Flares become visible in soft X-rays due to the "evaporation" of chromospheric material, and its heating, which forms the well-known flare loops. This mass then returns gradually to the chromosphere as it cools. One long-standing puzzle in solar flare physics concerns the origin of large non-thermal broadenings in the profiles of blueshifted high temperature lines during this evaporation process, which have been observed since the 1970s in the spectra of highly ionized atoms. Popular candidates to explain such large broadenings include superposition of flows along the observer's line-of-sight from individual loop threads, Alfvén-wave and MHD turbulence, and very large ion temperatures. Thanks to its high spatial (0.33 Â), spectral (1-2 km/s) and temporal resolution (~2 s), IRIS observations in the Fe XXI line (T~10MK) during flares present a unique opportunity to distinguish between these different possible mechanisms and provide new insights into the understanding of the energy transport process in flares. IRIS observations typically show fully blueshifted Fe XXI profiles at the flare ribbons which are also symmetrically broadened around the line center (with non-thermal velocities of up to ~100 km/s), and persist for several minutes during the impulsive phase (Ref. [1]).

We have now investigated whether the superposition-of-flows scenario can explain these IRIS observations (Ref. [2]). This scenario assumes that multiple magnetic loop threds may independently undergo flaring, at scales below the telescope resolution.

Figure 1: IRIS observation of the SOL2014-09-10 X-class flare. (a) IRIS slit-jaw 1400 Â image showing the flare ribbons and the location of the IRIS slit (vertical line). (b-d) Two examples of broad and symmetric Fe XXI spectra at the locations indicated by the colored symbols in panel (a). (c-e) Fe XXI de-blended profiles. The inserts illustrate the RB (red-blue asymmetry) method, with the values of RB normalized to the peak value, and including a large error estimate.

Figure 1 shows a typical IRIS observation of evaporation upflows in the Fe XXI line. After removing blends from neighboring lines, the Fe XXI profiles appear broad and mostly symmetric, as shown by the low values of red-blue asymmetry (~2%, or within ~9% of the line peak, allowing for a conservative error estimate). We compare the IRIS observations with the predictions of a multi-thread flare models using a 1D radiation hydrodynamic code. Figures 2 and 3 show synthetic Fe XXI spectra, obtained by superposing field-aligned upflows along the line of sight, assuming different multi-thread models. Panel (1) shows the simplest models, where the loops are all co-spatial within the same IRIS pixel and the loop bundle has either zero inclination angle between the plane of the loop and the LOS direction (Model 1) or is inclined by a certain angle (Panel 2). A more complicated modeling approach is illustrated in Figure 3, where it is assumed that the loops are rooted in different locations along the ribbons (Model 3) or the loop bundle has an expanding cross section (Model 4). In all cases, the synthetic profiles are broad (in agreement with the observations) but also show a significant blue asymmetry (~20-30% of the line peak). This is not typically observed in the IRIS Fe XXI spectra. Actually symmetric profiles can only be found in narrow synthetic spectra, which are also not compatible with the observations. 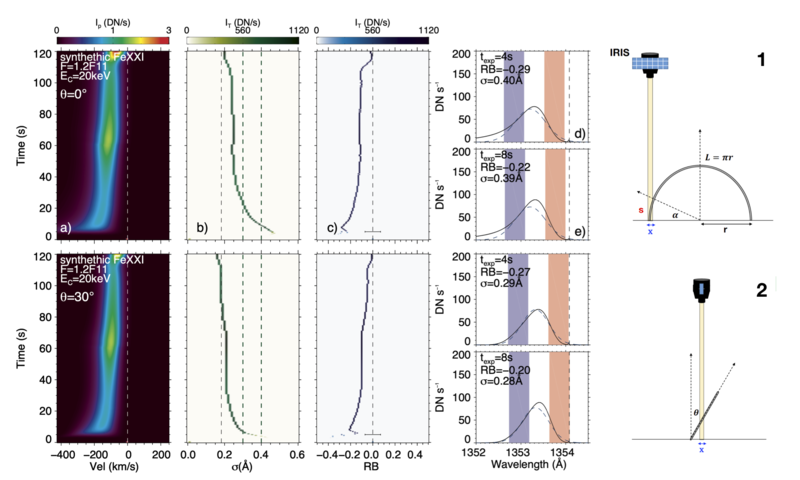 It seems difficult to produce simultaneously broad and symmetric Fe XXI profiles with the superposition of flows alone. We speculate that other processes, such as very large ion temperatures (40 to 60 MK, as suggested in Ref. [3]), or isotropic or Alfvenc turbulence may be required to explain these recent high-resolution observations. This result is in agreement with early predictions found in Ref. [4].

Figure 3: Synthetic Fe XXI spectra for multi-thread models 3 and 4 and different inclination angles θ as indicated in the legends.