With the excellent imaging capability of RHESSI, coronal hard X-ray (HXR) sources have been identified in a large number of solar flares. Since coronal HXR sources are located near the site of coronal magnetic energy storage, they can provide an important clue to particle acceleration and energy release. According to a statistical survey [1], many coronal sources contain a significant nonthermal component with a power-law HXR spectrum.

A nonthermal spectrum may appear as an upward-broken power law, with the break energy (Eb) usually found at around a few hundred keV [2]. At least two scenarios have been proposed to explain such a spectral feature. One scenario attributes it to the superposition of sources with different power-law indices, and the other scenario suggests that the broken-up spectra originates from energetic electrons with an intrinsic broken-up energy spectra, as a result of acceleration or transport during flares.

In this Nugget, we report a limb flare for which we found broken-up HXR spectra using spatially-resolved RHESSI HXR data [3]. RHESSI's imaging capability allows us to identify the coronal source, which we find to have a break energy Eb much lower than that reported in previous events.

Our event is the well-studied SOL2017-09-10T16:06 (GOES class X8.2) flare, which occurred in AR 12673 just at the west limb of the solar disk (see the EUV images from AIA in Figure 1. The HXR flux peaks at 15:58 UT (t1), while the SXR flux peaks at 16:04 UT (t2), as recorded by RHESSI and GOES. We find that both coronal and foot-point HXR sources appear at the beginning, and around the flare peak (from t1 to t2) the coronal sources at various energies appeared around 20 to 30 arc sec above the disk, co-spatial with each other. The foot-point sources (identified as the anchor points of coronal magnetic loops) disappeared with time. 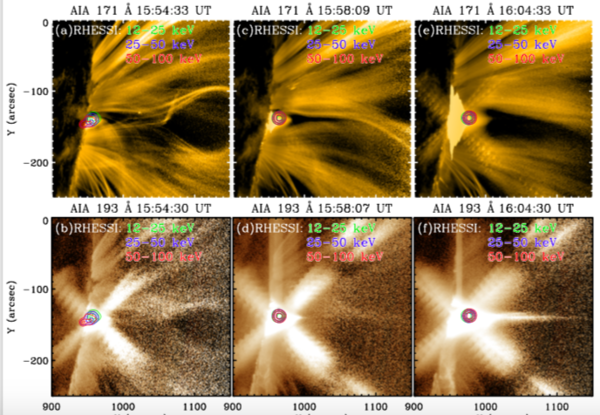 Unfortunately, by the time of the event, the RHESSI detectors had suffered from accumulated radiation damage after a long history of operation. This degradation tended to reduce the detector resolution, exacerbating the pileup problem, where multiple photons can contribute to a single detected event. This effect can be very significant, especially when observing extreme flares like the one investigated here. Thus, an appropriate pileup correction is necessary for further spectral analysis.

We test possible pileup effects by using different values of a correction factor p in fitting the spectra at t1 and t2. When p is set to 1, the default value, the spectra can be fitted with two thermal components and a broken-up spectrum. Since a more significant pileup effect is expected, a larger value of p should be used. We therefore test the spectral fitting by setting p equal to 2 and 3. Similar results with a broken-up spectrum can be obtained for both cases with a reasonable value of χ2. Pushing further, with p = 3, results in an unrealistically high [emission measure] - about 1054 cm-3 much higher than that obtained with p = 1-2, of order 1051 cm-3. The higher value would conflict with [microwave] observations of this event, not discussed here, and also lead to unrealistically high densities within the HXR source region. We therefore set p = 2 for further analysis.

In Figure 2 (a--b), we plot the spatially integrated spectra, fitted with two thermal and one broken power-law components with p = 2. We obtained (a) Eb = 45.8 keV, γ1 = 5.67, and γ2 = 3.27 t1 and (b) Eb = 50.3 keV, γ1 7.45, and γ2 3.11 at t2. A significant broken-up feature with a distinct break energy appears at both times. Note that the spectra can also be fitted with two thermal components and one single power-law spectrum with a slightly higher value of χ2 and a much higher temperature (nearly 40 MK). Such a temperature is higher than that deduced with GOES soft X-ray data (about 30 MK) for the same event. This indicates that the single power law fitting may be inappropriate, though it cannot be completely rejected. 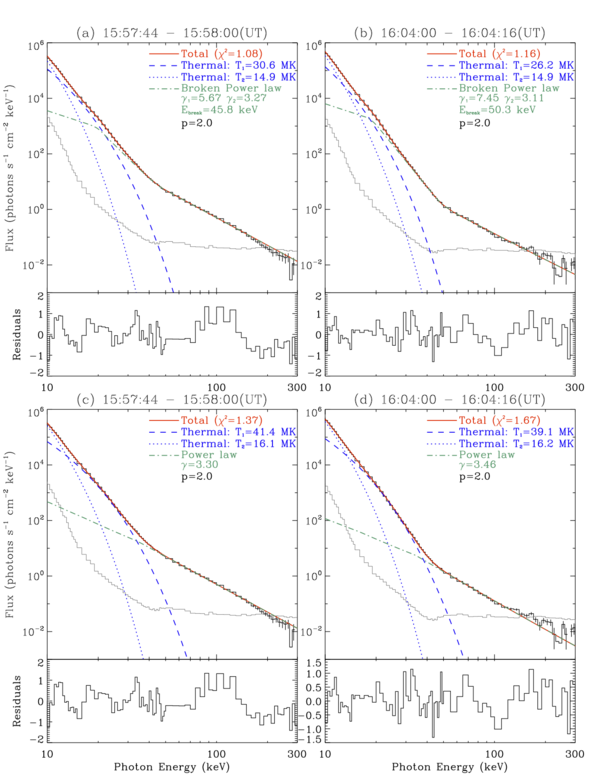 Figure 2: Spectral fitting results with different models of spatially-integrated RHESSI flux spectra at t1 (panels a and c) and t2 (panels b and d). The coefficient of pileup effect p is set to 2. In panels (a)--(b), the nonthermal part of the spectra is fitted with a broken power law, and in panels (c)--(d) fitted with a single power law. The histograms with black error bars are the background-subtracted spectra, and the background is given in gray. The normalized residuals are shown as the histograms in bottom panels.

Our RHESSI data analysis of SOL2017-09-10, a hugely powerful limb flare, found significantly broken-up spectra of the coronal HXR source. After several tests, we chose pileup correction factor p = 2 and could fit the RHESSI spectra with two thermal and one broken-up components. We also found that at the flare peak time, the density at the loop top is rather high (about 1011 cm-3), indicating collisionally thick [bremsstrahlung] in the corona. This may explain the absence of foot-point sources around the flare peak time.

Since the foot-point sources are not visible during the flare peak time, the broken-up spectra is associated with the loop-top source, rather than a result of summation of different sources. The broken-up photon spectra are likely to originate in a corresponding broken-up energy distribution of electrons, which is caused by either acceleration or transport process, or their combination. Further studies are needed to confirm the presence of broken-up spectral feature of the coronal source and figure out the exact underlying process(es), with data of higher quality from future X-ray instruments such as those aboard ASO-S or STIX aboard Solar Orbiter.