This nugget sets the stage for future discussions of hard radiations (X-rays and gamma-rays emitted from the corona by flare-associated non-thermal particles. This is a field of RHESSI observation is likely to add important new information, but we will just discuss historical events here. Note that there have already been a couple of Nuggets on emissions from the quiet Sun, but this is a different subject. Here we are talking about individual sources in the corona (as in this Nugget) Here we discuss two events that occurred long ago (i.e., prior to RHESSI) and could only be identified as coronal by circumstantial arguments. Since we did not have imaging capability, we had to rely upon solar occultation (see figure 1). As the sketch below shows, occultation quickly hides any source in the low corona, such as footpoint or albedo sources. 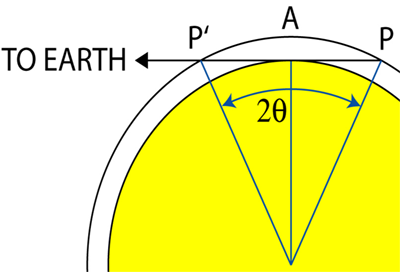 Figure 1. This sketch shows the geometry for a limb-occulted solar flare (from a 1975 paper by David McKenzie). As the Sun rotates and carries an active region beyond the solar W limb (point A on the sketch), the minimum visible height (at point P') increases quadratically in altitude. One day's worth of solar rotation corresponds roughly to about 20,000 km height, and two days to a large fraction of a solar radius. In the sections below we comment on two historically important events: March 30, 1969, as described in Ref. [1]; and a gamma-ray event of SOL1989-09-29 reported by Tom Vestrand and Dave Forrest (Ref. [2]).

This event (Figure 2) really surprised us - way back 35 years ago! The authors, in fact, did not even comment on the fact that the parent flare was on the back side of the Sun, so it was quite unthinkable then that the hard X-ray emission observed by OSO-5 (the fifth Orbiting Solar Observatory, launched in 1969) could physically have come from the tenuous corona. We will be more quantitative about this bald statement in a future science nugget. 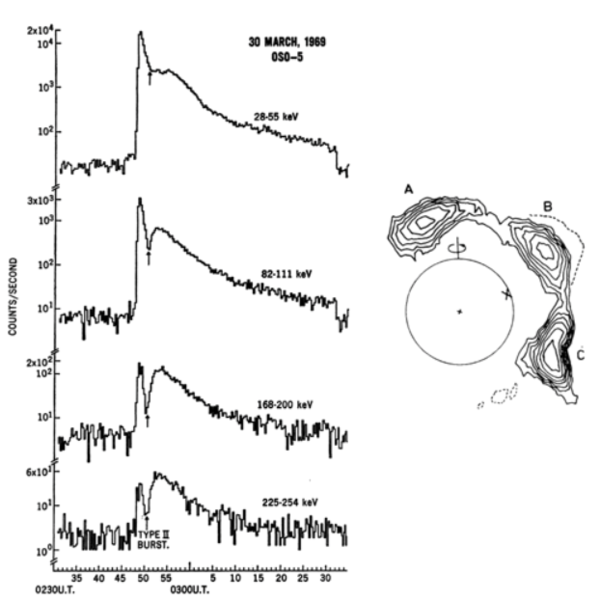 Figure 2: The Frost & Dennis event SOL1969-03-30. Left, the hard X-ray light curves. Although the corona at the altitude of this event is very thin, the hard X-ray source was not only bright but had a hard spectrum! This is still very difficult to understand. Right, image from the Culgoora radio telescope in Japan, showing a remarkable set of sources wrapping around the invisible, high-altitude limb of the meter-wave Sun. The radio observations (right panel above and other material not discussed here) helped to make the conclusive identification of the X-ray emission as coronal in origin. Alas, the Culgoora radioheliograph is now defunct - the ATCA (Australia Telescope Compact Array) runs right through it. So observations of this type are not possible now.

Even more astonishing than the idea of hard X-rays from the corona would actual gamma-rays, which have even lower emissivities. What Vestrand & Forrest found in this event was the emission of 2.223 MeV photons from neutron capture. A previous nugget shows a good example of this emission line, which had been predicted by the late Philip Morrison as a gamma-ray line of potential astrophysical significance. The neutron-capture emission in this event, for various technical reasons, appears to require the existence of an extremely diffuse coronal source, rather than a high-density chromospheric/photospheric source at the footpoint of a coronal loop. Again, a huge surprise. 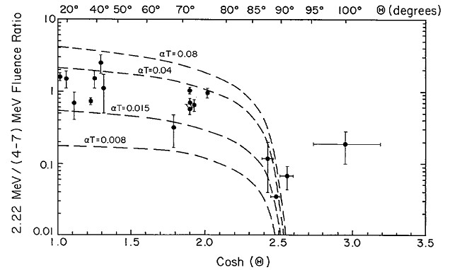 Figure 3: The Vestrand & Forrest event of Sept. 29, 1989. The event in question is the point plotted at the extreme right of this plot of gamma-ray spectral ratio (neutron-capture to total inelastic line strength, or 2.2 MeV vs 4-7 MeV) vs limb distance.

This nugget has presented two early non-imaging observations that strongly suggested the idea that the gossamer-like corona could actually emit burly hard X-ray or gamma-ray photons at tens of keV or even MeV energies. There were other clues and analyses, so gradually the astonishment has worn off a bit, but still there is a substantial lack of physical understanding. RHESSI is now taking giant steps towards achieving this understanding, thanks to its imaging spectroscopy, and we will deal in more detail with actual RHESSI observations of related events in future nuggets.

== Biographical notes ==: Hugh Hudson is a RHESSI team member based at UC Berkeley.