RHESSI, an X-ray imaging instrument, and EVE , an EUV spectrometer, can be used in combination to obtain the solar flare Differential Emission Measure (DEM) from about 2 to 50 MK. (Ref. 1). Figure 1 shows an example. The left hand plot shows a measurement for a single time interval during a solar flare of 13 February 2011 (SOL2011-02-13T17:28 - GOES class M6.6). In the plot, the black curve is the DEM calculated using EVE data only, the red curve is the DEM calculated using RHESSI data, and the blue curve is the DEM which is fit to both instruments simultaneously. The right hand plot shows the same curves for multiple time intervals during two flares, the 2011 February 2013 flare and a flare two days later, SOL2011-02-15T01L44 (GOES class X2.2). The curves are normalized to remove time variation. From the plots, it is clear that the combined DEM follows the EVE DEM at low temperature (less than 10 MK or Log(T) = 7) and it follows the RHESSI DEM above 10 MK. The high T component (40 MK, Log(T)=7.6) that often appears in the EVE-only solutions is suppressed when RHESSI is included, and the low T component (5 MK, Log(T)=6.7) for RHESSI-only, which does not reflect reality, is likewise suppressed when EVE is included. 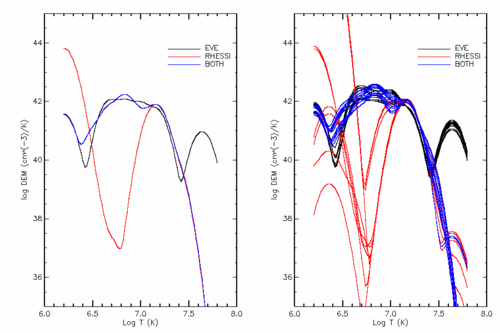 Figure 1: Comparison of DEM functions for EVE (black), RHESSI (red) and EVE-RHESSI (blue) for a single time interval on the left, and for multiple intervals (scaled to remove time variations) on the right, for flares of 2011 February 13 and 2011 February 15.

In a recent paper, (Ref.2) the combined EVE-RHESSI DEM was used to help estimate the elusive low-energy cutoff for nonthermal electrons. In this work the cutoff energy is related to the energy at which the presence of thermal emission forces any nonthermal spectrum to have a sharp downwards break. The concept is illustrated in Figure 2, which is a model of a typical RHESSI spectrum. For low energies, 5 to 10 keV, the emission is dominated by bremsstrahlung emission from hot plasma (aka the "thermal component"). At higher energies above 30 keV, the emission is (presumably) bremsstrahlung from accelerated electrons ("nonthermal component"). In between, both kinds of emission may exist. If we extend the nonthermal line from high energy back to 0 keV, then there would be an infinite amount of energy in the nonthermal, so there must be a minimum or "cutoff" energy for those electrons. (Ref. 3) In the Figure, the cutoff energy is 10 keV. This cutoff is an important parameter when calculating the energy content in nonthermal electrons. It is, however, obscured by the thermal component. For the best estimate of the cutoff, the thermal component needs to be accounted for as accurately as possible. The DEM calculation gives a better approximation for the thermal emission than the single temperature, or isothermal, approximation that is often used in this sort of calculation. 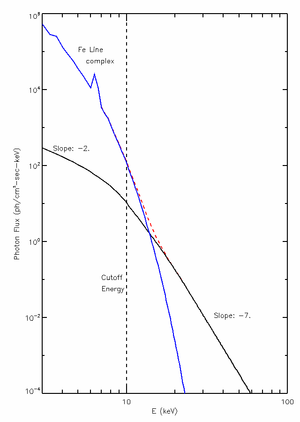 Figure 2: Model thermal (blue) and nonthermal (black) photon spectra in the RHESSI energy range. The cutoff energy for the nonthermal spectrum is 10 keV, and the Fe line complex in the 6 to 7 keV range is clearly visible. The "crossover" energy, where the thermal and nonthermal components are approximately equal, is about 18 keV.

Typically, the amount of thermal emission relative to nonthermal emission increases during flares, so the calculations were done during the first two minutes of each flare in the sample. There were 38 flares in the sample, and 61 time intervals from those flares were investigated.

It turns out that the estimate of cutoff energy depends critically on the ratio of flux in the 6-7 keV Fe line complex (shown in Figure 2) to the continuum emission in the 10 to 20 keV range. This ratio is sensitive to temperature; for the combined DEM, the need to fit EVE data in addition to RHESSI data results in a DEM which has a much lower average temperature (of order 10-12 MK) than would be obtained using RHESSI alone (roughly 20 to 25 MK). For most of the time intervals, the amount of emission seen by RHESSI in the Fe line complex and the relatively low temperature limits the allowable amount of thermal continuum emission and requires a substantial amount of nonthermal emission in the 10 to 20 keV range, resulting in a cutoff energy less than 10 keV. 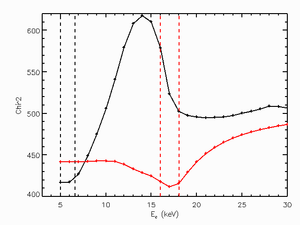 Figure 3:Chi-squared versus cutoff energy in keV for the time interval 2011 February 13, 17:32:36 to 17:33:36 UT. The black curve shows results for the coronal abundance assumption, and the red curve is for photospheric abundance. The vertical dashed lines show upper and lower limits for the cutoff energy for each model; these are based on the 99% confidence limit of the chi-squared distribution.

1) EVE-RHESSI DEM models can fit data for both instruments simultaneously and give useful constraints for the low energy cutoff for nonthermal emission early in solar flares.

2) For coronal abundance, the cutoff energy is typically low (less than 10 keV), and is limited by the relatively low average temperature of the combined EVE-RHESSI DEM, and the high Fe abundance.

3) For photospheric abundance, the cutoff energy is typically approximately 10 keV higher than for coronal abundance.

3. "The Deduction of Energy Spectra of Non-Thermal Electrons in Flares from the Observed Dynamic Spectra of Hard X-Ray Bursts" J. C. Brown

4. "The Potential for Plasma Diagnostics from Stellar Extreme-Ultraviolet Observations" U. Feldman et.al.