Energy goes up... but doesn't come back down! Coronal heating?

As noted here recently, it was recognized more than 70 years ago (Ref. [1]) that the temperature of the solar corona is over a million kelvin, much hotter than underlying photosphere, which is near 6000 kelvin. This is the crux of the coronal heating problem: How is the outer atmosphere of the Sun heated to much higher temperatures than its photosphere? From RHESSI's point of view, this question relates to the quiet-Sun emission studied in this earlier Nugget and still earlier ones cited therein.

The second law of thermodynamics implies that the energy required to maintain coronal temperatures cannot flow outward as heat. (Hot material might flow upward to heat the corona from below --- but this energy transport must be non-thermal, e.g., spatially coherent jets of heated plasma like those reported by Ref. [2]). The situation is similar for the 104 K chromosphere, which is also substantially hotter than the photosphere. Consequently, non-thermal energy transport is required to move energy from the energy reservoir of the solar interior past the photosphere before it is deposited as heat in the chromosphere and corona.

E. N. Parker proposed three decades ago that turbulent convective motions in the near-surface plasma could "braid" the footpoints of coronal magnetic fields, thereby inducing electric currents in the corona; and that the magnetic energy stored in the coronal field due to these currents could then be dissipated to heat the chromosphere and corona. The obligatory cartoon: 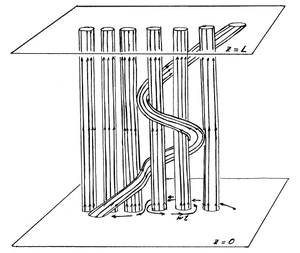 The induced currents might be characterized as either steady or rapidly varying (e.g., wave-driven) relative to the timescales of the atmospheric response, and the dissipation of each has been referred to as "DC" (direct-current) or "AC" (alternating-current) heating (e.g., Ref [3]).

Can we observe the upward transport of magnetic energy that drives heating in the outer solar atmosphere?

where the h subscripts refer to horizontal components of vectors. This expression for total vertical Poynting flux has been conceptually divided into an "emergence" term, which contains vz, and a "shear" term, which contains vh (e.g., Ref [5]). In fact, a positive (upward) value for the shearing term also implies the emergence of magnetized plasma across the photosphere. This is because a positive value implies a non-zero component of the photospheric velocity perpendicular to B that is upward. Flows parallel to B can be ignored, since they cancel out in the equation for Sz. Upward transport of a tilted magnetic field is the archetypal evolution here, and it does not increase the total unsigned magnetic flux threading the photosphere. (This is in contrast to the emergence of new, or additional, magnetic flux, which must occur at a polarity inversion line.)

Plage magnetic fields are unipolar, nearly-vertical fields associated with active regions that are more coherent and typically stronger than quiet-sun fields, but weaker than sunspot (umbral) fields; see, e.g., Ref. [6]. Plage fields are ideal observational targets for estimating energy injection by convection, because they are: (i) strong enough to be measured with relatively small uncertainties; (ii) not so strong that convection is heavily suppressed (as within umbrae); and (iii) unipolar, so Sz in plage is not influenced by flux emergence, which cannot explain apparently steady heating in stable, active-region fields. For observations of B in plage regions that include an estimate of the filling factor f, the upward flux of magnetic energy is approximately given by (Ref. [7])

Hence, estimating Szplage requires both a vector magnetic field measurement and an estimate of vh. Welsch et al. (2012) used local correlation tracking (LCT) to estimate vh from a sequence of line-of-sight magnetograms of NOAA AR 10930 observed by the Narrowband Filter Imager (NFI), part of the Solar Optical Telescope (SOT) aboard the joint Japanese/U.S./U.K. Hinode satellite. From simultaneous observations recorded by the SOT's SpectroPolarimeter (SP), B. Lites and the late T.R. Metcalf estimated the vector magnetic field and filling factor. Yeates et al. (2014) and Welsch (2014) combined these results to estimate the Poynting flux in two small regions of plage. They found both upward and downward energy fluxes, but the net energy flux was upward (positive in our sign convention) in both regions. The left panel of Fig. 2 shows a map of B and vh from the region studied by Welsch (2014), and the right panel shows the corresponding Poynting flux map. The user-set "windowing" parameter used by the LCT code was set to 4 pixels to produce this flow field, corresponding to about 1.3 arcsec (or roughly 1 Mm in this near-disk-center region). The average upward energy flux from the region shown in Fig. 2 is near 5 x 107 erg cm−2 s−1, higher than the combined chromospheric and coronal energy demands estimated by Withbroe & Noyes (1977) nearly 40 years ago. 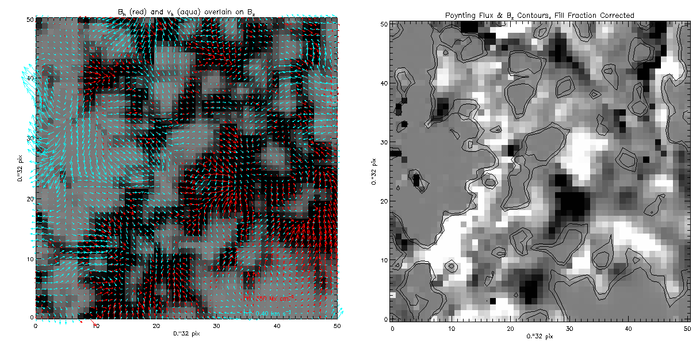 Essentially all models of coronal heating assume that energy stored in magnetic fields is the ultimate source of the energy later observed as heat. And this energy must originate in the solar interior, so there must be a net positive (outward) Poynting flux. But the spatial and temporal scales on which the bulk of this energy crosses the photosphere are not known.

So it is possible that the two regions (both about 12 Mm on a side) of positive Poynting flux found by Yeates et al. (2014) and Welsch (2014) might be flukes of sampling: at the spatial and temporal scales (about 1 Mm and about 8 minutes, respectively) on which they estimated B and vh, the Poynting flux might be negative in just as many plage regions as it's positive. To test this, we identified all "plage-like" pixels in AR 10930, defined to be pixels for the filling-factor-weighted |Bz| was between 100 and 1500 Mx cm−2 and inclinations were less than 30 degrees from vertical. Contours in Fig. 3 outline areas identified as plage-like. 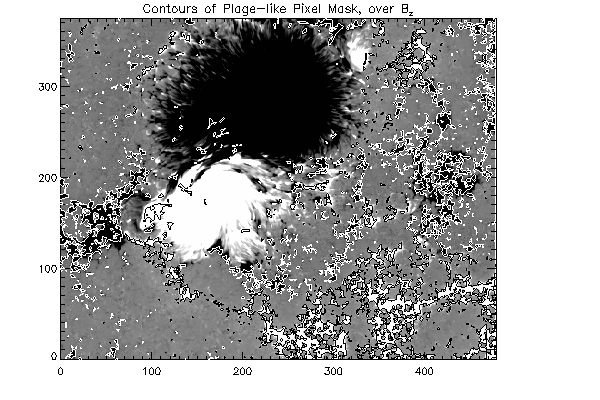 Fig. 3: Grayscale map of filling-factor-weighted Bz, on which contours outlining groups of "plage-like" pixels have been overlain. These pixels have unsigned pixel-averaged flux densities between 100 and 1500 Mx cm−2, and B is within 30 degrees of vertical.

We then compared the distributions of Poynting fluxes in the upward- and downward-Poynting-flux sub-populations of plage-like pixels. As can be seen in Fig. 4, the upward-flux pixels outnumber the downward-flux pixels across most of the range of Poynting flux values. Consequently, we conclude that, at the spatial and temporal scales of our observations, the Poynting flux appears to be systematically positive. This is consistent with magnetic energy primarily propagating along magnetic fields --- up from some photospheric footpoints, and back down at the conjugate footpoints --- with relatively minor losses to heating along the way. 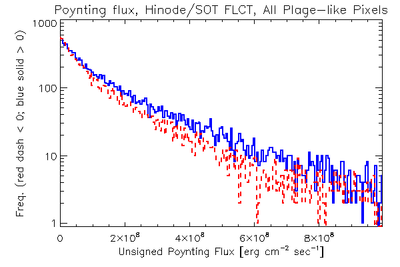 This is a notable result, because it is plausible that a lot of energy is supplied to the outer atmosphere on smaller spatial scales and faster time scales. It might be the case, however, that much of the energy input occurs on scales we can now resolve. This can only be settled, of course, with (cue the choir, to recite the well-known observer's chorus...) observations at higher resolution! So we are happy that construction of DKIST is underway, and hope that the Japanese-led Solar-C mission concept will be realized!

What do the chromosphere and corona do with the magnetic energy that goes up, but doesn't come back down?

Conversion to heat is a plausible answer, but can we observe this? We plan to compare Poynting flux maps with observations of emission from the overlying atmosphere with IRIS and AIA, to search for correlations in space and time.

The Poynting flux features in Fig. 2 are roughly 3 arcsec across, meaning that RHESSI's limited spatial resolution (and dynamic range) preclude its use to find impulsive, small-scale atmospheric heating events associated with these sites of energy input. The launch of focusing optics for hard X-rays (HXR), however --- such as FOXSI and HEROES --- suggests that next-generation HXR observations might also be useful for this purpose. Indeed, FOXSI's spatial resolution is already close to the scale of energy input that we observe.

We might be stymied in our attempts to find temporal and spatial correlations, though: energy can both be stored within and propagate along magnetic fields, so the times and locations at which energy is injected might differ significantly from when and where energy is released as heat.

(It should also be mentioned that this energy flux might not actually play any significant role in coronal heating: perhaps turbulence driven by convective forcing causes this magnetic energy to cascade (much as kinetic energy in turbulent flows cascades) to some unobservably small or fast scale, and then return to the solar interior without significant dissipation! If so, the corona would be heated by energy flowing outward on yet a different scale.)

Also, the oft-cited estimates for the chromospheric and coronal energy demands made by Withbroe & Noyes (1977) are now quite dated. Given that excellent instruments such as IRIS, EVE, AIA, and XRT are aloft, more precise estimates can surely be made, and should be.

[2] "The Origins of Hot Plasma in the Solar Corona"

[3] "On Solving the Coronal Heating Problem"

[7] "Magnetic Properties at Footpoints of Hot and Cool Loops"

Retrieved from "https://sprg.ssl.berkeley.edu/~tohban/wiki/index.php/Energy_goes_up..._but_doesn%27t_come_back_down!_Coronal_heating%3F"
Category: Nugget
Facts about Energy goes up... but doesn't come back down! Coronal heating?RDF feed