The Fermi γ-ray observatory has shown that powerful solar eruptive events often emit copious fluxes of high-energy (>100 MeV) γ-rays, at times after the impulsive flare phase. These observations have become a powerful tool with which to explore the high-energy processes, such as particle acceleration, that constitute a major part of the eruptions' physical development. There have now been several Nuggets discussing what was earlier referred to as Long Duration Gamma-Ray Flares, including (No. 179, No. 227, No. 300, and recently No. 370, as well as No. 373)

Based on a detailed study of thirty >100 MeV γ-ray events observed by Fermi LAT, we decided that Late Phase Gamma-Ray Emission (LPGRE) best describes the characteristics of this phenomenon (Ref [1]):

1) the γ-ray emission is from pion decays;

2) it can begin close to the onset of the impulsive solar flare, but with a distinctly different time history, or up to two hours later;

3) rise times range from a few minutes to 6 hr and durations from 5 minutes to 20 hr;

6) LPGRE and >100 MeV solar energetic particle (SEP) durations appear to be correlated and the number of >500 MeV protons producing the LPGRE appear to range from 0.1 to 50% of the number in the accompanying SEP with large systematic effects; and

7) accompanying >100 keV impulsive bremsstrahlung suggests the presence of a suprathermal flare proton seed population that is accelerated by a shock wave and contributes to the LPGRE.

These characteristics support suggestions, beginning as early as the 1980's, that LPGRE is produced by the same CME-shock acceleration process that accelerates SEPs (Ref [2]). However, this premise is not universally accepted. In this Nugget we discuss a recent study (Ref [3]) of the 2017 September 10 solar eruptive event that produced high-energy γ-ray emission having a complex time history (Ref [4]) and a ground-level enhancement (GLE) designated as GLE72 (a numerical index) that began with SOL1956-02-23.

We examine a common shock-acceleration origin for both the LPGRE and GLE72. The >100 MeV γ-ray emission observed by the Large Area Telescope (LAT) on the Fermi satellite exhibits a weak impulsive phase, consistent with that observed in hard X-and γ-ray line flare emissions, and what appear to be two distinct stages of LPGRE. From a detailed modeling of the shock wave, we derive the 3D distribution and temporal evolution of various shock parameters, and we examine the shock wave magnetic connection with the visible solar disk. The evolution of shock parameters on field lines returning to the visible disk mirrors the two stages of LPGRE. The time history of shock parameters magnetically mapped to Earth agrees with the rates observed by the Fort Smith neutron monitor during the first hour of the GLE72 if we include a 30% contribution of flare-accelerated protons during the first ten minutes, having a release time following the time history of nuclear gamma-rays.

Comparison of Gamma-Ray Observations with Results of Shock Modeling

The black data points in Figure 1 show the time history of the >100 MeV γ-ray fluxes over the whole event and for the first 30 minutes (inset). 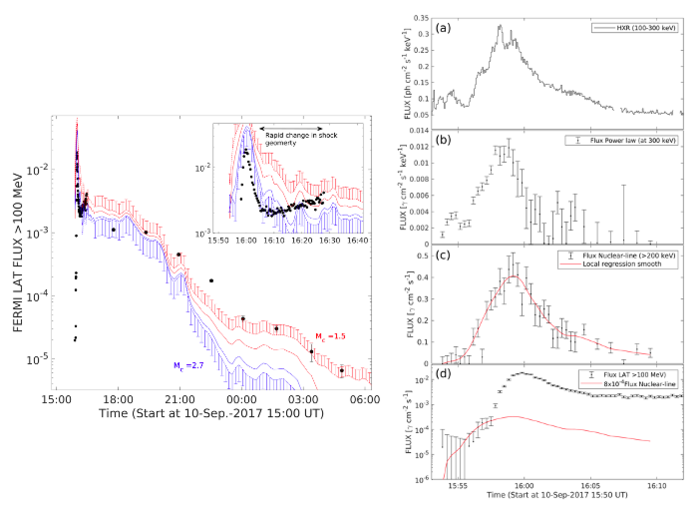 Figures 1 and 2: Left, Comparison of the >100 MeV γ-ray time history with an empirical shock model for different critical Mach numbers. The inset shows a blowup covering the first orbit of LAT observations. Right, Time histories of a) 100-300 keV emission, b) amplitude of >300 keV bremsstrahlung observed by GBM, c) nuclear deexcitation line emisson observed by GBM, and d) >100 MeV γ-rays during the first 15 minutes of the event.

We compare the time history of this high-energy emission for the first 15 minutes with lower energy emissions in Figure 2. The 100-300 keV (RHESSI) plot in panel a) shows the impulsive flare bremsstrahlung that extends to >1 MeV based on fits to the Fermi/GBM spectra (panel b). These fits also reveal the presence of nuclear de-excitation γ-ray lines produced by flare-accelerated ions (panel c). There is evidence for this flare component in the first minutes of >100 MeV γ-ray emission before the rapid rise of the first stage of LPGRE at ~15:58 UT (panel d). The second stage of LPGRE becomes evident after 16:05 UT. Observations at later times indicate that there was a striking decrease in the flux between 16:30 and 18:00 UT. We set out to determine whether what appear to be at least two stages of LPGRE can be explained by CME related shock acceleration of protons onto magnetic field lines returning to the visible solar disk. This study follows the CME mapping and shock parameter procedures adapted in (Ref [5]). We used 3D modelling of the CME expansion into the corona and interplanetery space to model various shock parameters with time. In Figure 3a we plot the density compression ratio along the shock front at 16:00 UT. This ratio is a measure of the efficiency for particle acceleration. In Fig 3b we plot representative field lines connected to the shock front, color coded with the density compression ratio. In Fig 3c we plot the ratio as projected onto the solar disk by these field lines. At this time, the highest ratios, and therefore most of the particle acceleration, appears to occur on closed field lines emanating from the active region with distant footpoints forming an ellipse. The pink shaded region is not visible from Earth. Similar plots can be made for Alfvenic Mach number and magnetic field direction relative to the shock normal. 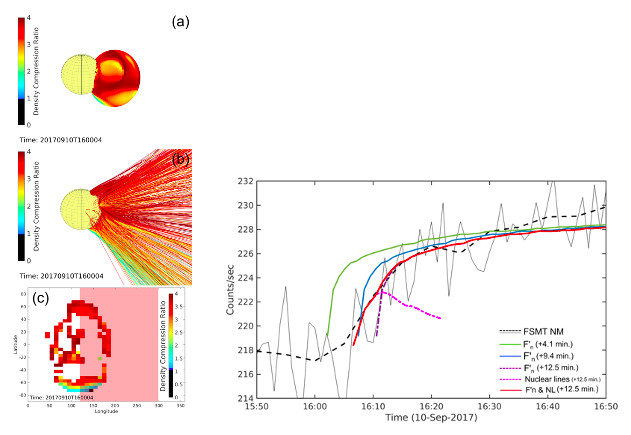 Using this technique, we made maps of shock parameters on the visible solar disk as functions of time to construct their temporal evolution. In order to more accurately estimate the proton impact at the Sun, we took into account the probability that the particles could reach the Sun in the presence of a converging magnetic field. In Figure 1 we plot, as blue and red bands, an empirical parameter (dependent on this probability and the Alfvenic Mach number) that estimates the number of particles reaching the Sun. The bands are plotted for different critical Mach numbers (Mc) determined by the local conditions at the shock front. This normalized parameter reproduces both the narrow first stage peak at 16:00 UT and the hours-long second stage of emission. The rise in flux after 16:08 UT, shown in the inset, can be explained by the rapid change in shock geometry from quasi-perpendicular (Mc=2.7) to quasi-parallel (Mc=1.5). The apparent discontinuity in flux between ~16:30 and 18:00 UT is explained by the large increase in magnetic repulsion encountered by particles returning to the Sun from locations with low field strengths.

We have not attempted to take into account the effects of magnetic turbulence in this study, but its effects become apparent when we compare the model's broad spatial distribution of particle interactions on the visible disk with the location of the centroid of the γ radiation at the active region (Ref [4]). This difference can be explained by a large amount of turbulence, and therefore particle precipitation, near the active region relative to other locations on the visible disk.

Comparison of Neutron Monitor Observations with Results of Shock Modeling

We also investigated whether particle acceleration at the shock where it crosses field lines reaching Earth can explain the time history of relativistic protons observed early in the GLE observed by the magnetically well connected Ft. Smith neutron monitor. The calculated time histories, corrected with three potential proton transport times, are shown in Figure 4, along with two- and five-minute neutron monitor rates. The red curve shows the best fit to the neutron monitor data allowing for both shock and flare (using the nuclear line time profile shown in Figure 2) particle components and a proton transport time of 12.5 minutes. Flare particles only contributed about 30% to the total rate for the first ten minutes of the event that is dominated by the shock component. The large proton transport time suggests a significant amount of interplanetary turbulence.

Our analysis of the 2017 September 10 event provides evidence for a common shock origin for protons producing the LPGRE and most of the particles observed in GLE72.

We thank Alexis Rouillard, Illya Plotnikov, Ronald Murphy, Athanasios Papaioannou, and Yihong Wu who made significant contributions to this work.