The phenomenon of "coronal rain," a recent APOD topic, has has an extremely close identification with the physics of solar flares. More recently it has also become detectable in the quiet Sun, thanks to the greater sensitivity of modern high-resolution observations, but that is separate interesting story. In this phenomenon, which had been noted as hydrogen H-alpha observations became commonplace in the early 20th century, material appears to condense as though magically out of the near-vacuum of the solar corona, and to cascade down along trajectories that certainly outline the orientation of the pervasive magnetic field there. Obviously matter is not being created, and a basic theoretical explanation was provided in 1965 by George B. Field (Ref. [1]). The magical appearance in H-alpha is just due to the sudden recombination of hydrogen, which of course allows this line to emit, into its neutral state.

The state of the flare-related hot plasma prior to its condensation into visible forms is now well understood, thanks to the development of radio and X-ray observational techniques. A flare results when energy is released from the solar corona; this has the inevitable consequence of driving material up into the corona, and somewhat mysteriously heating it at the same time. In the most extreme cases this erupting materia escapes from the Sun in the form of a coronal mass ejection. The hot plasma cools and loses energy steadily after its creation, and finally reaches the point at which it requires a catastrophic state change. A recent RHESSI Science Nugget describes some of the manifestations of the hot, over-dense loop-like structures that result from this cycling of mass between the lower and upper solar atmospheres.

The Heliospheric and Magnetic Imager instrument (HMI) on board the Solar Dynamics Observatory is now providing a wholly new view of the last stages of development of the coronal mass cycle. As the loops cool, Field's thermal "instability" produces a bright enough excess emission to be visible even in the low corona by a non-occulting solar telescope such as HMI - not optimized in any way, as a coronagraph would be, to see the normally faint corona. A recent paper (Ref. [2]) has revealed several features observed in this way by HMI, which is an excellent surprise to all concerned. HMI makes comprehensive spectroscopic measurements with full diagnosis of the polarization, a powerful aid in learning about the emission mechanisms involved. 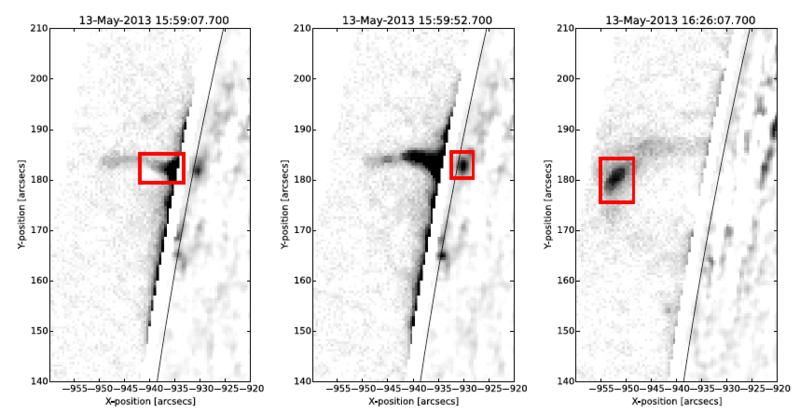 Fig. 1: HMI intensity observations at three times during the flare SOL2013-05-13T16. These are difference images relative to a preflare frame, and the left portion of each has been multiplied by a factor 80 to enhance the visibility of the features in the corona. The red boxes mark particular features, specifically (on the right) the white-light flare sites.

As the thermal instability progresses (see Ref. [3] for modern work on the dynamics of the hot plasmas), recombination happens, and suddenly low-excitation lines and continua can appear. We think that this is happening in some of the HMI coronal sources, in particular because we see downward motions in some of the ejecta. Figure 2 illustrates this for the source bracketed in the middle panel of Figure 1. To make this figure, we followed the outermost edge of the jet-like protuberance, using interleaved images from HMI's two cameras. This gives 1.88 s time resolution if one ignores niceties such as polarization and wavelength. 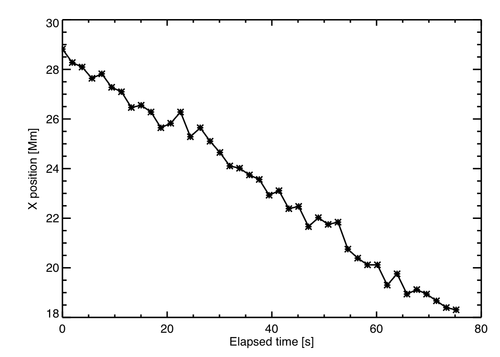 Fig. 2: Tracking the descent of the protuberance seen in the left and middle panels of Figure 1. Its steady motion towards smaller values of X corresponds essentially to the radial direction, towards Sun center.

The inferred velocity in the projection of Fig. 2, based on a fit to the points, is 134 ± 8 km/s. There is no perceptible acceleration. This is distinctly below the free-fall speed in the solar gravitational field, which is typical of coronal rain observed in other ways, but the theory is incomplete - the basic physics may be understood, but reasonable modeling of the terminal stage we observe does not yet appear to be available. HMI's design wavelength range brackets an Fe I line at 6173Å, but since the Fe has probably started off in its lithium-like configuration Fe XXIV (with two electrons), there may be substantial delays while the remaining two dozen electrons turn up to finish the job of recombination. Thus we think that what HMI sees may have substantial contributions from other wavelengths, in particular continua. We identify three interesting and probably open problems:

The observation of flare-associated coronal rain reported here opens a new window on this process, and one for which HMI can make an excellent contribution: it should see many cases, since it sees this one, and it will make polarization measurements of high quality as long as we stick to difference images.