The chromospheric double hard X-ray (HXR) sources generally appear at the conjugate footpoints of flaring loops, but with asymmetric flux distributions. One footpoint typically is brighter than the other. Such asymmetries could be associated with the process of particle acceleration in the corona, the transport process from the corona to the chromosphere, or the precipitation process into the chromosphere depending on the magnetic field configurations and plasma conditions of the flaring loops. The HXR footpoint asymmetry is observed to vary with time and even to reverse itself during a flare. The statistical study of Yohkoh flares shows that the HXR footpoints display almost the same asymmetry behavior in the low and medium Yohkoh/HXT energy channels [Ref. 1], and a earlier 2006 Nugget has already noted interesting features of the RHESSI view of this phenomenon.

On the other hand, the relationship between the chromospheric HXR fluxes and the photospheric magnetic field strengths has been investigated extensively in previous studies, but no particular preference of magnetic field region was found for the bright HXR footpoint. We attempt to address the energy dependence of HXR footpoint emissions, determine their relationship to the photospheric magnetic fields beneath, and discuss the causes of asymmetry reversal based on the RHESSI HXR observations during 2002-2009 and the corresponding pre-flare MDI magnetograms [Ref. 2].

Energy dependence of asymmetry: We use the parameter AH, as introduced by Alexander & Metcalf [Ref. 3], to quantify the HXR footpoint asymmetry: AH = (I2 - I1)/(I2 + I1). The wide distribution of AH in Figure 1 implies that the HXR footpoints could have different asymmetric behaviors in different energies, although there is no significant energy dependence of footpoint asymmetry in our statistical results. A feature of asymmetry reversal between different energy ranges is indeed observed in some of our studied events.

Fig. 1: Comparison of HXR footpoint asymmetry in different energy bands for all the selected flares, where the subscripts HL, HM, and HH represent the unsigned AH values derived from the defined low, medium, and high energy bands, respectively. A linear least-square fitting is denoted by the straight line in each plot to quantify the correlation. 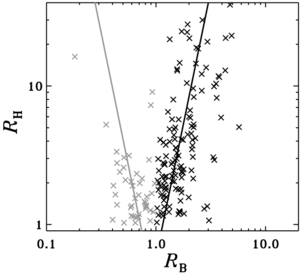 Fig. 2: Scatter plot of HXR flux ratio vs. magnetic mirror ratio, where the dark color is for RB > 1 and the gray color is for RB < 1, with the corresponding least-squares fits.

Causes of asymmetry reversal: Two events, the 2004 November 4 M5.4 flare and the 2004 November 6 M3.6 flare, are shown in Figure 3 to illustrate two different scenarios causing sign changes in AH during flaring periods. By comparing the estimated asymmetry quantities with the HXR lightcurves, the asymmetry reversal in the late period of M5.4 flare is mainly attributed to the difference of coronal energy release or acceleration processes in different periods, while it is associated with the location changes of HXR footpoints moving to different magnetic field regions in the M3.6 flare. 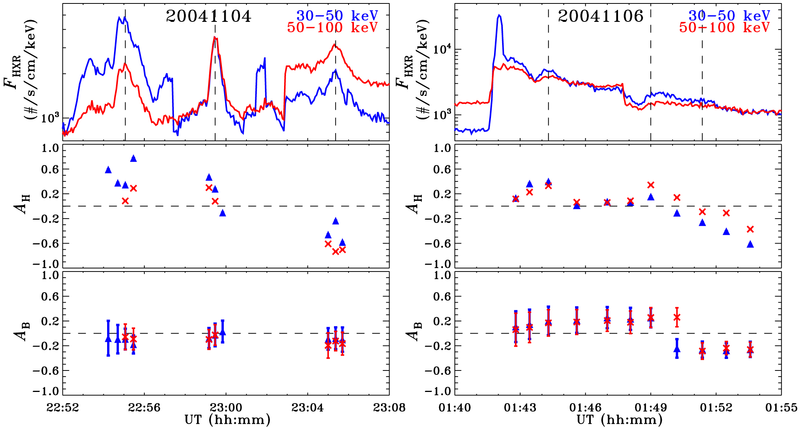 Our statistical results show that 75% of the strong HXR footpoints coincide with the weaker magnetic field strengths, which is qualitatively consistent with the prediction of an asymmetric magnetic mirror scenario. Even so, it must be emphasized that the properties of HXR footpoint asymmetry are also affected by other transport effects and coronal acceleration process besides the asymmetric magnetic mirror. It is difficult to attribute the footpoint asymmetry purely to a single effect for solar flares. It would be worthwhile to investigate further the causes of footpoint asymmetry reversal during different flaring periods or between different energy ranges.

[1] "Energy dependence of electron trapping in a solar flare"