This Nugget returns to the "gee whiz" style in which a very recent and interesting phenomenon gets some quick scrutiny. In this case the phenomenon is a sympathetic flare, ie one induced by another event. The occurrence of such flares has long been known, but the mechanisms remain somewhat murky. The general opinion is that an active region that is about to flare finds itself in a state of marginal stability, so that an energetically minor trigger of some sort can just push it over the edge. The problem is in the physical nature of the trigger, if that is indeed the right way to describe the interaction. Very often powerful flares simply are ignored elsewhere on the Sun, as discussed in an early Yohkoh Nugget.

Armed with the alert message, one can rather quickly understand the basic phenomenon by use of the many Web-based resources now available; these lead to wonderful data from a wide variety of spacecraft, most of which eagerly put their images on line as quickly as possible. Three of them, in Figure 1, show some of the trail of evidence for our sympathetic event.

Figure 1: Three images from the on-line archive for the sympathetic flares of 11 July 2011. Left, the flare locator image from Sam Freeland's events service. MIddle, the RHESSI locator image, which identifies the event in 1247 as the second event of the pair. Right, the hard X-ray time series from the Fermi Gamma-Ray Burst Monitor. This shows the sympathetic action just beginning, with the two participating active regions labeled 1247 and 1249. These latter two items are part of the RHESSI Browser material.

This survey led to a little discovery: the very rapid spike in the blue line (25-50 keV) of the hard X-ray data in the right-hand panel of Figure 1. By a leap of imagination, this could well be the time of the impulse that led to the second flare. Such a spike often suggests a mechanism outside the standard paradigm of the Neupert effect, suggesting something unusual here. Different mechanisms are feasible. One could have an Alfvenic disturbance propagating above the photosphere, moving rapidly through the corona. There are several possibilities here. Or, one could have a sunquake propagating beneath the photosphere, in which case the disturbance would be more like a simple sound wave.

One can study various movies of the flare development, for example by opening iSolSearch and querying by time and phenomenon ("flare" here). This rapidly leads to movies in all of the AIA wavelengths, reduced by the "cutout" service to manageable file sizes. These movies show the developments very well, but don't obviously reveal the nature of the linking mechanism that would allow the first flare to trigger the second one. Figure 2 is a beautiful snapshot, in the standard SDO three-color composite, take at the time of the hard X-ray spike event. 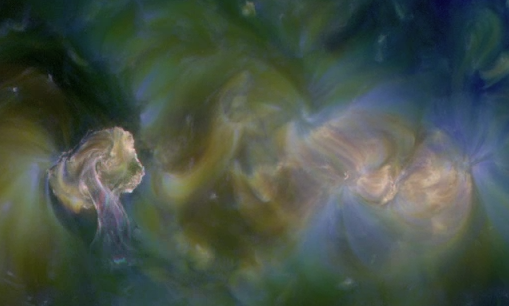 Figure 2: A three-color composite EUV image covering both active regions, just at the time (10:50:08 UT) of the hard X-ray spike seen by Fermi (note that RHESSI was in Earth shadow at the time of the initiating event, unfortunately). This coincided with the flare in Region 1249. A huge jet development can be seen pushing almost directly S; the darkness around the region is the result of coronal dimming that has already begun. The movies do not show any obvious evidence of a disturbance propagating between the two regions, but this jet is a powerful injection into the corona above them.

The image in Figure 2 shows, on the left, a massive jet shooting downwards (ie, up into the corona). On the right is the active region in which, ten minutes later, the second flare will happen. Nothing obvious connects the two regions. If a disturbance went directly from one to the other, its speed would be on the order of 400 km/s. This seems (a) too slow to be a direct Alfven wave, but (b) too fast to be a subphotospheric acoustic wave. So, how do we explain this sympathetic flare relationship?

The likeliest explanation might be one that occurred to the late plasma astrophysicist Yutaka Uchida in the 1960s. Namely, a global coronal hydromagnetic wave - possibly powered by the jet or CME activity responsible for the dimming - is refracting through the corona. Some of the Poynting flux associated with this powerful wave, moving on a curved trajectory as it is ducted through the large-scale field, finds its way to the neighboring active region and thus ignites the flare there. Obviously this scenario is extremely speculative and not at all established by the images shown here. But, this event just took place two days ago, at the time of writing. We eagerly anticipate some detailed analysis of the data mentioned here, and much other that has not been mentioned.

Special thanks to Ryan Milligan, who sent the alert message, and to Richard Schwartz, for help with Fermi data.