Initiation of a type II radio burst without a CME

Metric type II solar radio bursts are the radio signatures of coronal shock waves, which are often observed during a solar eruption. There has been a long-lasting debate about whether low coronal shocks (and associated type II radio bursts) are excited by a CME or flare energy release, specifically by a pulse of thermal pressure. In most of the solar eruptions, the flare's rising phase (in soft X-rays) and the CME acceleration phase in the low corona occur simultaneously. Therefore, it is difficult to distinguish the exact driver of the shock wave (whether flare or CME) during an eruptive flare.

In this Nugget, we present a well-observed type II burst associated with a flare-generated shock wave on 16 April 2014 (SOL2014-04-16 (M1.0)) [1]. This event did not show any evidence of an associated CME. However, a mini-filament was seen to erupt in the opposite direction of the fast EUV wave. Such events are of great interest, because they challenge a common assumption that CMEs are always required to generate coronal shocks.

The type II burst was seen in the dynamic radio spectra from e-Callisto (the Roswell station, 220-450 MHz) and RSTN's Sagamore Hill station (25-180 MHz) from about 19:57:40 UT to 20:10 UT (Figure 1(a,b)). The fundamental (F) band, interpreted as emission at the local plasma frequency, shows splitting, which is typically seen in other CME-associated type IIs and corresponds to a compression ratio of 1.6 around 120 MHz and 1.4 around 40 MHz. The average speed (from the linear fit) of the type II emission source is ~670 and ~810 km/s for the Newkirk coronal density model and twice it, respectively.

For the first time, we see a positive slowly drifting burst (~220 MHz) simultaneously with the onset of a type II radio burst and closely associated with the site of magnetic reconnection. The emission source apparently moves downward with a speed of ~100-130 km/s. This source may be interpreted as a termination shock, which can accelerate energetic particles downward.

The onset of the type II is closely associated with the flare impulsive phase (Figure 1(c)). At the same time, a wave was observed in the AIA 335 Å (Figure 1(d)) with a speed of ~800 km/s and later in the AIA 193 Å (Figure 1(e)) and 171 Å channels (1490 km/s), propagating through the active-region loops (eastward). The EUV disturbance triggers transverse oscillation in several loops and seems to be reflected back after reaching the opposite footpoint of the arcade loops. Although we observe the loop system from above, it is difficult to say whether it is due to reflection of the disturbance or transverse oscillations of arcade loops. It is very likely that the fast wave propagates not only along the arcade loops but also across/perpendicular to the loop system [2]. The wave speed jumped after passing through the loops possibly due to change in local Alfvén speed. A similar jump was seen in the type II radio burst. 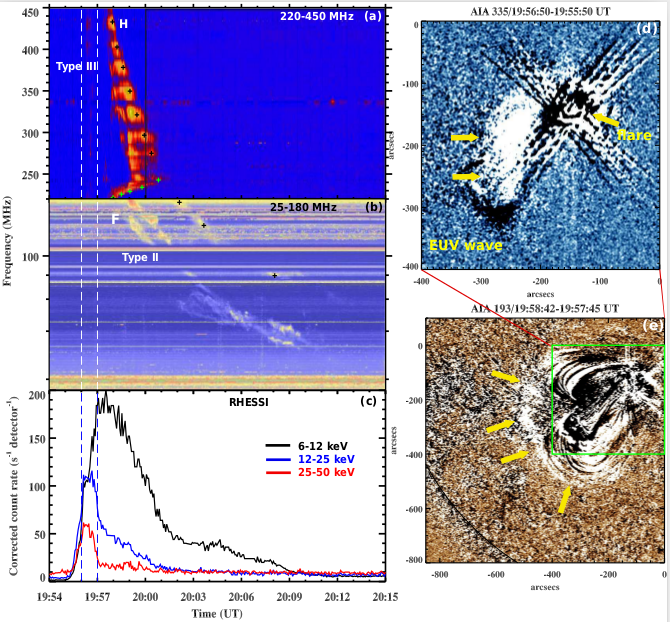 The wave did not expand symmetrically in all directions, instead propagating mainly toward the east limb through the arcade loops. The wave chose the path of high density loops, most likely because of lower Alfvén speed. The fast EUV wave triggered the kink oscillation of the arcade loops during its passage through them (Figure 2 (a)). A decaying sine-function fit to the oscillation profile provide the period and decay time, 210 s and 506 s, respectively (Figure 2(b)). The estimated phase speed was ~1140 km/s. The Alfvén speed was thus ~840 km/s, almost consistent with the observed wave speed during its passage through the arcade loops.

We have reported direct observation of a fast EUV (shock) wave propagating through solar coronal arcade loops, which was associated with CME-less type II radio burst. The wave was observed in the AIA 335, 193, and 171 channels, with a speed of 800-1490 km/s. The wave was most likely triggered by a magnetic reconnection process. A small filament eruption (~340 km/s) was observed shortly after the formation of a quasi-circular ribbon, which moved in the opposite direction of the shock wave and failed to erupt. We did not see any EUV wavefront ahead of filament and speed of the filament was 3-4 times less than the EUV wave speed. The EUV wave was highly directional [3] and excited kink oscillations of the arcade loops during its passage through them.

Retrieved from "https://sprg.ssl.berkeley.edu/~tohban/wiki/index.php/Initiation_of_a_type_II_radio_burst_without_a_CME"
Category: Nugget
Facts about Initiation of a type II radio burst without a CMERDF feed