Solar flares exhibit strong non-thermal emissions, such as gyrosynchrotron radiation and especially RHESSI's specialty, hard X-rays (photon energies above 10 keV or so, well above normal coronal soft X-ray emission). The strength of these hard X-rays shows that high-energy electron acceleration plays more than a diagnostic role in the flare process, and must reflect a major component of the flare energy. Similarly the even more difficult gamma-radiation tells us about ion acceleration in solar flares.

We describe here KW-Sun, a large database of solar flare hard X-ray and soft γ-ray emission accumulated by the Konus/WIND experiment (Ref. [1]). Konus/WIND is a joint Russian-US experiment launched on November 1, 1994 for γ-ray burst and solar flare studies. The instrument has operated in interplanetary space since July of 2004, near the Lagrangian point L1, so it sees the Sun 24 hours a day, and thanks to being far from the Earth's magnetosphere it has an exceptionally stable background.

The wide energy range (at present time from about 20 keV to 15 MeV) allows us to study nonthermal emission from accelerated particles. The instrument has high temporal resolution in a triggered mode that allows us to observe the fine temporal structures of solar flares, for example that described in a recent Nugget and Ref. [2]. Konus/WIND can observe hours-long gradual flares during their entire duration in its waiting mode; an example is the remarkable behind-the-limb flare SOL2014-09-01.

During more than 22 years of observations Konus/WIND has detected more than 1000 solar flares in trigger mode (Figure 1), which constitute the database. The KW-Sun database can be accessed via "http://www.ioffe.ru/LEA/kwsun/" (at the time of writing only the data for years 2012-2016 are available, the remaining data will be added shortly).

Figure 1. Annual distribution of solar flares recorded by Konus/WIND in trigger mode over the experiment duration, segregated by GOES class.

Konus/WIND consists of two 13 cm x 7.5 cm NaI(Tl) detectors S1 and S2, which observe the southern and the northern ecliptic hemispheres, respectively [1]. The experiment works in two modes: waiting mode and triggered mode. In the waiting mode light curves are available in three wide energy channels G1 (now ~20 - 80 keV), G2 (now ~80 - 300 keV), and G3 (now ~300 - 1200 keV), with accumulation time 2.944 s. In the triggered mode Konus/WIND measures light curves in the same three channels with time resolutions varying from 2 to 256 ms and with a total duration of ~240 s. Simultaneously, the instrument accumulates 64 multichannel energy spectra in two partially overlapping ranges: at present ~20 - 1200 keV and ~400 keV - 15 MeV. Switching to the triggered mode occurs at a statistically significant excess above background count rate in the G2 energy channel. When accumulation of the triggered mode light curves and energy spectra has been completed, both triggered and waiting mode measurements are interrupted by a gap of ~1 hour because of the data readout.

The Solar Flare Observations and Database

See Ref. [3] for a detailed description of the Konus/WIND solar data, with comments about their advantages and limitations.

The Konus/WIND Sun Database provides energy spectra and response matrices in FITS format as well as light curves in ASCII and IDL SAV formats for solar flares detected in the triggered mode. The IDL routine for reading and processing Konus/WIND FITS spectrum files has been added to the OSPEX package and is now available from SolarSoft. See the Database website for instructions.

As an example of the Konus/WIND triggered-mode data, we show the light curve for the flare SOL2001-12-19T13:18 in Figure 2. This M-class flare has an increasing spectral component above 100 GHz and falls in the "subTHz flares" category [4]. 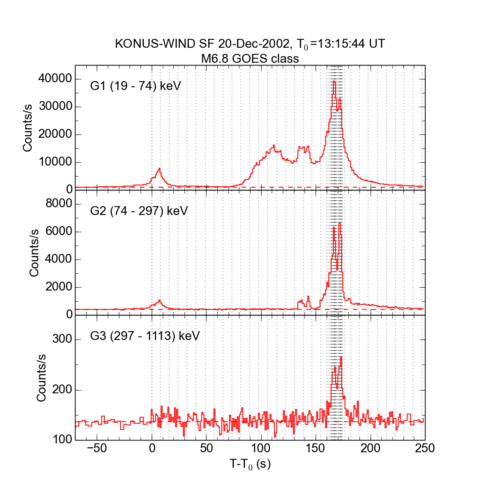 Figure 2. Konus/WIND light curve for SOL2001-12-19T13:18. Here T0 refers to the Konus/WIND trigger time, and the vertical dotted lines correspond to accumulation times for full spectra. The light curve has been rebinned to have a temporal resolution 1 s.

See the event list for triggered-mode events with GOES classes.

As an example of Konus/WIND spectral data, an energy spectrum for the hard M-class flare SOL2010-06-12T00:55 is presented in Figure 2. This spectrum has noticable contributions from nuclear deexcitation γ-ray emission, the e+-e- annihilation line at 511 keV, and the neutron-capture line at 2.2 MeV. 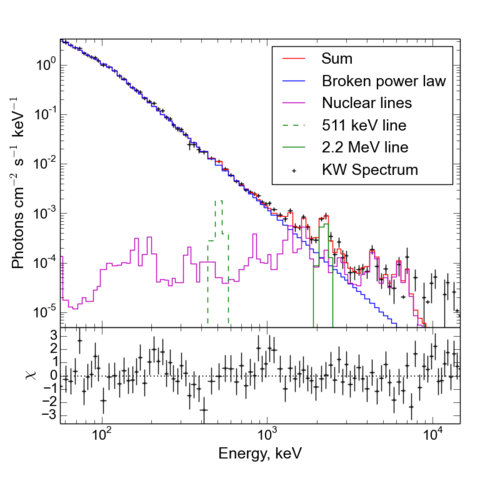 The Konus/WIND-Sun Database offers a uniform dataset of solar X-ray and γ-ray observations performed over two solar cycles, in a broad energy range (20 keV - 15 MeV). This is a treasure-trove for probing electron and ion acceleration with high temporal resolution.

[2] "A Cold Flare with Delayed Heating"