Solar flares produce high-energy, non-thermal electrons. To understand the origin of non-thermal electrons, it is important to know how many electrons are accelerated to non-thermal energies. We do this by measuring the X-ray photons emitted by the electrons during flares and generating energy spectra - histograms that show the energy distribution of the X-ray photons, which reflects the energy distribution of the electrons themselves. In general, a non-thermal tail is relatively flat in the energy spectrum and appears in a form of power-law. It extends from an intense and steep thermal component (well-represented by the Maxwell-Boltzmann distribution or Maxwellian). However, a power-law representation of the non-thermal tail requires a lower-energy cutoff in the spectrum, to avoid an infinity, and the estimates of the non-thermal fractions of electron number/energy densities are sensitive to this cutoff energy because of the relatively small cross-section for hard X-ray bremsstrahlung at low energies.

With this in mind, we have revisited an ‘above-the-loop’ coronal X-ray source observed by RHESSI on 2007 December 31 and showed that the so-called kappa distribution can also be used to represent the energy spectrum. Because the kappa distribution has a Maxwellian-like core connected smoothly to the high-energy power-law tail, the emission measure and temperature of the instantaneous electrons can be derived without assuming a cutoff energy. Furthermore, the non-thermal fractions of electron number/energy densities can be uniquely estimated because they are functions of the power-law index only.

As illustrated in Figure 1 left, the kappa distribution is a single function with properties of both a Maxwellian (in the lower energy range) and a power-law (in the higher energy range). The difference between the kappa distribution and the adjusted Maxwellian (the shaded region in Figure 1) can be regarded as non-thermal. The fraction of the non-thermal particles (shaded region) then is, in fact, a function of the power-law index (or "kappa") as shown in Figure 1 right). Therefore, we only need to find the power-index from spectral analysis in order to estimate what fraction of electrons in a hard X-ray source was non-thermal. We do not need to assume a low-energy cutoff or a source volume, which are often defined rather arbitrarily. 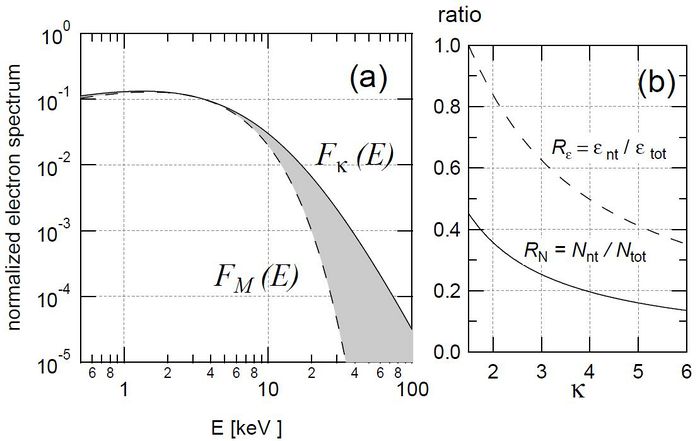 While Kašparová and Karlický had already shown that the kappa distribution can be used for hard X-ray coronal sources, we further analyzed an above-the-loop event SOL2007-12-31, as reported in reference [3]. The RHESSI observations of this flare remind us of the famous "Masuda flare". This was a good event to study because it showed unusually intense emission from the coronal source while its footpoints were both behind the solar limb (we want to avoid footpoints because they are usually bright and can confuse RHESSI imaging of a fainter coronal source; see the Nugget "How Does RHESSI Make Images?").

Figure 2 shows the spatially integrated photon spectrum from the flux peak time with three different spectral models. The thermal component from the adjacent source is shown in red. The question is which model can better represent the high-energy tail of the spectrum (colored blue). The most simple model is a power-law with no thermal electrons (Model A). We chose the lower-energy cutoff so as to be consistent with constraints from imaging spectroscopy (The constraints are indicated by the arrows in Figure 2). Then, with this model, we estimated that non-thermal electrons carried 90% of the total electron energy in the coronal source. This is a very large number. When we explicitly added a thermal core in the coronal source (Model B), we estimated that non-thermal electrons carried only 12% of the total electron energy in the source. This is a small number. Here, a range of values for the lower-energy cutoff fit the data equally well and the highest value that still fits the data has been used in Model B.

Now, when we used the kappa distribution (Model C), the observed spatially-integrated spectrum was fitted with kappa (i.e. power-law index) ~3.8. Then, we estimated from Figure 1 (right), without assuming the lower-energy cutoff, that non-thermal electrons carried 52 (+3/-2)% of the total electron energy in the source. This is a reasonably large number.

Figure 2: Comparison of the observed spatially integrated photon spectrum (histograms) with modeled distributions (solid curves) as well as the imaging spectroscopy result (light-red and light-blue squares for the northern and southern sources, respectively). Three different sets of models were used to fit the observed spectrum.

The kappa distribution has the advantages of not having lower-energy cutoff. The non-thermal fractions of number/energy densities can be uniquely estimated from the power-law index (i.e. kappa parameter). We showed that the kappa distribution model could be used to fit the photon spectrum of the RHESSI event of 31 December 2007. Reference [4] has further details. It is noted that the chi-square values in Figure 2 varied in each model, but the average chi-square over the entire flare interval was sufficiently small (~0.9) in Models B and C. It would be important to examine a larger number of events in order to verify the generality of the kappa distribution model.

[3] Measurements of the Coronal Acceleration Region of a Solar Flare