The magnetic field of the Sun originates in the solar interior, driven by a dynamo mechanism. It then emerges through the photosphere, ultimately permeating the entire heliosphere. The evolution of this field at the Sun's surface is manifested in large-scale features such as filaments, active regions and sunspots, polarity boundaries, and coronal holes. Surface diffusion and transport produces an evolving pattern of positive and negative magnetic polarity regions that encompass the global magnetic field. The Sun exhibits characteristic migration patterns of all of these these features. One is the equatorward movement of the latitude zone of sunspots, a fundamental feature of the 11-year activity cycle that resembles the wings of a butterfly (Figure 2), as first described by Maunder. Another is the poleward movement of high-latitude filaments and their related unipolar magnetic cells. It is clear that observing the evolution of such surface features over long, solar cycle-time scales is important for understanding the internal fluid dynamics of the Sun. The newly-established McIntosh Archive of solar synoptic maps now permits tracking these features over four consecutive solar cycles. 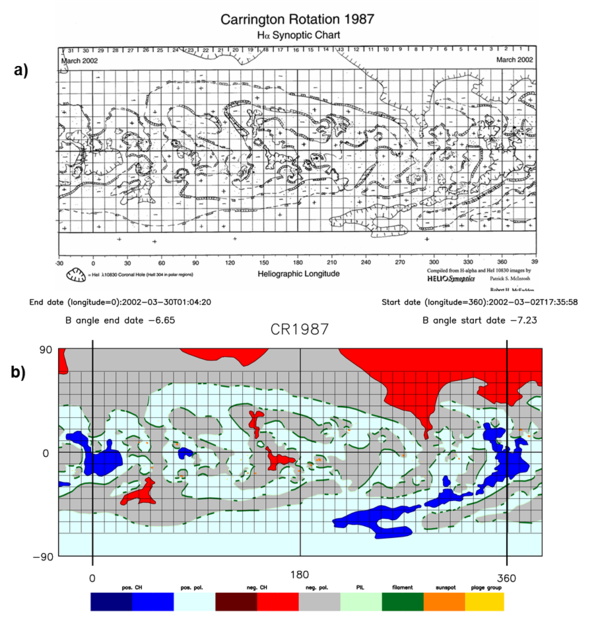 This Archive consists of a set of hand-drawn solar Carrington maps created by Patrick McIntosh, who passed away in 2016, from 1964 to 2009 (Figure 1A). Pat used mainly H, He-I 10830 Â and photospheric magnetic measurements from both ground-based and NASA satellite observations. With these he traced the phenomena of the solar magnetic field: polarity inversion lines, filaments, sunspots and plage and, later, coronal holes, over a 45-year period. This yielded a unique record of synoptic maps of features associated with the large-scale solar magnetic field. With NSF support we have preserved and are digitizing this archive in an IDL-based, searchable format (Figure 1B). We have created a website (https://www2.hao.ucar.edu/mcintosh-archive/four-cycles-solar-synoptic-maps), and an archival repository at NOAAs National Centers for Environmental Information (NCEI). This work is reviewed in the References, most recently in Ref [1].

Figure 2 combines the sunspot, filament and coronal hole locations for the entire McIntosh Archive ("McA") data processed to date, showing at a glance how the patterns repeat in each cycle. In addition, the plot illustrates how the positive and negative-polarity open magnetic fields surround the closed-field filaments and sunspots globally. The open field is that part connected into the solar wind, and the closed field is that part forming loop-like connections between two points in the photosphere.

Despite the data gaps, this demonstrates well how the dual cells of opposite-polarity in the higher latitudes of each hemisphere track each other through each cycle, and how consistent the offset is between the higher-latitude open and closed regions and the lower-latitude closed regions (sunspots and plage). Of interest is the evolution of the polar magnetic regions of the Sun and how the "rush to the poles" and other patterns occur during the period when the polar fields reverse near each cycle maximum. Figure 2 shows that we have data coverage during these epochs for three consecutive solar cycles: in the North in Cycle 21 around CR 1700, Cycle 22 CR 1830, and Cycle 23 CR 1970. In the South the reversals lag those in the north, as has been the case in recent solar cycles. We are working to fill in the data for the incomplete or missing CRs. The Carrington rotation number (CR) counts solar rotations since an epoch defined by Carrington, at a rate he also devised. This framework is necessary because of the differential rotation.

Figure 2: "Butterfly" plot of all of the McA data processed to date starting with CR 1513 in October 1966 and ending with CR 2086 in July 2009. The Year scale is at the top and the Carrington Rotation scale at the bottom. This plots for each CR all sunspots (orange), the poleward-most filament boundaries (green), and the poleward-most coronal hole boundaries (red and blue). Closed (open) circles indicate the most northward (southward) extensions of hole boundaries for each CR, and red and blue indicate magnetic polarity.

Finally, Figure 3 is a sequence of equatorial slices stacked along a curving, snake-like axis advancing in time using the Archive data for all of Cycle 23 (CRs 1910-2084). Active longitudes are evident in the quiet sun, sunspots, and coronal holes. A near 180° longitudinal asymmetry is particularly evident just after solar maximum, consistent with studies spanning 100 years of sunspot active longitudes. 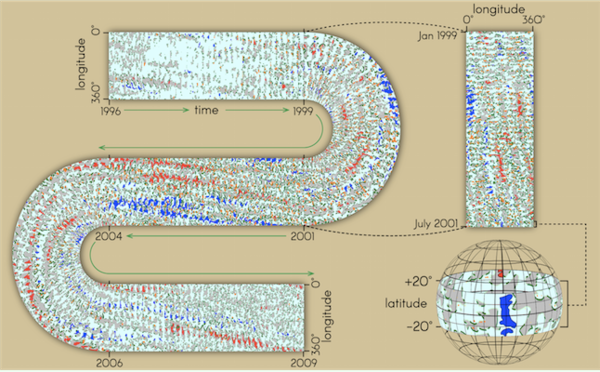 Figure 3: A sequence of equatorial slices (20° to +20° heliolatitude) is stacked along a curving axis, like a snake, advancing in time through CRs 1910-2084 (Cycle 23). The width of the "snake" is the 360° heliolongitude range for for each CR. The colors follow the key as in Figure 1B. The panels on the right show how an equatorial latitude strip from one CR is patched into a stackplot which in turn becomes a curvilinear part of the entire snake that traverses all of Cycle 23

[1] "Global Solar Magnetic Field Evolution Over 4 Solar Cycles: Use of the McIntosh Archive"