The behavior of the magnetised plasma in the solar atmosphere defines almost all of the problems of interest regarding solar activity. In particular magnetic reconnection is a topic or great interest in the all-pervasive field of astro-plasma physics, and has been most readily recognised via its role in solar eruptions and energetic events in the geomagnetic tail of the earth (see Figure 1).

Figure 1: Showing a schematic of reconnection in the geomagnetic tail. Blue arrows indicate the motion of field lines. The direction of the magnetic out-of-plane field, as discovered in Ref. 1, is shown in red.

While magnetic field lines are normally 'frozen' into plasmas and thus prevented from touching or crossing another, in a reconnection event, two field lines touch and form two new field lines. In effect, there is change in the topology of the field lines. As a result, energy stored in the magnetic field can be released rapidly into other forms, possibly including non-thermal particle acceleration.

In the collisionless plasma regime, i.e. when particles are acted on only by the overall electromagnetic field, rather than that of individual charges, magnetic reconnection has an observational signature describable as a quadrupolar magnetic field. This magnetic field structure forms over the point where the separatrices of the reconnecting field lines cross, i.e. the X-point. If we consider magnetic field-lines in a plane, moving horizontally towards and vertically away from the X-point, the quadrupolar magnetic field manifests it-self as four regions of magnetic field intensity, pointing in and out of the plane (see Figure 2). This out-of-plane field has been observed in several simulational studies using both tearing-mode scenarios and X-point collapse (see Ref. 2 and Ref. 3 respectively) and it has been directly observed in situ from spacecraft in the geomagnetic tail (see Ref. 1) as well as in laboratory experiments (see Ref. 4). 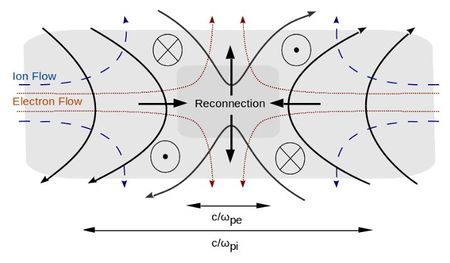 Figure 2: After Ref. 5, Figure 3.1, showing a schematic of collisionless reconnection.

The regions of out-of-plane field intensity are generated as ions and electrons decouple from the reconnecting field lines. Since ions are heavier, they decouple sooner, while electrons remain "frozen in", leading to current loops as shown in Figure 2. More precisely, as explained in Ref. 6, after ions decouple and cease to move with the field lines, coupled electrons are pulled towards and away from the X-point, along the field-lines, to conserve charge neutrality as the spacing of field lines near the X-point contracts and expands during reconnection. Thus, the quadrupolar field is mostly generated by electron motion. 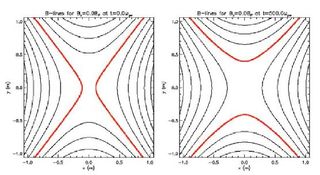 Figure 3: From Ref. 7, showing from left to right the initial and final setup of the X-point collapse simulation. The red line indicates the amount of field line movement that occurred.

In Ref. 7 the discovery of a related effect, leading to an additional four regions of opposite magnetic polarity in the out-of-plane magnetic field, is presented. Here, the resulting overall magnetic field has an octupolar structure, which could be of similar observational significance and a potential avenue for further experimental investigation. We shall refer to the central quadrupolar magnetic field structure as quadrupolar components and to the additional regions of magnetic polarity as octupolar components.

The reconnection setup used in this simulational study is that of X-point collapse, first introduced by Jim Dungey in 1953, as one of the earliest analysis of magnetic reconnection, pre-dating the tearing-mode. As shown in Figure 3, this setup is made up of hyperbolic field lines, centred on the X-point. When symmetric, this setup is stable. However, compressing the field in the X-direction leads to an out-of-plane current and thus a Lorentz force, dragging field lines horizontally towards the X-point, increasing the initial asymmetry, and the field collapses (for further detail see Ref. 8, chapter 2.1). While this setup is distinctly different from the well-studied tearing-mode instability, after a Harris type current sheet is disrupted by the tearing instability and magnetic islands and X-points start to form, there are few distinguishable differences between the two approaches.

As in previous studies of reconnection, a distinct out-of-plane quadrupolar magnetic field was observed early in the simulation. However, after reaching peak reconnection rate, four further regions of magnetic polarity emerged, resulting in an octupolar magnetic field. This was tested with both open and closed boundary conditions imposed on fields and particles (see Figure 4) as well as for increasing system sizes (4 to 16 ion-inertial lengths) and the effect was persistent. The simulation was run with ion masses of 100 times the electron mass. Further testing however indicated that increasing the ion mass does not diminish the strength of the octupolar components. Therefore, the effect is likely to be present in simulations using realistic particle masses and thus in real physical scenarios. 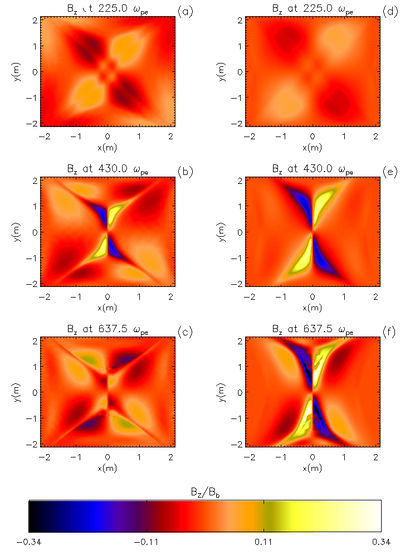 Figure 5: From ref. 7, showing the out-of-plane magnetic field in the lower left quarter of the domain, obtained by breaking down Ampere's law into individual current components and integrating over the simulation domain. Panel b) and c) show electron and ion contributions respectively while panel a) represents their combined contribution, effectively representing the lower left quarter of panel b) in Fig. 4.

The cause of the additional areas of magnetic polarity were investigated by investigating individual contributions to the out-of-plane magnetic field from ion and electron currents separately (see Figure 5). As expected, it was shown that the inner quadrupolar field was the result of electron motion. However, as shown in panel c) of Figure 5, the octupolar components are the result of ion currents. This can be explained by the decoupled motion of the ions while electrons are frozen into the magnetic field except close to the X-point. The resulting charge imbalance leads to electrons moving along the field lines to restore charge neutrality. This explains the lower electron contribution to the out-of-plane field in panel b) of Figure 5, in the region of -1m < x < -0.3m and -2.1m < y <- 1.5m. This separates the octupolar components from the edge of the domain.

As discussed, the octupolar magnetic field of X-point collapse occurred for various system sizes and boundary conditions. It was also shown to be likely to emerge in simulations using realistic particle masses and thus in real physical scenarios. Since this effect is of similar observational significance as the quadrupolar magnetic field of reconnection, it would be of interest to investigate if this effect can also be observed in astrophysical or experimental reconnection events. Since previous simulations, based on tearing-mode reconnection, did not discover the octupolar field described here, it may be the case that observing an octupolar magnetic field in an astrophysical reconnection event would identify X-point collapse as the more appropriate model.

[5] "Reconnection of magnetic fields: magnetohydrodynamics and collisionless theory and observations"