A common characteristic of solar and stellar flaring emission is the presence of pulsating and oscillatory signatures known as quasi-periodic pulsations (QPPs). QPPs are typically identified during the impulsive phase of solar flares in hard X-ray and radio observations from instruments such as RHESSI and NoRH (see [1] and RHESSI Nuggets #148 and #102). Recent evidence has however demonstrated that flaring QPPs are a truly multi-wavelength phenomena [2], with oscillatory signatures detected across the entire electromagnetic spectrum. Of particular interest is the recognition of fine-structure small-amplitude QPPs in the soft X-ray emissions, such as those observed in the time-derivative or detrended GOES XRS lightcurves (for more on this see RHESSI Nugget #262). There is growing evidence that QPPs of this type are a common characteristic of solar flares, particularly during the impulsive phase [3]. In some cases, their presence can extend late into the decay phase. These fine-structure QPPs observed in the soft X-ray emission must be linked to some aspects of the flaring region, and their relationship to other flaring parameters requires investigation.

On September 10, 2017, just as the prominent active region 12673 was rotating off the solar disk, the second largest flare of [solar cycle 24] erupted - an X8.2 GOES class event - followed by one of the fastest CMEs reported to date. The flare was extremely long in duration; it began at 15:35 UT, reached a peak in the GOES 1-8 A channel at 16:06 UT, and then did not return to pre-flare flux levels until the following day. The position of the flare on the western limb of the Sun, together with the magnetic configuration of the event itself, provided a unique perspective to the complete solar eruptive processes, demonstrating one of the best examples of the "CSHKP" model configuration. The evolution of the flare as observed in the 131 A channel of the AIA instrument on SDO is shown in Figure 1 (a-d). The pre-eruptive plasmoid - an apparently detached bubble - is clearly seen in (a) followed by the flare and cusp-shaped post-flaring loops (b-d).

Figure 1: The evolution of the GOES X8.2 solar flare as observed in EUV at 131 A from AIA. The erupting plasmoid can clearly be observed in (a) followed by the impulsive flaring release (b,c) and the post-flare cusp-shaped loops (d). Numerous saturation artifacts appear in the images as well.

Focusing on fine-structure variability detected in the soft X-ray emission, we have studied both channels of GOES (1-8 A, 0.5-4 A), plus the less-frequently used EVE/ESP 0.1-70 A channel. These lightcurves are shown in Figure 2 (a). In comparison to non-thermal emissions in which QPPs can clearly be identified in the raw lightcurves, QPPs in the soft X-ray constitute a small fraction of the overall emission and hence a form of detrending is required to highlight potential examples. Notably, persistent QPPs can be identified in the detrended lightcurves during both the impulsive phase (marked within the vertical dashed lines) and late into the decay phase. 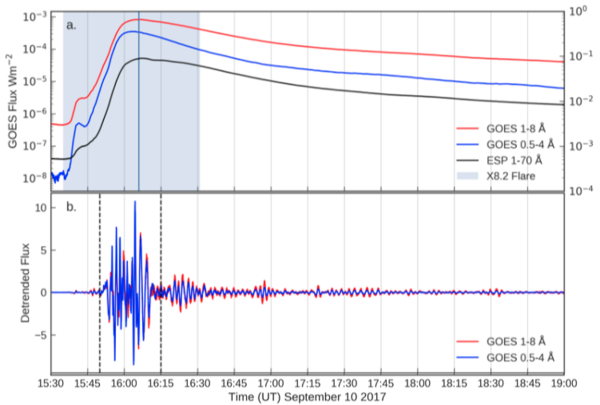 The QPPs continue for over 3 hours after the peak of the flare and that extend long into the decay phase; they also exhibit a clear signature of beating, with wave packets spaced out over fractions of an hour.

Analysis of the power spectra of the lightcurves confirms the presence of QPPs in this event. In this analysis we use the raw (undetrended) lightcurves to make sure that a bias is not introduced when detrending and to take into account the red-noise component of the flaring time series. This analysis is shown for the GOES 1-8 A channel in Figure 3.

Figure 3: Power spectral analysis [4] of both the impulsive (top panel) and decay phase (bottom panel) portions of the GOES 1-8 A lightcurves. For both the top and bottom panel, the lightcurve portion of interest is shown on the left panels, and the subsequent panels to the right show associated power spectrum and the different model fits to the power spectra. A QPP model (Model 1) is found to fix best for both the impulsive and decay phase with the peak frequency highlighted by the vertical dashed line.

Model fits to the power spectra contain a power-law (red noise) component, a constant term (white noise), and a spectral peak (the QPPs). During the impulsive phase, this model gives a peak at about 65 s. In the decay phase, the peak period increases to 150-160 s. It is notable that there is a much longer period in the decay phase as compared to the impulsive phase. This may be attributed to the increase in altitude of the emitting hot plasma with longer loops at later stages of the flare, or perhaps to a different underpinning mechanism.

This flare was well observed by RHESSI, and the limb location allows the soft X-ray sources to be imaged and their altitudes (and hence loop-lengths) estimated. A sequence of RHESSI images in the 6-12 keV and 12-25 keV energy bands were made for the duration of the flaring event. The centroids of the sources were determined to track the altitude evolution, and the computed heights above the solar limb is plotted as a function of time in Figure 4. The soft X-ray source rises throughout the flare, evolving rapidly during the impulsive phase at 17 km/s then slowing down to 5 km/s just after the impulsive phase and then to 2 km/s late in the decay phase. It is interesting to note that the bursty, larger amplitude, QPP associated with the impulsive phase occur during a time when the soft X-ray source is rapidly rising. The decay phase pulsations, on the other hand, occur when this evolution slows down, and this perhaps may explain the more stable, lower amplitude nature of the pulsations observed during this time. 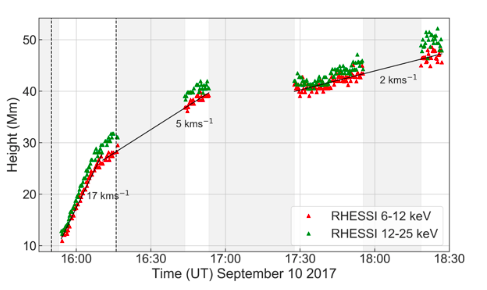 Figure 4: The centroids of the 6-12 keV (red) and 12-25 keV (green) RHESSI sources plotted as a function of projected height (in the plane of sky) above the solar limb. The vertical dashed black lines indicate the time of impulsive phase. The velocities are determined by linear fits, illustrated by the black lines.

To track the features in the EUV images we analyzed a running-difference movie in the following manner. Defining a slit along the presumed current sheet, Figure 5 plots the one-dimensional intensity distribution vs time. Moving features appear as tracks, which we identified by eye and fit with the black dashed lines. The plasmoid eruption can be clearly be seen at the beginning, followed by the impulsive phase which is dominated by saturation. No significant features of interest can be identified in this phase. Later in the event there is clear evidence of downward retracting loops/blobs that follow a sunward direction along the current sheet and impact the top of the newly formed cusp-shaped loops. Although it is challenging to quantify this appearance, it suggests that the QPPs coincide with the sunward-moving features. The timing hints that the QPPs start at the times of features identified at higher altitudes along the current sheet, before they reach the flare loop tops. Two examples of this are highlighted by the black arrows in Figure 5. 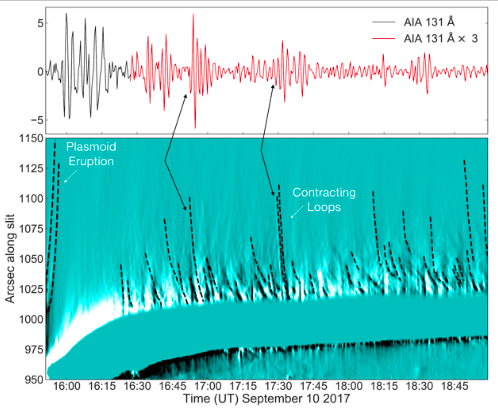 Figure 5: The top panel shows the AIA 131 A detrended lightcurve. The decay phase of the lightcurve (marked in red) is multiplied by a factor of 3 to make it easier to visually identify the QPP. The bottom panel displays the space-time plot produced from the slit placed along the presumed current sheet (extended linear feature in Figure 1) as observed in AIA 131 A running-difference images. The intensity tracks that mark motions along the slit are identified and are highlighted by the dark dashed lines. The plasmoid eruption at the beginning of the flare can be seen, together with the continued downward contracting loops. The arrows relate larger-amplitude QPP to features observed to propagate to the top of arcade.

The long duration X8.2 solar eruptive event provides one of the best examples of persistent soft X-ray QPPs detected throughout both phases of the flare, up to three hours after the GOES X-ray peak. Two regimes of QPP signatures are observed: bursty, relatively larger-amplitude QPPs during the impulsive phase with a period of 65s, followed by more stable lower amplitude QPPs in the extended decay phase that have a longer period of 150-160 s. This change to longer periods in the later stages of the flaring event may reflect a different dominant QPP driver in the different phases, or perhaps that the period is related to the evolution of the loop length scales which is observed to increase throughout the event (see Figure 4).

A key finding here is that the decay phase QPPs co-exist with the extended downward motions seen in the AIA 131 A images that move sunward along the current sheet and impact the top of the flare arcade. This coexistence suggests that the dynamical structure of the current sheet formation and associated eruption may play a role in the generation of the decay-phase QPP signatures.

[2] "Quasi-periodic pulsations in solar and stellar flares: an overview of recent results"