Quasi-periodic pulsations as indicators of oscillatory processes in solar flares

Solar flares exhibit repetitive variations of their emission fluxes in the form of quasi-periodic pulsations (QPP). QPPs are found in the emissions from tiny microflares to the most powerful (Ref. [1]). The signatures extend throughout the electromagnetic spectrum, from radio to gamma-rays, with typical periods from a fraction of a second to several tens of minutes. Because of their direct link with wave and oscillatory processes ongoing in the flaring site, analysis of QPPs offers a new promising seismological tool for diagnostics of flaring plasmas and processes operating there. Understanding the phenomenon of QPPs is necessary for advancing the model of a solar flare, thus increasing the reliability of the space weather prediction.

Their quasi-periodicity, the instrumental and background noise, the effect of the Earth's ionosphere, and the complex nature of solar phenomena in general sometimes make QPPs difficult to detect unequivocally. However, numerous independent studies applying various state-of-the-art robust detection techniques demonstrated at least a half of all analyzed solar flares have statistically significant QPPs, and so they are an intrinsic attribute of flare physics. In particular this suggests that standard models of flares do not describe the whole flare process well, and need generalization to accommodate the QPP phenomenon.

The wealth of observational manifestations of QPP events, and the variety of parameters and properties of detected QPP lead to necessity in their classification, e.g. in a similar manner to the classification of pulsations in the Earths magnetosphere (e.g., Ref. [2]). For example, we can consider rapidly decaying long-period harmonic oscillations and irregular (or non-stationary) pulsations as distinct but non-exclusive types of QPP. The irregular QPPs are often seen to have either symmetric triangular profile shapes (e.g. panels a and b in Figure 1), or modulated frequency and/or amplitude, or a form of wave trains (e.g. panels c-e in Figure 1). There is an ongoing effort in developing methods for QPP detection and analysis, revising standard techniques (e.g. Fourier and wavelet transforms) and adapting novel approaches (e.g., the method of empirical mode decomposition). The observed non-stationarity of the parameters of QPPs may be caused either by a superposition of several independent physical processes acting consequently or simultaneously in the flare region (multi-modal QPP) or by variations of the physical or geometrical parameters of the flare region, e.g. parameters of an magnetohydrodynamic (MHD) resonator (chirped QPP). 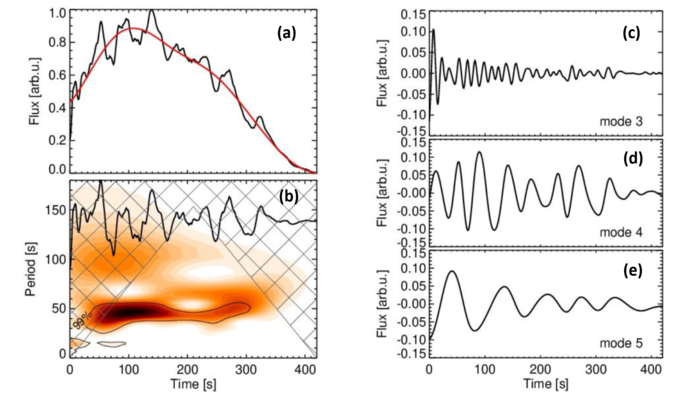 Figure 1: QPPs in the microwave emission of the flare SOL2013-05-14T01:11 observed by NoRH at 17 GHz. (a): a light curve of the flare (black) with triangular pulsations, and its low-frequency trend (red) obtained with the empirical mode decomposition (EMD) method; (b): the Morlet wavelet spectrum (shades of red) of a de-trended flare light curve (black); thin black contours show a significance level of 99%; (c), (d), (e) are three significant EMD modes with periods of 15 s, 45 s, and a decreasing period from about 90 s to 50 s, respectively. From Ref. [3].

Different observational properties of QPPs indicate different physical mechanisms for their generation. We stress that the knowledge of a 3D geometry of the flare region is crucial for understanding the nature of QPPs. Figure 2 summarizes the mechanisms proposed for QPPs in solar flares. QPPs can be caused by oscillatory variations of the physical parameters in flaring plasma structures, such as eigen MHD modes of a flare loop (mechanisms 1 to 4 in Figure 2) or of the macroscopic current sheet (8) and oscillations of the electric current in a flare loop (5); by periodically induced magnetic reconnection (6, 7); and by other mechanisms such as self-oscillatory regimes of reconnection (9), thermal overstability (10), oscillatory two-loop coalescence (11), and by vibrations of a magnetic fork (12). We list these below as well, and direct the reader to Ref. [4] for a full literature trail. 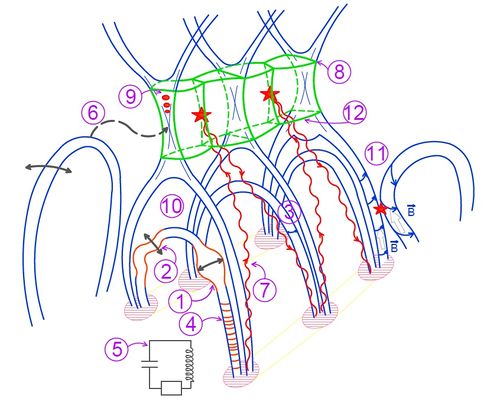 Figure 2: Many mechanisms of QPP generation captured in a single cartoon, not all of course operating simultaneously.

Mechanisms (1)-(4). The direct modulation of the flare emission by MHD oscillations depends on the the emission mechanism and how it modulates the physical parameters in the flare loop. For example, in the case of optically thin thermal emission, the temperature and plasma density are modulated by both fast magnetoacoustic (1, 2) and slow magnetoacoustic (4) modes. Furthermore, the observed column depth of the loop and accordingly the amount of plasma along the line of sight are modulated by both sausage (1) and kink (2) fast magnetoacoustic modes. In this case, periods and amplitudes of QPPs are determined by periods and amplitudes of MHD wave modes. In the presence of accelerated electrons in an oscillating loop the modulation of the electron plasma frequency and gyrofrequency, caused by a perturbation of the plasma density and magnetic field in an MHD wave, can modulate the incoherent nonthermal emission, e.g., through the gyrosynchrotron mechanism. The kink (2) and Alfvén (3) modes perturb the direction of the local magnetic field with respect to the line of sight, causing a modulation of the microwave emission intensity. Also, the loop is a magnetic trap for accelerated electrons. Sausage modes (1) modulate parameters of the magnetic trap (magnetic mirror ratio), and thus the flux of electrons precipitating into the chromosphere. This effect causes a periodic modulation of the nonthermal emission, generated by accelerated electrons, for example, in the microwave and HXR emission (the Zaitsev-Stepanov mechanism (Ref. [5]).

Mechanism (5). The finite electrical conductivity of a partially ionized chromosphere and photosphere short-circuits the electric currents directed along the magnetic field in the corona. Thus, the coronal loop may be considered as an equivalent electric resonant circuit causing periodic acceleration of charged particles and resulting in the occurrence of QPPs in the non-thermal emission.

Mechanisms (6,7). The oscillating plasma structures located at a distance from the reconnection site may modulate or cause the periodic reconnection. These external triggers could be kink-oscillating loops (6) or oblique slow magnetoacoustic waves reflecting at the loop footpoints and thus slowly progressing along the neutral line in a two-ribbon flare.

Mechanism (8). The quasi-periodic energy release propagating along the neutral line can be also explained by natural oscillations of the macroscopic current sheet located above the flare arcade (flapping oscillations). Associated with the current-sheet destabilization, they lead to increasing quasi-periodic movements perpendicular to the plane of the sheet. Through variations of the current sheet thickness, flapping oscillations may lead to a quasi-periodic modulation of the reconnection rate and the acceleration of charged particles.

Mechanism (9). The energy release rate in a flare can be periodically modulated by internal spontaneous self-oscillatory processes whose frequency is determined by properties of a self-oscillating system and is generally independent of properties of the external excitation. This group of mechanisms is referred to as "magnetic dripping" models. The theory of this phenomenon needs to be developed, although direct numerical experiments show the possibility of its existence.

Mechanism (10). Long-period (several tens of minutes) QPPs of thermal emission may be caused by the modulation of thermodynamic plasma parameters by thermal overstability induced by the misbalance between coronal heating ang cooling processes. Modulation of plasma parameters and possibly of the magnetic field by the overstability can produce QPPs.

Mechanism (11). The oscillating regime of coalescence of two twisted current-carrying flux tubes can lead to quasi-periodic bursts of emission intensity in solar flares. A current sheet forms in the region of interaction between two colliding magnetic loops with the magnetic field twisted in the same direction. On the one hand, if a constant inflow of magnetic flux to the reconnection region exists then the process of coalescence of two loops occurs in a repetitive manner. On the other hand, fast (short-period) transverse oscillations of the current sheet may occur in each elementary act of coalescence.

Mechanism (12). The "magnetic fork" model implies that the supersonic non-periodic magnetic flux flowing from the reconnection region interacts with the upper part of hot and dense post-flare loops. The collision of a rapid magnetic flux with a dense plasma results in the formation of shock waves forming V-shaped structures, which serve as effective resonators for plasma perturbations

The magnetized solar coronal plasma can support a huge variety of oscillatory structures. See Ref. [4] for a recent review.

[1] "Quasi-periodic Pulsations in a Solar Microflare"

[2] "Polarization and amplitude characteristic of Pc 3 pulsations in conjugate area around L=1.3-2.1"