On Sunday, February 5, 2017, the Reuven Ramaty High Energy Solar Spectroscopic Imager (RHESSI) completed its 15th year in orbit. RHESSI was designed to study energy release and particle acceleration in solar flares through imaging spectroscopy observations of the X-ray and gamma-ray emissions of these energetic events, the most powerful explosions in the solar system. The accelerated electrons and ions carry a predominant part of the released energy in a flare (e.g. Ref. [1]), and only RHESSI, at present, can provide imaging spectroscopy in this spectral domain (see the RHESSI home page).

During this interval of roughly 2/3 of a 22-year Hale Cycle, RHESSI has recorded over 114,000 X-ray events, 41 of them with gamma-ray emission above 300 keV. Figure 1 displays the catalog as a mean image of the hard X-ray Sun, quite striking in the sense that the body of the Sun actually is dark for these high-energy photons, and only the transient activity appears (and with a highly non-spherical distribution). Our previous Nugget also discussed this distribution from a different perspective. 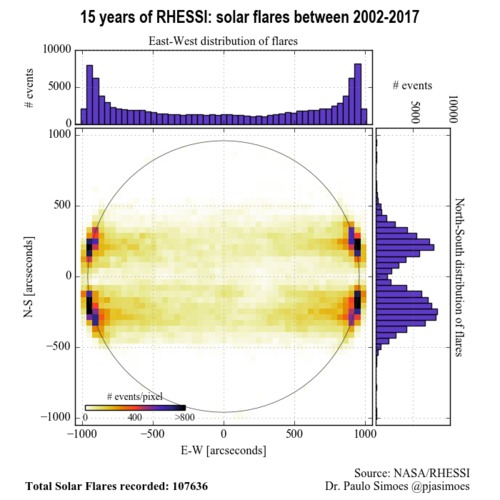 RHESSI's systems are ageing but still quite functional, and able to provide imaging spectroscopy routinely as before. The operational procedures have changed slightly in that we normally operate only two of the nine germanium detectors, in order to help the cryocooler's refrigerating performance. This still lets us make images and spectra such as those illustrated in Figure 2.

Figure 2: Observations of SOL2017-01-25 (B8.5), a very recent flare observed by RHESSI and EOVSA, the expanded Owens Valley Solar Array. This is a new major solar radio observatory, one of the wonderful new complementary data sources that has appeared during RHESSI's active life.

These very recent observations demonstrate RHESSI's continuing capability, now augmented by many new facilities such as EOVSA for microwaves and IRIS in the UV. To these and all of the other new and soon-to-appear facilities, RHESSI continues to supply the only hard X-ray imaging spectroscopy.

RHESSI's other pastimes include analysis of transient gamma-ray flashes (TGFs) from the Earth's atmosphere, produced by lightning. Also, data from its optical solar aspect system has been used for the most accurate measurements of solar oblateness and mean photospheric temperature distribution ever made, with continually incrementing precision as the mission continues (Ref. [2]). All of the data and the analysis software have been made immediately available to the scientific community resulting in over 1,000 refereed papers that utilize RHESSI observations, with more than 100 in the last year alone. They are now cited over 4,000 times per year.

The RHESSI spacecraft and instrument continue to operate well, as described above. The mission has no expendables and reentry is not predicted to occur until 2021 at the earliest. The slowly rising detector temperatures, resulting from the gradually decreasing cryocooler efficiency, is a matter of concern and has led us to operate only two of the nine detectors during periods of low solar activity. This minimizes the temperature increase and still permits effective imaging spectroscopy of flare hard X-rays. When major activity reappears, RHESSI can readily operate with full capability on short notice. We expect to be able to maintain RHESSI's unique hard X-ray imaging spectroscopy capability for the foreseeable future.