RHESSI makes images by modulation, not focusing (see our earlier Nugget for details). This imaging technique results in a loss of information, meaning that there is ambiguity regarding aspects of the image structure (technically speaking, the modulation system's visibilities do not form a complete set.) Particularly in complicated flares, it can be hard to know how much of the image is believable.

Accordingly, the RHESSI software includes packages for the detailed simulation of images, using prescribed source intensities, complete with noise. By using these simulations we can learn exactly how the imager should behave under realistic conditions. So, we can feed in a trial set of sources, then let the software crank away simulating how the RHESSI grids and detector behave, and at the end a data file pops out which is equivalent to what the spacecraft would send down to be worked on further. Then we take this file, pass it through the imaging software (e.g. CLEAN or pixons) as usual, and compare output and input to see the differences.

Even with RHESSI's high spatial resolution (2.3 arcseconds) we have certain knowledge from other kinds of observation that smaller scales do exist. In this Nugget we apply the RHESSI simulation software to "white-light" flare structures as observed by the TRACE satellite. TRACE makes images using a CCD camera with 0.5 arc s pixel size. Its "white light" channel has the response of the bare CCD, which is sensitivite from about 1200 Å out to about 8000 Å (though mostly responsive, relatively, in the ultraviolet). Previous Nuggets here and here have discussed observations of flares simultaneously in hard X-rays (HXR, meaning above about 20 keV) and white light (WL). The RHESSI and TRACE observations show that radiation from WL and HXR footpoints is pretty well correlated in space and in time.

For the simulations we could use any mocked-up spatial distribution of footpoint intensities, and early work with the simulation software used standard 'two-footpoints-and-a-looptop' configurations. However, we will use the observed white light images from a flare as an input 'model' and compare the output, once it has been passed through the simulation software and the imaging software, with what RHESSI sees. The purpose is two-fold - to see how well the standard techniques work in a complicated flare, and to probe further the relationships between WL and HXR sources.

In the figure below we show the TRACE WL image for the flare we are working on, which happened on October 4th 2002. This was created by averaging over three TRACE WL images at the flare peak, spanning an interval of 20 seconds. 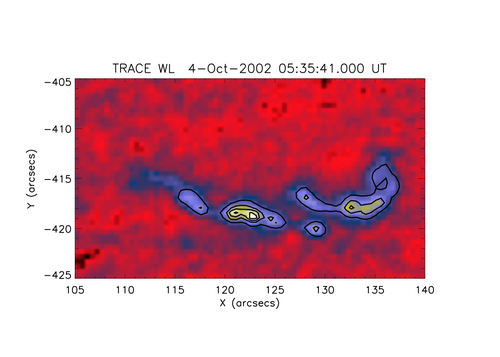 Clearly this event is pretty complicated in its structure. Now, let's see what happens when we pass the TRACE image through the RHESSI simulation software. We can't show you the simulated data, as it is what is known as an 'event list' - a list of photon energies and times of arrival - so not very interesting. But we can show the reconstructed 'model' flare made using these data. We will use the Pixons imaging algorithm, and grids 1, 3, 4, 5, 6, with a 0.5 arcsecond pixel to capture the smallest scales. We are simulating a flare with 50,000 incident counts per detector during this interval, consistent with the actual HXR data. 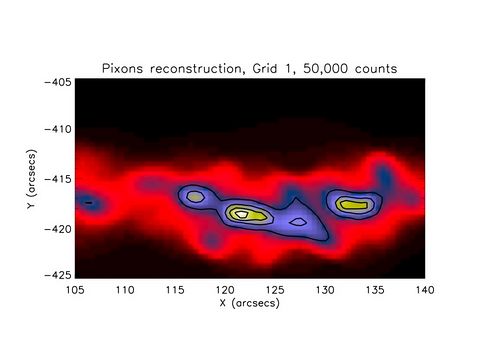 Striking similarities but intriguing differences, as we like to say. The overall shape of the flare is the same, but the brightest sources have shifted about a bit and been smeared out. Also, the contrast between the darkest and the lightest parts of the image has increased, as if many of the background counts have been gathered into the sources. As expected, information about the smallest scales has been lost.

For comparison, this is the actual RHESSI image integrated over the same time interval as was used in making the TRACE image, using grids 1,3,4,5 and 6. Here we used only pixels of 1 arcsec by 1 arcsec, so the image looks a bit more pixellated. 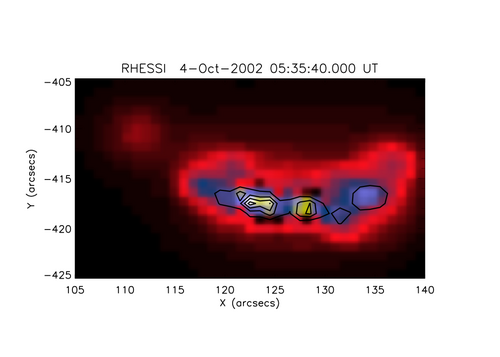 RHESSI observation of the flare being studied, using the Pixon algorithm. Contours are at 25%, 50%, 75% and 90% of the maximum

Again, there are similarities and differences. The main sources are in much the same locations as in the WL reconstruction, but the source brightnesses are different. Some of these may be due to the different time sampling of the images (the TRACE image is made from averaging three very short (~0.1s exposure) snapshots taken over a 20s interval, whereas the RHESSI image is actually integrated over the whole interval.

From our experiments we conclude that - if available - Pixon imaging using grid 1 reproduces reasonably well the source locations seen in the WL, but as one might expect the scales below 2.3" are smeared out, and the intensity distribution is altered in a way which probably depends on the source distribution, the intensity of the flare, and the imaging algorithm used. Because of the possible differences between HXR and WL sampling it is hard to say much more about how well these two wavelengths match up (also remember that the WL channel includes a lot of UV) but we will be studying this further.

A note of caution here - below is what comes out if CLEAN is used to reconstruct the model flare! All of the interesting structure in the flare is essentially lost and replaced by 2 footpoints, which are not even really in the right place... CLEAN is supposed to be good at dealing with point-like sources, as in this flare, but sometimes it clearly meets its match! 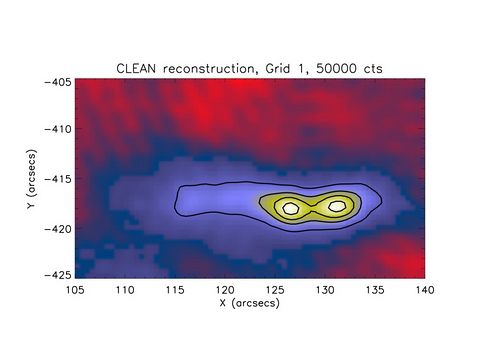 The RHESSI simulation software and imaging algorithms work well. In cases where the sources may be complicated, as in this example of a emission distributed over a whole series of compact, rapidly variable sources, we believe that one can learn a great deal. We intend to look systematically at a larger catalog of white-light flares using this technique in the future. In this case, based on the Pixon imaging, we do not see any evidence that the hard X-ray sources need to differ significantly from the white-light sources.

This Nugget is generating some feedback. Click on the "discussion" tab at the top of the page to see it.