In anticipation of Solar Cycle 24 and the hoped-for huge flares it would produce, the RHESSI germanium detectors were annealed in late 2007. This process removes radiation damage caused by the continual exposure of the detectors to the Earth's radiation belts. Now we are seeing renewed damage.

It is a bit of a race against time for RHESSI, because we think that only a limited number of anneals will be possible; eventually they may poison the segmentation of the detectors and effectively eliminate their gamma-ray response. But, so far so good, as shown in this Nugget with a new-cycle flare. Regular readers may be puzzled by this, since in recent Nuggets (April and July 2009) we have been fretting about the great delay in Cycle 24's onset. Nonetheless at the time of writing there have already been some new-cycle spots and small flares, although it is still the case that activity has not turned up as expected.

This was a GOES C1 event on July 6, 2009. Its active region was at S25, a latitude where new-cycle spots tend to appear. This region indeed had the new-cycle polarity. So, no matter how feeble this cycle may turn out to be, we have tiny flares and may hope for more energetic ones that can be observed by RHESSI at all energies, ie up into the gamma-ray range.

Figure 1 shows set of RHESSI collimator responses for this event. These (rudimentary) back-projection images give the X-ray structure at different size scales from 2 arcsec up to 180 arcsec. All but collimator 2 (that never was working properly at low energies) look fine, except that there are relative flux calibration issues due to the different degree of radiation damage. These do not stop us from making pretty pictures via more sophisticated algorithms. 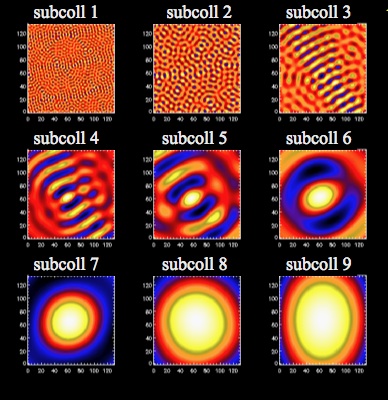 Figure 1 Individual collimator responses (5-10 keV, 17:03:38 - 17:04:48 UT) for the nine RHESSI detectors, each observing a different angular scale. Collimator 7,8, and 9 with the coarsest resolution show a single unresolved source, while the finer collimators reveal an elongated source structure. The finest collimator (1) does not show an image, indicating the absence of significant structures at the 2 arcsec scale. This is the raw material of image formation, obtained by the elementary back projection algorithm.

Note that there have been no flares yet with which we can check the RHESSI performance at higher energies (>20 keV) in Cycle 24.

This flare had little hard X-ray emission, which may be a characteristic of these solar-minimum events. We have made images at 5-10 keV by the standard RHESSI techniques and show a Maximum Entropy image in Figure 2. This algorithm may tend to "over-resolve" the image, i.e. produce untrustworthy fine structure, but to our eye it looks pretty good in comparison with the EIT 195 A image taken a few minutes later. The EUV and soft X-ray sources need not always match, but the details here show a strong correlation. 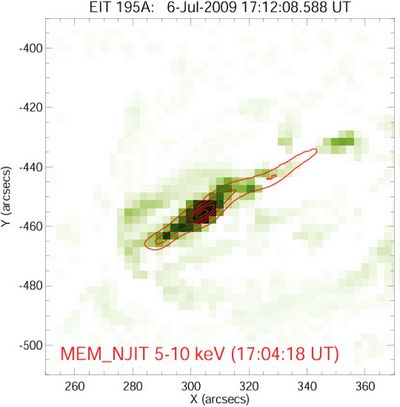 Figure 2 RHESSI image over 5-10 keV, made a maximum entropy algorithm, superposed on an EIT EUV image from a slightly later time.

This exercise has been enlightening, but we find that Cycle 24 flares behave much like Cycle 23 flares did (as expected). We do have increasing radiation damage, also as expected, but scientifically useful hard X-ray imaging was achieved. In particular the varying radiation damage in the different detectors does not prevent us from obtaining consistent data and the expected resolution. We can do better by improving the calibrations (renormalizing better between the detectors), and RHESSI can operate in its current status for the next few months. When activity seriously starts to increase (if ever!) we can schedule our second anneal and make substantial improvements in the performance.