In many space and astrophysical plasma contexts, large-scale shock waves are considered as one of the principal sites for accelerating charged particles. One of the most well-known shock types on the Sun is that driven by a coronal mass ejection. Another type of shock, known as a "termination shock", may be present in the close vicinity of a flare magnetic reconnection site. In numerical simulations, such a shock can form at the top of the flare arcade. It has thus been suggested to be the source of the above-the-looptop hard X-ray (HXR) sources and might have the signature of a slowly drifting type-II-like radio bursts (Ref. [1]). Although often mentioned in the context of particle acceleration, and these termination shocks frequently appear in flare cartoons they have received rather limited attention in the literature. Such a lack of popularity is, in part, due to the paucity of convincing observations.

In Ref. [2] we used observations from the VLA, operating at 1-2 GHz, to image a type of radio burst called a "stochastic spike burst" with simultaneous high temporal and spectral resolution. The radio centroids outlined a dynamic structure located at the ending point of fast plasma downflows and above a hard X-ray looptop source (Figure 1), interpreted as the termination shock front. A disruption of the shock was found to coincide with the reduction of both radio and HXR flux, indicative of the role of the shock in electron acceleration.

Figure 1: A schematic of the flare termination shock and the associated radio emission (manifesting as many narrow-band stochastic spike bursts) shown in (A). The shock front outlined by the radio source centroids is shown in (B) as color symbols according to their observing frequency. An above-the-looptop HXR source is located below the shock front. (C) Schematic of the physical scenario. See Ref. [2] for details.

In Ref. [3] we have extended our work on this event to a detailed study of the so-called "split-band" feature: in the spatially-resolved radio dynamic spectrum, one can see two closely spaced lanes with slightly different frequencies (Figure 2(A)). Such features have been previously observed in type II radio bursts associated with CME-driven shocks (Ref. [4]). Among other theories, one interpretation attributes the higher frequency lane to the shock downstream region with a higher density, and the lower frequency lane to the shock upstream region with a lower density. This follows from the density dependence of the plasma frequency. The observed frequency ratio of the two lanes can be used to deduce the density compression ratio across the shock. However, in order to confirm this physical scenario and to probe the shock compression in detail, observations capable of simultaneously resolving both split-band features are required. 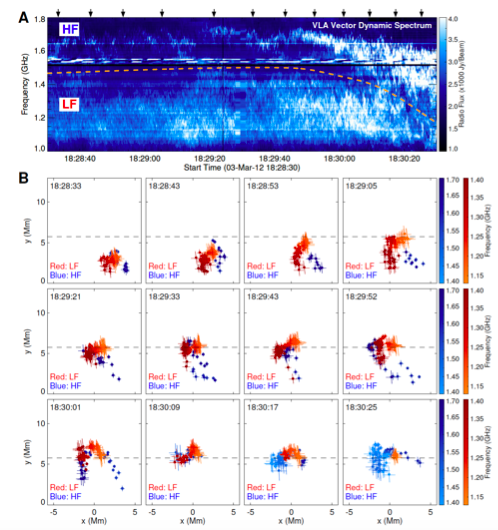 Figure 2: (A) The split-band feature in the VLA spatially-resolved radio dynamic spectrum of our event. HF and LF denote the high- and low-frequency branch of the split-band feature, respectively. (B) The spatial location of the frequency-dependent radio-source centroids. The HF and LF source centroids are shown in blue and red, respectively. Different panels are for different times (arrows in (A)).

Figure 2(B) shows the location of the split-band source centroids from the lower-frequency (red; presumably from the shock upstream) and higher-frequency (blue; downstream) lanes, respectively. They are mostly co-spatial with each other, indicating that they are likely associated with the same shock front viewed nearly edge on. Statistically, the high-frequency source is located at a slightly lower height than the low-frequency source by ~0.8 Mm (see Fig. 5 in Ref. [3]). This observation conforms very well with the shock upstream-downstream scenario: the high-frequency source with a higher density is located at the downstream side of the shock (toward the flare arcades), just below the low-frequency source with a lower density at the upstream side (toward the outflows). Similar to type-II-burst-emitting coronal shocks, the density compression ratio of the shock is found to be around 1.8, which corresponds to a shock Mach number of around 1.6 (assuming the limiting case of a hydrodynamic shock).

With these observations, we are able to derive the spatial and temporal variations of the density compression ratio along the shock front, as shown in Figure 3. Interestingly, one side (+x in Fig. 3(C)) of the shock has a stronger compression than the other side. By comparing with MHD simulations, we suggest that the observed asymmetry in shock compression may be related to the dynamic shock being disrupted by fast plasmoids. Such interactions alter the shock geometry and change the effective fast-mode Mach number along the shock front. See Refs. [4] and [3] for observations and modeling of this process. simulations (Fig. 7 in the paper). 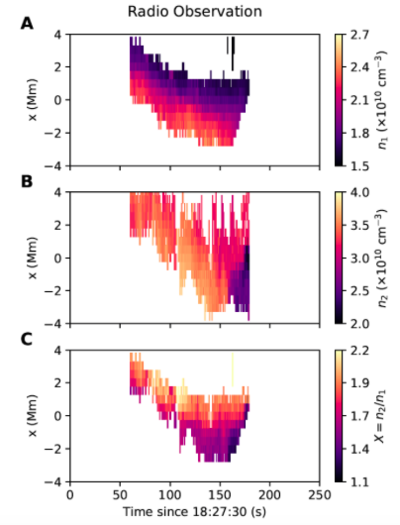 With these observations, we are able to derive the spatial and temporal variations of the density compression ratio along the shock front, shown in Fig. 3. Interestingly, one side (+x in Fig. 3(C)) of the shock has a stronger compression than the other side. By comparing with MHD simulations, we suggest that the observed asymmetry in shock compression may be related to the dynamic shock being disrupted by fast plasmoids. Such interactions alter the shock geometry and change the effective fast-mode Mach number along the shock front. For observations and modeling supporting this, see Refs. [4] and [3].

Solar flare termination shocks are likely present in the core flaring region and act as a particle accelerator, even in this weak, C1.9-class event. It remains to be seen whether or not these shocks play a major role in accelerating the bulk of nonthermal electrons. Radio imaging spectroscopy at decimetric wavelengths (around 1 GHz, corresponding to a plasma density of 109-1010 cm-3) - characteristic of the flare looptop regions - serves as an excellent new tool for mapping shock fronts in these complex regions and quantifying the shock compression. This technique, however, requires imaging with simultaneously high time and spectral resolution. Currently only the Jansky VLA provides such capabilities. But it is a general-purpose facility, meaning that one needs to compete with everybody else in astronomy for observing times during which a flare may or may not even occur! To make further progress on this topic, a solar-dedicated instrument with similar capabilities is required in the future, such as FASR.