Hard X-ray (HXR) emission from solar flares typically comes from the lowest parts of the solar atmosphere (see earlier Nuggets such as this one). Truly coronal HXR emission has also been (rarely) observed since the early 1970s, but there has been renewed interest in these sources with the availability of HXR imaging and spectroscopy via Yohkoh/HXT and now of course RHESSI. In most cases, these coronal HXR sources can be explained by non-thermal bremsstrahlung emission. However, there are some cases where the source parameters required by the bremsstrahlung model can be extreme. For example, in a recently reported case [1] the interpretation of the coronal HXR source in terms of simple bremsstrahlung emission implies that all of the electrons in the source must have been accelerated to energies >16 keV. In other cases the spectral index of the HXR spectrum of the continuum γ-ray sources approaches its theoretical limit, an unexpected property that would be hard to explain. Motivated by these cases, we have explored the viability of inverse Compton scattering (ICS) as an alternative mechanism to non-thermal bremsstrahlung (see an earlier Nugget for more explanation).

This mechanism has been in the news recently because of the Fermi discovery of ICS from highly relativistic cosmic-ray electrons penetrating the solar corona. 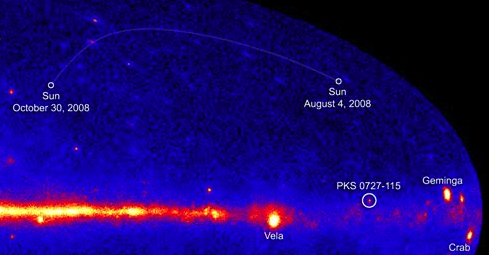 Figure 1: A part of the sky seen at high energies by the [1] satellite observatory, as presented by APOD. The bright parts of the image are the plane of our galaxy, and the streak shows emission from the vicinity of the Sun, explained as ICS from cosmic-ray electrons, as the Earth's motion carries the Sun around the sky.

ICS Emission in the Ultra- and Mildly-relativistic Regimes

Ultra-relativistic electrons with energies from 10s to 100s MeV are known to be produced during powerful flares; these are capable of up-scattering soft photospheric photons to HXR/γ-ray energies via inverse Compton scattering (ICS). Previously overlooked is the fact that mildly relativistic electrons (100s keV to a few MeV), generally produced in much greater numbers in flares of all sizes, can up-scatter EUV/SXR photons to HXR energies. In addition, anisotropic electron populations are also known to exist in solar flares. Electron anisotropies can strongly affect both the ICS emissivity and spectrum, making this mechanism particularly interesting theoretically.

Our results can be summarized as follows: first, ICS of an anisotropic photon field on an isotropic, power-law energy distribution (index δ) of ultra-relativistic electrons yields a power-law HXR photon spectrum with an index (δ+1)/2, consistent with previous studies. Figure 2 shows some of the calculations. The emission is enhanced relative to ICS by isotropic photons by a factor ~4π/Ω, where Ω is the solid angle of the photon distribution. Second, the spectral index of the HXR photon spectrum resulting from ICS of EUV/SXR photons on mildly relativistic electrons is significantly steeper than (δ+1)/2. Third, ICS of photons on an anisotropic electron distribution can yield significant changes to the photon spectrum. In the ultra-relativistic regime: i) a collimated electron beam yields enhancements to the emissivity of several orders of magnitude over the isotropic case, and the spectral index is harder: (δ−1)/2; ii) an electron beam with a finite angular dispersion yields an emissivity that is enhanced by ~2 orders of magnitude over the isotropic case, but the spectral index reverts to (δ+1)/2; iii) a “pancake” electron distribution yields enhancements of roughly an order of magnitude and the index is again (δ+1)/2. ICS on anisotropic distributions of mildly relativistic electrons is qualitatively similar to the ultra-relativistic case, but the photon spectral indices are again steeper than the relativistic case. In addition, the spectrum is more complex than the simple power law resulting from the ultra-relativistic case. It is better characterized as a broken power law that is harder at low photon energies and softer at higher photon energies. 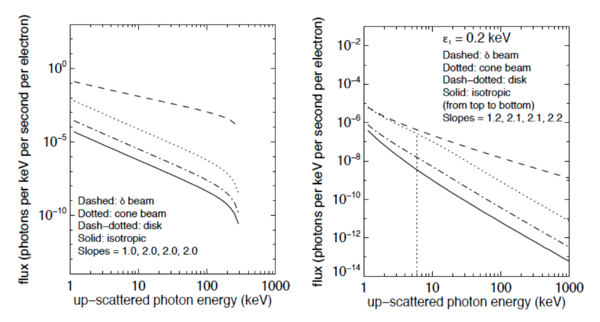 [1] Measurements of the Coronal Acceleration Region of a Solar Flare