Fast particles can excite atomic states, resulting in linearly polarized line emission. The detection of any linear polarization during a solar flare could therefore provide key evidence for the existence of a particle beam, in the so-called thick-target model. This polarization, in principle, should appear in the chromosphere, where the thick-target particle beams interact according to the model.

Accordingly, spectropolarimetric observations of strong chromospheric spectral lines (such as the hydrogen H-alpha, Na D2, or Ca II K) have long been sought, with controversial results. Some observations suggest that there is a significant linear polarization of these lines of the order of several percent observed at the edges of the flare ribbons (Reference [1]). Other observers claim no observable signatures at all (Reference [2]). The theory is complicated, but any successful observation would provide a giant step forward for the thick-target model.

We call the direct excitation of polarization "impact polarization." Like any process creating spectral line polarization, impact polarization results from an anisotropy of the medium in which the lines are formed. In particular, the impact-polarization models assume that the distribution of velocities of particles is not isotropic. If the atoms of the plasmas collide with these anisotropically moving particles, the subsequent photons emitted from the atoms are linearly polarized.

Since we have other evidence for the bombardment of the chromosphere by energetic electron and proton beams, possibly originating in the coronal reconnection site, such an explanation of the observed polarization seems to be natural. However, there are theoretical reasons to believe that this process may be not as efficient as previously thought, because of the role of the radiation transfer effects and of the depolarizing collisions with the isotropic component of the particles velocity distribution. The modeling to date has been one-dimensional, relying on the particle transport the vertical (beam) direction to produce the polarization.

There is another natural mechanism that can also provide a good explanation of the most common observational findings and that can perhaps explain even more than the impact polarization hypothesis. Similarly to the process of impact approximation, the atoms can become polarized after their exposure to anisotropic illumination. The resulting scattering polarization is a well-known phenomenon in solar physics and its most familiar manifestation is the existence of the so-called Second Solar Spectrum (.pdf file). This is a linearly polarized spectrum of the continuum and spectral lines observed near the solar limb which is caused by the anisotropy of radiation due to limb-darkening. 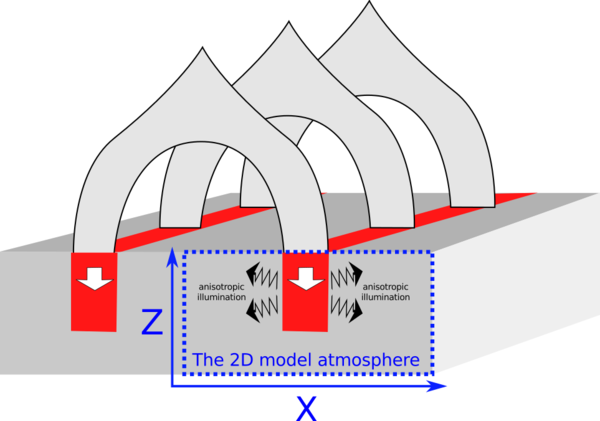 Fig. 1: The anisotropy of radiation is highest at the edges of the flare ribbons. Multi-dimensional radiative transfer calculation is needed for determination of the amount of this anisotropy.

Scattering polarization is a consequence of inhomogeneities of the physical properties of the medium. There is probably no better example of an inhomogeneous structure in the solar atmosphere than the solar flare. The radiation-field anisotropy at the edges of the ribbons can be very significant because there are many more photons coming from the strongly heated ribbon on the one side than from the `quiet' cool surrounding atmosphere on the other side. As observations improve, the spatial gradients have become steeper and steeper (e.g., an earlier an earlier Nugget). Atoms at these sharply-defined ribbon boundaries are exposed to highly anisotropic illumination, and can consequently emit strongly polarized photons. Interestingly, the spectral lines in which the flare polarization is occasionally being observed are all sensitive to the scattering polarization mechanism and they are formed in the region of the atmosphere where the anisotropy of radiation can be expected to be very high.

In order to make a quantitative estimate of the possible importance of scattering polarization, one needs to solve a multi-dimensional radiative transfer problem taking self-consistently into account the scattering polarization processes. We have considered a generic spectral line representative for a chromospheric line and a horizontally changing collisional excitation rate of the atom (Reference [3]), and show some results in Figure 2. The parameters of our multi-dimensional simulation were simple but reasonably realistic and we have found that the radiation anisotropy at the ribbon edges can certainly be high. Even with the impact-polarization mechanism completely neglected, the emergent spectral line polarization is of the order of several percent, i.e., in accordance with many observations. In addition, our model is able to explain why the polarization can occasionally be observed in the gradual phase of a flare in which there should be no particle beam present to produce the impact polarization: it is simply sufficient that there be a previously-heated ribbon that anisotropically illuminates the surrounding atmosphere. 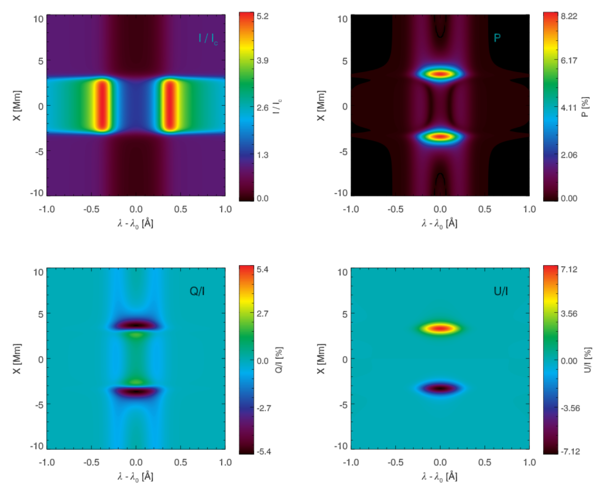 In the observations, the polarization of radiation is usually found to be parallel or perpendicular to the nearest solar limb. In the impact-polarization hypothesis, this would be a consequence of the fact that the particle beam is vertical with respect to the local surface of the atmosphere. In case of scattering polarization, the direction of polarization necessarily depends sensitively on the (random) orientation of the flare ribbon on the solar disk; this may seem to discredit the scattering polarization mechanism as being incompatible with observations. However, the same ingredient which is being used for explaining the verticality of the particle beam can be used for explanation of the direction of polarization in the scattering process: The ingredient is the magnetic field which is, in the first approximation, vertical with respect to the local solar surface. The vertical magnetic field not only forces the hypothetical particle beams to propagate along the field lines but it is also forces the electrons bound in the light-emitting atoms to precess around their atomic nulei in a particular way. Via the so-called Hanle effect in the saturation regime, the polarization of the photons created via the scattering process is again parallel or perpendicular to the nearest solar limb, consistently with the observations. We illustrate this in Figure 3.

Fig. 3: After inclusion of the effect of a vertical magnetic field with an intensity of 500 gauss, the polarization becomes practically radial with respect to the nearest solar limb (as quantified by the Q/I value, while U/I is negligible).

Spectropolarimetric observations of solar flares are extremely difficult due to the need of high spatial and time resolution. The physical mechanisms taking place in the chromospheric ribbons are likely to produce some amount of polarization in spectral lines because the whole system is highly anisotropic. The relative importance of the impact and scattering contributions to any observed polarization remains an open question. However, it is indeed not possible to reduce the complex multi-dimensional physics of the problem to a trivial correspondence between the emergent linear polarization signal and an energy of a particle beam. Instead, we need more careful multi-line observations and multi-dimensional modeling of flares. At present we cannot reliably interpret linear polarization in flares as supporting evidence for thick-target particle beams.

[2] Absence of linear polarization in Hα emission of solar flare"