Solar flares involve the sudden release of magnetic energy in the solar corona. Accelerated nonthermal electrons have been often invoked as the primary means for transporting the bulk of the released energy to the lower solar atmosphere. However, significant challenges remain for this scenario, especially in accounting for the large number of accelerated electrons inferred from observations. Propagating magnetohydrodynamics (MHD) waves, particularly those with subsecond/second-scale periods, have been proposed as an alternative means for transporting the released flare energy likely alongside the electron beams (Ref. [1]). Observational evidence remains elusive. Here we report possible observational evidence for these subsecond-period MHD waves in the late impulsive phase of a two-ribbon flare. This is based on ultra-high cadence dynamic imaging spectroscopic observations of a peculiar type of decimetric (dm) radio bursts obtained by the Karl G. Jansky Very Large Array (VLA).

The decimeter bursts were observed by the VLA between in 1.0-1.5 GHz during a GOES-class C7.2 solar flare associated with a failed filament eruption and large-scale coronal EUV waves (Ref. [2]). Figure 1A shows the dynamic spectrum of the decimeter bursts. Two main episodes can be distinguished in the dynamic spectrum, each of which lasts for about 1000 seconds. In the dynamic spectrum, the bursts appear as multiple arch-shaped emission lanes, which display a low-high-low frequency drift pattern with a moderate relative frequency drift rate of dν/νdt = 0.2 s-1. The total frequency variation can be up to 30%.

Figure 1: A) Composite EUV image of SDO/AIA 304 Å (red), 94 Å (green), and 221 Å (blue) EUV bands showing the flare context. White contours are 12-25 keV HXR emission by RHESSI during the early flare implusive phase. (B) VLA cross-power dynamic spectrum in which the dm-λ bursts are present. (C) AIA 304 Å background-detrended image sequence at times marked by the black vertical arrows in (B), showing the EUV ribbon brightenings near the radio sources. Red contours are the radio emission that correspond to the Bursts (the time and frequency are marked in the dynamic spectrum of panel A as red circles). Green arrows indicate the location of the transient EUV brightening.

Radio imaging of the bursts places the burst source (red contours) near the northern flare ribbon, as shown in Figure 1B. The background is the AIA 304 Â background-detrended image sequence during the time interval of the radio dynamic spectrum shown in panel A. During this period, the northern ribbon is featured by the appearance of two transient EUV brightenings during radio bursts, and the location of the brightenings is very close to the radio source. The appearance of the radio source during the flare impulsive phase, as well as its close spatial and temporal association with the ribbon brightenings, suggests that the radio source is intimately related to the release and transport of the flare energy.

More detailed inspection of the dynamic spectral features of the stronger burst (Burst 2) reveals multitudes of very short, subsecond-scale fine structures on each emission lane (Figure 2A). Figures 2(B-E) provide an enlarged view of four segments of the emission lanes for the burst (labelled as S1, S2, S3, S4 in Figure 2(A)), which have been detrended to remove their overall frequency drift pattern. The bursts appear to oscillate in their emission frequency around the central ridge of the emission lane quasi-periodically with period of ~0.3-1 s and damping times of ~0.5-5 s in amplitude

The capability of simultaneous imaging and dynamic spectroscopy offered by the VLA allows each pixel in the dynamic spectrum to form a radio image. The emission centroid location was fit with high accuracy owing to the high signal-to-noise of these bursts. Figure 3(B) shows the resulted centroid positions as a function of frequency, as colored dots from blue to red in increasing frequency, for the selected emission lane (enclosed by the white contour in panel A). Figure 3(C) shows the same distribution of radio centroids as in panel B, but instead colored in time. It displays an evident motion in projection: The radio source first moves toward the flare ribbon as frequency increases until it reaches the maximum frequency at the lowest height, and then bounces back to the opposite direction away from the ribbon as frequency decreases. The average speed in projection is ~1000-2000 km s-1, which is typical for propagating Alféven or fast-mode magnetosonic waves in the low corona. This is a strong indication for the radio emission to be associated with a propagating Alféven or fast-mode MHD disturbance in a magnetic tube in the close vicinity of the flare ribbon. 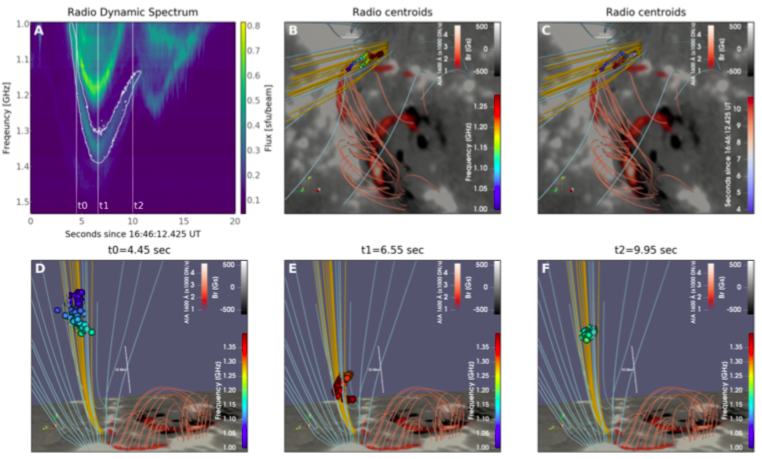 Figure 3: A) Dynamic spectrum of Burst 2. All the frequency-time pixels selected for dynamic spectroscopic imaging are enclosed by solid white curves. (B) Burst centroid locations of the selected frequency-time pixels. Each centroid represents the average location of all frequency pixels across the emission lane at a given time, colored in their mean frequency (frequency increases from blue to red). Colored curves are selected magnetic field lines from the potential field extrapolation model based on the SDO/HMI line-of-sight photospheric magnetogram observed at around 17:00 UT (grayscale background). Field lines with pink color denote closed field associated with the reconnected loops, while those with yellow (cyan) color denote open field lines that connect to the northern ribbon (sunspot). The double flare ribbons seen in AIA 1600 Â are shown in red. (C) Similar to panel B, but the centroids are colored from blue to red in time. (D-F) Emission centroids of the emission lane in three dimensional view at three 100 ms integrations (denoted as t0, t1 and t2 in panel A). The centroids are colored from blue to red in increasing frequency.

The bursts have high brightness temperatures, above >107 K, and are completely polarized. They are likely to have been emitted at the fundamental of the local electron frequency, fpe~ne1/2, where ne is the electron number density. In this case, the emission frequency fpe of the radio source centroid can be directly translated into plasma density of the source ne. By assuming a coronal density model, we can thus map the measured centroid locations in 2D projection to three dimensional (3D) locations in the corona. Figure 3(D-F) show the inferred 3D spatial and temporal evolution of the radio centroids of emission lane, viewing from the east side of the active region. It is clear that the radio source first moves downward along a converging magnetic field tube (panels D and E) and then bounces backward after it reaches the lowest altitude (or highest frequency).

Nature of the propagating radio source

We interpret the observed radio bursts as short-period MHD wave packets, likely triggered by the impulsive flare energy release, propagating along newly reconnected magnetic flux tubes that link to the flare ribbon (Figure 4). The observed reflection of the waves at or near the flare ribbon may be due to sharp gradients at and/or below the transition region. The small-amplitude oscillations in frequency can be interpreted as weak density perturbations associated with the propagating MHD waves. As stated in the Introduction section, subsecond-period MHD waves may be a viable mechanism responsible for transporting a substantial amount of the magnetic energy released in the corona downward to the lower atmosphere, resulting in intense plasma heating and/or particle acceleration. From the observed density oscillations and the source speed, we estimate that these wave packets carry an energy flux of 2-8 x 108 erg s-1 cm-2 , which is comparable to the average energy flux required for driving the flare heating during the late impulsive phase of the flare estimated from the UV ribbon brightenings. 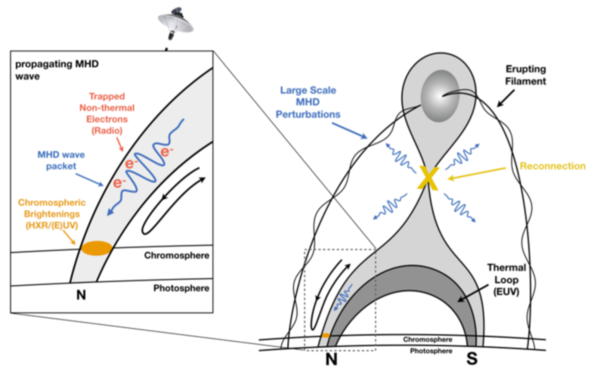 Figure 4: Schematic illustration of the observed radio bursts of interest. The impulsive energy release associated with the filament eruption and the two-ribbon flare generates ubiquitous MHD disturbances, some of which propagate along newly reconnected field lines in the form of MHD wave packets that contain multiple subsecond-period oscillations. Electrons trapped or accelerated within these wave packets generate Langmuir waves and convert to radio emission. Some of the wave packets can reflect at or near the flare ribbon due to sharp gradients, resulting in the observed spatial motion of the radio source and the low-high-low frequency drift pattern of the radio burst in the dynamic spectrum. The (E)UV brightenings at the flare ribbon may be associated with heating by the precipitated energetic electrons or the deposited wave energy.

We report possible detection of subsecond-period propagating MHD Waves in post-reconnection magnetic loops during the late impulsive phase of a two-ribbon flare, based on imaging spectroscopic observations of a peculiar type of decimetric radio bursts recorded by the VLA. The radio sources, propagating at 1000-2000 km s-1 in projection, show close spatial and temporal association with transient brightenings on the flare ribbon. In addition, multitudes of subsecond-period oscillations are present in the radio emission. We interpret the observed radio bursts as short-period MHD wave packets propagating along newly reconnected magnetic flux tubes linking to the flare ribbon. The estimated energy flux (2-8 x 108 erg s-1 cm-2) carried by the waves is comparable to that needed to account for the plasma heating during the late impulsive phase of this flare.