"Stealth" CMEs (Coronal Mass Ejections) are those that lack the typically-observed solar counterparts, such as filament eruptions, solar flares, post-eruptive arcades, EUV dimmings and EUV waves. These all tend to appear in the lower solar corona at the time of an ordinary CME. The lack of such signatures means that the source regions of these events cannot be easily identified on the solar disk, complicating both space weather forecasting and our ability to understand the formation and eruption of CMEs. Interest in these types of events has risen due to both their high frequency (they are especially prevalent at solar minimum) and their geomagnetic impact, which may be substantial [1].

A fundamental question is whether or not stealth CMEs are different from non-stealth events. Howard and Harrison (Ref. [2]) suggested that stealth CMEs sit at the lower-energy end of a continuous spectrum of events, and that the classification of this type of event is a purely observational one. If this were the case, then the trigger and driver mechanisms that are currently proposed for CMEs should be relevant and, once the eruption is underway, observational signatures of the CSHKP standard flare model should be sought with appropriate instrumentation or image processing techniques. The non-detection of the antecedents of a stealth CME would simply be a reflection of observational sensitivity.

An Earth-directed CME with a faint leading edge was detected by the STEREO coronagraphs on 3 March 2011 (SOL2011-03-03). The CME can be seen in Figure 1 to have a clear circular shape, suggestive of the presence of a flux rope in the erupting structure. Our analysis (Ref. [3]) showed that the footpoints of the eruption were east and west of a small active region (NOAA 11165) in the southern hemisphere. The propagation of the concave-up section of the CME is clearly visible in the COR1-A stack plot. However, the slow-rise to fast-rise transition of the underside of the CME was not visible in EUVI data. This, combined with little to no structure observed in the EUVI, may be the result of the CME being initiated from a high-altitude structure with weak plasma emission. 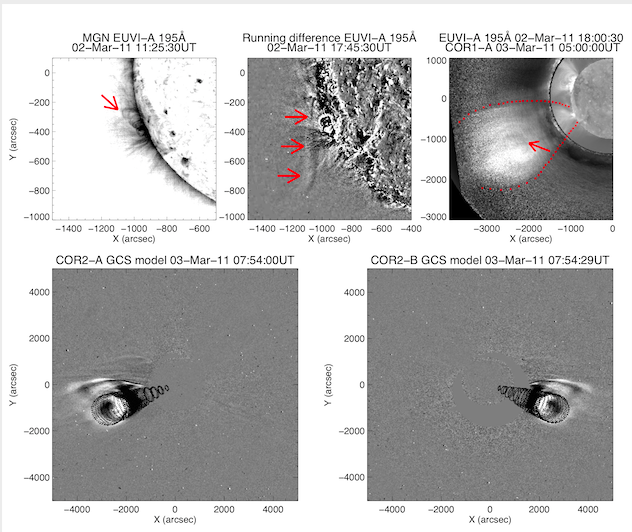 Figure 1: Top : (Left) A processed EUVI-A 195 A image. An expansion of bright loops was observed to the north of the active region, indicated by the arrow. (Center) Time difference EUVI-A 195 A image, with a 30-minute temporal separation. A structure was observed stretching from the north to the south, and traveling outwards from the solar disk, indicated by the red arrows. (Right) Combined EUVI-A 195 A and COR1-A image. The combination illustrates how the bulb-structure in the EUVI images prior to the eruption expands into the CME structure observed in the COR1 images, outlined by the two dotted lines. Bottom : The wire frame fitted to the CME in COR2-A (Left) and COR2- B (Right).

Prior to the stealth CME, there was a filament eruption immediately adjacent to the active region on its western side. With sensitive image analysis we could find enhanced subtle changes in the evolution of plasma emissions structures around active region 11165, both on the solar disk and off-limb from the two spacecraft perspectives (Figure 1). The formation of new EUV loops prior to the stealth CME, without any observed flux emergence at this time, suggests coronal reconnection, which may have played a role in creating the pre-eruptive field. A flow observed in EUV data coincides with a brightening in radio frequencies around 150 MHz from a source that appears to the south of active region NOAA 11165, as viewed in the plane of the sky. The 150 MHz emission, imaged by the Nançay Radioheliograph, corresponds typically to an altitude of 0.34 solar radii (238 Mm), supporting the hypothesis that the stealth CME was ultimately the result of a reconfiguration of the high-altitude magnetic field.

Following the stealth CME, two faint EUV dimming regions were located at the periphery of active region 11165, close to the footpoint locations predicted by the model (Figure 2). Furthermore, new loops were observed to slowly form over the active region, which - given their close association to the EUV dimmings - we consider to be post-eruption loops. Analysis of the activity in the lower corona as observed both on disk and at the limb, and the CME propagation as seen in coronagraph data, together confirm that the stealth CME of 3 March 2011 originated at a relatively high altitude above the core active region loops of active region 11165.

Figure 2: (Left) AIA 211 A Running ratio image at the final time of EUV dimming tracking. (Right) AIA 211 Â plain image with inverted colour table showing the evolution of the dimming regions north and east of the active region, outlined with contours. The dimming regions evolved over a 9-hour period. Both images are de-rotated to the start time; 00:00 UT 03-Mar-2011.

We have carried out a similar careful stereoscopic analysis of the stealth CME SOL2009-10-27 (Ref. [3]), with equivalent results: weak but real effects in the low corona at the origin of this event as well.

Our full study used advanced image processing techniques to identify and study the source regions of two stealth CMEs that were observed in multi-spacecraft coronagraph data on 27 October 2009 and 3 March 2011. We found that both stealth CMEs originated in active-region areas, likely at altitudes of 0.5R above the photosphere. In the event of 27 October 2009 we find observational support for the presence of a flux rope formed by reconnection in the corona during or before the slow rise phase of the CME. The flux rope may have been destabilised as a sympathetic eruption following a nearby CME. We find that the stealth CMEs of this study are no different to other CMEs in that they show features of the standard model, but at the lower energy end of the spectrum with weaker signatures that current instrumentation can only just resolve.