Submillimeter Radiation as the Thermal Component of the Neupert Effect

The differing time profiles of hard and soft X-rays, during solar flares, already excited attention by the time of a NASA conference in 1964 (Ref. [1]), in which data from the very early OSO-1 observations appeared. During this time as well the simultaneity of microwave impulsive bursts and hard X-ray bursts became known, and this has led to our understanding of what we now call the "Neupert Effect" (Ref. [2]).

where FSXR is the soft X-ray (SXR) flux, typically 1-8 Â, and FMW is the microwave flux density, typically at 10 cm wavelength. This relation holds until rFSXR reaches its maximum flux, which should coincide with the end of the microwave emission. A similar relation between the SXR and the hard X-rays (HXR) also follows. This observational fact is conventionally interpreted in terms of the solar tmosphere's response to the heating produced by the energetic particles when they precipitate into the lower and denser layers: energetic electrons spiraling within the magnetic fields produce synchrotron radiation observed at MW, while the HXR is the nonthermal bremsstrahlung produced by Coulomb collisions. In this process energy transferred energy to the chromospheric plasma results in its expansion, producing the thermal bremsstrahlung observed at SXR. This is known as "chromospheric evaporation" (Ref. [2]). Reciprocally we can also write

Solar flare observations at submillimeter frequencies (above 100 GHz) are relatively new. For this reason the physical origin of the emission is still a subject of debate. Thermal bremsstrahlung and synchrotron radiation, or a combination of both, are the main candidate sources of radiation at high frequencies (Ref. [3]). Other mechanisms have also been suggested. The lack of a better spectral coverage toward the THz range has thus far prevented drawing definitive conclusions. Generally the gradual phase of a flare may have a better interpretation in terms of thermal bremsstrahlung, whereas the impulsive phase would show gyrosynchrotron radiation at least at the longer wavelengths. See Ref. [4] for a study of one flare whose emission between 93 and 140 GHz increases with frequency, and can be attributed solely to thermal bremsstrahlung.

The event SOL2011-02-14T17:25 was associated with a GOES M2.2-class SXR flare in the active region NOAA 11158. The Solar Submillimeter Telescope at El Leoncito SST tracked AR11158 from the day before the event. The SST observed the flare at 212 GHz with the three beams that compose its multi-beam system, which provide the instantaneous emitting centroid and its flux density every 0.04 s. The flare was detected in HXR by the Gamma-Ray Burst Monitor (GBM) on Fermi. In our analysis we used the NaI 128 energy channels in the range from 4 keV to 2000 keV and 1.024 s time resolution. Unfortunately there were no RHESSI data during the impulsive phase of the event. We complement our analysis with MW from the RSTN network, and with GOES 1-8 Â SXR (1.5-12 keV) with 2 s time resolution.

Figure 1 presents a selection of the different frequency / energy time profiles. At the lowest energies, GOES 1.5-12 keV the emission has a smooth evolution starting at 17:23 UT, with a simple structure peaking at 17:26 UT, and returning to pre-flare level not before 18:40 UT. The Fermi 12-25 keV band starts and ends with GOES, but it shows two peaks: at 17:25:20 UT and at around 17:26:40 UT. On the other hand the impulsive phase at MW and HXR, have a common shape, with delays of less than 1 s between the strongest structures. Emission starts at around 17:24 UT and ends by 17:27 UT. A closer look at the time evolution at different frequencies and energy bands can be seen in Figure 2, in the left panel we present the normalized flux at 212 GHz (shaded dark gray), 15.4 GHz (shaded light gray) and 100-300 keV HXR (black curve). We observe that during the impulsive phase, defined by HXR, there is an excellent match between features observed at HXR and 15.4 GHz, with no detectable delay. In contrast, the submillimeter emission is, smoother, almost featureless, and its peak is delayed by > 20 s respect to HXR. The cross correlation between HXR and 15.4 GHz (HXR and 212 GHz), graphically shown in the inset with a continuous line (dashed line) are a quantitative way to remark the coincidence (lack of coincidence) of the time evolution at different frequencies. The cross correlation between HXR and 15.4 GHz is maximum for zero lag, while between HXR and 212 GHz it peaks at a lag of 25 s. 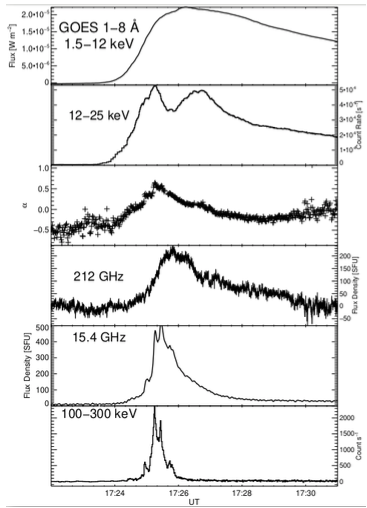 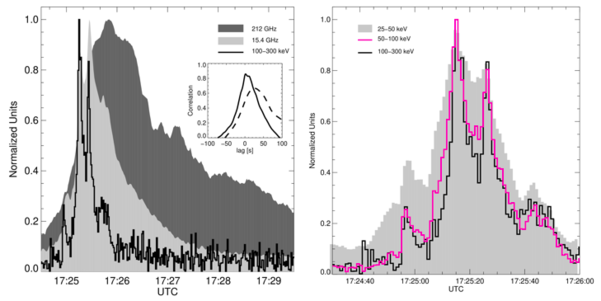 SST cannot image a source, but it can determine the location of the centroid of emission. In Figure 3 we show an UV image at 1700 Â taken by SDO at 17:28:31 UT, to avoid the saturated pixels. The red cross is the solution of the iterative multi-beam technique, the dashed red circle is its absolute uncertainty. The small green cross shows the center of the brightest and biggest UV source. The dashed black curves are the three 212 GHz beams used in the multi-beam solution represented at 50% and 75% levels; black crosses are the beams centers. 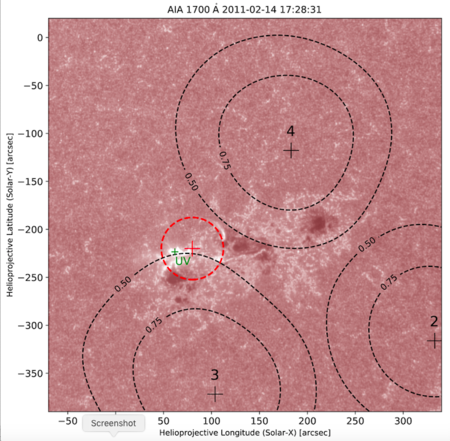 We binned the Fermi GBM's NaI detectors, wutg 128 energy channels, into three HXR bands : 25-50 keV, 50-100 keV and 100-300 keV. These bands were chosen in order to avoid the contribution from the thermal emission below 20 keV and the noise above 300 keV. We numerically integrated the HXR counts between 17:23 UT and 17:32 UT. The resulting curves were compared with the 212 GHz flux density time evolution (Figure 4, left). We note a coincidence between the maximum of the fluence 50-100 keV and the peak at 212 GHz. For the 25-50 keV band the fluence only reaches its maximum at the end of the time interval. Nonetheless it is worth to note that it follows the initial 212 GHz emission curve between 17:24 UT and 17:25 UT remarkably well. We computed the time derivative (Eq. 2) of the 212 GHz flux density using a three-point quadratic Lagrangian interpolation for unevenly spaced data and plotted its positive values along with the 50-100 keV count rate (Figure 4, right). We have smoothed the 212 GHz data, using a 12 s running mean, to reduce the noise from the derivative procedure.

This Nugget has described a peculiar event (SOL2011-02-14) observed at the exceptionally high radio frequency of 212 GHz. The emission detected appears to be simple thermal bremsstrahlung during both the impulsive and gradual phases of the flare. During the impulsive phase the 212 GHz emission comes from a thermal source at chromospheric heights and its time derivative mimics the HXR flux conforming with the thermal counterpart of the Neupert effect. During the extended phase, the sub-THz emission might be characterized as optically thin thermal bremsstrahlung, from a coronal multi-thermal source as described in Ref. [5]. For full detail on these observations, please see Ref. [6].

[6] "Submillimeter radiation as the thermal component of the Neupert Effect"

Retrieved from "http://sprg.ssl.berkeley.edu/~tohban/wiki/index.php/Submillimeter_Radiation_as_the_Thermal_Component_of_the_Neupert_Effect"
Category: Nugget
Facts about Submillimeter Radiation as the Thermal Component of the Neupert EffectRDF feed