Solar flares crucially involve particle acceleration somewhere within the solar atmosphere, and we study this remotely via this via hard X-ray and gamma-ray emissions produced by these particles. This has been RHESSI's key domain in solar physics, but now there are new and improved approaches to these difficult observational problems.

The HEROES (High Energy Replicated Optics to Explore the Sun) mission is a collaborative effort between the NASA Marshall Space Flight Center and the NASA Goddard Space Flight Center to upgrade an existing payload, the High Energy Replicated Optics (HERO) balloon-borne telescope, to make unique scientific measurements of the Sun and astrophysical targets during the same flight. On September 21, 2013, HEROES was launched successfully from Fort Sumner, NM at 05:55 am local time. HEROES remained at float altitudes for a total of 24 hours and spent a total of 7 consecutive hours observing the Sun. This nugget is a summary of the flight. A future Nugget will discuss the science results from this flight. 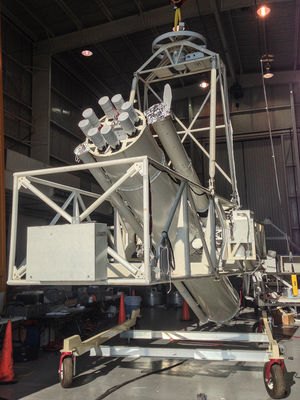 Fig. 1:The HEROES payload practicing solar pointing in the hangar at the Fort Sumner airport.

HEROES was funded by the NASA HOPE (Hands On Project Experience) Training Opportunity awarded by the NASA Academy of Program/Project and Engineering Leadership, in partnership with NASA's Science Mission Directorate, Office of the Chief Engineer and Office of the Chief Technologist. HOPE is a one-year program to provide early-career NASA employees experience on a flight program from conception to actual flight. In practice, HOPE participants develop, build, and fly an instrument on a sub-orbital program while maintaining similar standards and reviews to a large scale flight mission.

The HEROES science payload is a hard X-ray telescope. Similar to FOXSI which flew successfully one year ago in November of 2012, HEROES also uses high-resolution MSFC-developed hard X-ray grazing-incidence optics. Unlike FOXSI, HEROES cannot observe below about 20 keV due to the fact that high-altitude scientific balloons can only reach altitudes of about 40 km. At this height the atmosphere is still thick enough to block X-rays below that energy. On the other hand, a scientific balloon platform can accommodate much larger payloads, so the HEROES optics have a 6 meter focal length as compared to FOXSI's 2 m. This means that HEROES can observe all the way up to 60 keV emission. Another big advantage for balloon payloads is that they can fly for much longer durations, making it much more likely to catch a flare during a flight. The HEROES telescope consists of a total of 8 identical mirror modules and makes use of position-sensitive xenon gas-scintillation proportional counters as the focal-plane detectors. You can see a photo of the payload in Figure 1.

The solar objectives for this HEROES flight were to

The original HERO payload has flown several times already, most recently in 2011 from Alice Springs, Australia to observe the Crab Nebula under the leadership of Dr. Brian Ramsey. To point to astrophysical targets, the HEROES payload uses a sensitive star camera which identifies star fields in real-time with sub-arcminute accuracy. Unfortunately this aspect system cannot be used to point to the Sun because it would be blinded and possibly damaged by the bright and resolved Sun. As part of HEROES we therefore developed a solar aspect system (SAS, little relation to the RHESSI SAS!) to add to the HEROES payload to provide solar pointing ability and knowledge. The original conception of the SAS must credit the aspect system being developed for the The Gamma-Ray Imager/Polarimeter for Solar flares (GRIPS) another balloon payload being developed by one of the authors of this article! The purpose of the SAS was to provide real-time solutions to the pointing system to keep the target in the center of the field of view as well as providing high-accuracy pointing knowledge post-flight. If you want details about this system please refer to our paper in HEROES SPIE Paper. As you likely imagine, pointing a 6-meter-long telescope to the Sun with arcminute accuracy is difficult especially as you are hanging from a gigantic balloon at 40 km! Preliminary analysis of the pointing stability as measured by the SAS system are excellent and can be seen in Figure 3. The pointing knowledge is likely better than 10 arc seconds. 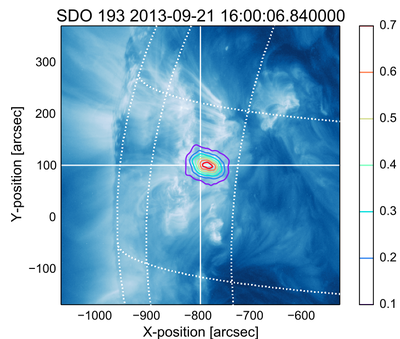 Fig. 2: The HEROES pointing accuracy overlaid on an AIA image. The accuracy of the pointing was about 1 arc minute as show by the pointing contours. Pointing knowledge is on the order of a fraction of an arc minute. This size of this image is roughly the HEROES field of view. 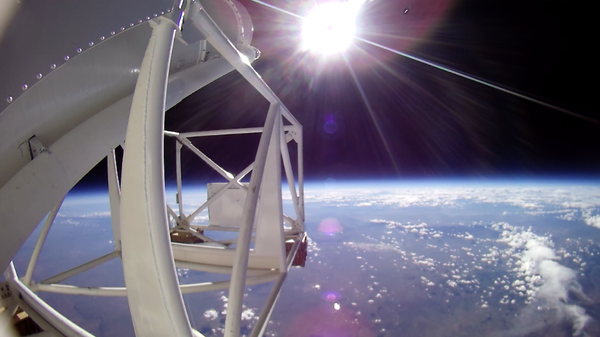 Fig. 3: HEROES during flight pointing at the Sun.

The HEROES field of view is about 9 arcminutes (at 40 keV) so it cannot observe the entire Sun; therefore choosing a pointing target is important. Solar activity before the flight suggested that AR #11850 was the most likely to flare. We therefore chose to point exclusively to that region during the flight. Of course, it was always possible to repoint to another region if activity picked up elsewhere on the Sun. Thankfully/Regretfully we were not forced to make such a choice. Solar activity remained at very low levels during the duration of the flight as you can see from the GOES light curve shown in Figure 4. Though we were hoping to observe a flare with HEROES our primary science goal was not dependent on our fickle Sun! We will be sifting through our data to see whether we detect any hard X-ray signal from a non-flaring active region and those parts of the quiet Sun which were in our field of view to look for any sign of accelerated electrons. Since the chosen active region was at the limb we should have a good measurement of our background and should therefore be able to detected previously undetected weak emission or set new limits if no emission is seen. These HEROES observations will eventually provide the definitive measurements of quiet-Sun hard X-ray emission. 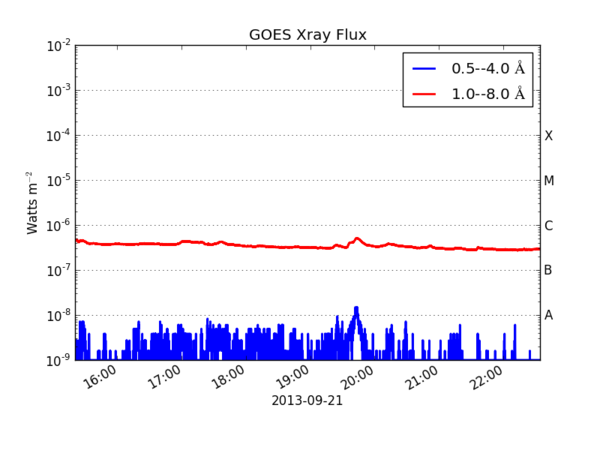 The HEROES flight was a success and data analysis is ongoing. A proposal for the next generation of HEROES, called Super-HERO, has already been submitted. In this mission we will replace the detectors with new solid-state detectors combined with active shields to provide even higher sensitivity. We also are designing a new payload so that we can fly in Antartica which gives us access to flights as long as 4 weeks long, making it much more likely that we will observe a substantial solar flare.