To do arc-second imaging spectroscopy, RHESSI needed to have an aspect system with sub-arcsecond precision. The way in which this was accomplished has led to a quite interesting database of a unique sort, as described in this Nugget, generated by the Solar Aspect System (SAS; see Ref. [1]). This database consists of a very large number of 1D images of chords across the nearly circular solar image, at random orientations. Most of these record just the few pixels at the location of the solar limb, but many cover the full diameter of the Sun. All of them help to define the location of the limb at high temporal and angular resolution. One should note that the solar atmosphere is gaseous, in actuality a plasma with weak ionization but a strong and complicated magnetic field. The measure of fuzziness is the ratio of one gravitational scale height to the mean solar radius, which is of order 0.02% (200 parts per million, ppm). In relative terms this might seem quite sharp, and indeed images of the Sun at visible wavelengths show it to be rather well-defined.

Somewhat confusingly we can measure its location with much greater precision than the scale of the fuzziness, for example by using RHESSI/SAS data.

If it is fuzzy, why do we care about precise measurements? In this Nugget we show that SAS worked very well indeed, and this signals some good news for the stability of RHESSI hard X-ray image quality.

RHESSI rotates with an approximately 4 sec period, and also nutates somewhat because of stray torques imposed on the spacecraft. SAS consists of simple lenses focused on three linear CCDs whose 1D images almost always cross the disk of the Sun, defining its edge location (the limb). The nutation means that RHESSI wobbles, and the X-ray image (produced by shadow patterns) moves continously around relative to the detector arrays. Figure 1 illustrates the geometry.

Figure 1: Illustration of the layout of the three SAS linear detectors, each 2048-pixel CCDs. At any point in time, because of RHESSI's complicated rotation and nutation, these linear detectors can intersect the solar disk at any angle and almost any position. With the six limb intercepts, one can robustly determine the location of Sun center.

The three SAS imagers are very unusual telescopes in that they are rotating continuously and rapidly around axes that lie close to their optical axes. The linear CCDs have sufficiently fast readout to make this possible with very high time resolution, identifying Sun center as shown in the sketch. Because RHESSI time-tags each individual X-ray/gamma-ray photon, this allows for a separate aspect solution for each count.

This aspect-solution function of SAS depends upon the limb data only, but (as described in this Nugget) we get many full images that show chords across the solar disk. Some earlier Nuggets have described simple imaging (with a time resolution of about one month!), a Venus transit, and signatures of faculae. We have also used a small susbset of the data to measure the oblateness of the Sun to high precision (Ref. [2]).

Data acquistion by RHESSI ended in 2018, and so a complete database now exists. In this Nugget we briefly describe a very simple use of the a subset of these data, the complete 1D images. Figure 2 shows the number of such images acquired per orbit (about 5000 sec) over the full interval. 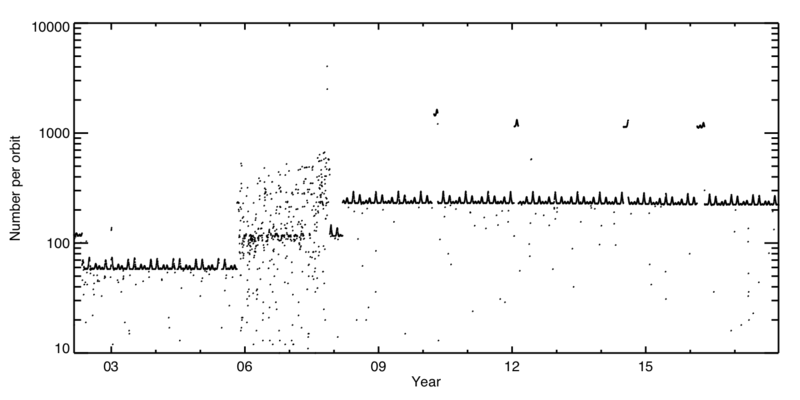 Figure 2: The number of images in one of the three SAS sensors per orbit, over the full mission lifetime (one sample per day, hence about 1/15 of the full number). The plot shows variations in the pattern of data acquisition as spacecraft operations evolved. The four clusters of points in the range 1000-1500 samples per orbit are the times in which RHESSI was annealing its X-ray/gamma-ray sensors and we could increase the SAS telemetry usage. One can also see the clear signature of the seasonal variations of RHESSI orbital motion, which cause the length of orbit day to change systematically.

We have looked quickly at the anneal intervals of dense sampling of SAS data. These conveniently lasted for about one month, but long enough to reveal subtle systematic effects that might compete with the averaging. The results show rather spectacular stability, as displayed in Figure 3. 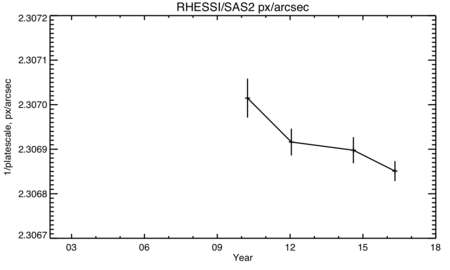 Figure 3: The long-term stability of the plate scale for one of the SAS sensors, shown here as px/arcsec.

This stability means that the RHESSI metering tube was not shrinking significantly in the latter half of the mission. This was a known risk because of outgassing in carbon composite materials, but we had already dismissed this risk before launch via a protracted vacuum bakeout of a flight spare. Based upon this limit to the systematic error in RHESSI image registration, we believe that the limit for uncertainty in the absolute solar-radial location of each X-ray photon is better than 0.5 arcsec. Much more detailed results will emerge from further analysis of the database, which we have only glanced at so far.

The SAS observations of the location of the visible solar limb show that the RHESSI metering tube nicely met its stability specification over the extended mission. This stable dataset, only a tiny fraction of which was used (and in the simplest kind of analysis) also will have things to say about the structure and variation of the solar limb, as our early oblateness result (Ref. [2]) had already suggested. This work remains to be done, we hope via access to the RHESSI legacy database - too be finalized after the U.S. government shutdown has ended! We hope that any secular change of the solar diameter can be pinned down more accurately than the limit set by the excellent observations of Ref. [3]. We note that the relative diameter of the Sun competes directly with the systematic error of focal length, which we have just discussed, and we hope that other factors may help us to disentangle true time-series variations of solar diameter from any other source of variation in the data.

[2] "Large Excess in Apparent Solar Oblateness Due to Surface Magnetism"