The Redistribution of Nonthermal Electron Energy

It is widely accepted that the hard X-ray emission that RHESSI observes come from thick-target interactions between accelerated electrons and the dense chromosphere. These same particles are also responsible for heating the plasma, and - either directly or indirectly - driving increases in emission across a broad spectral range. But what is the relationship between the properties of the parent electron distribution (including the total energy) and the response of the lower solar atmosphere? By what physical mechanism is the associated optical, UV and EUV emission generated? And where in the Sun’s atmosphere do these processes take place? To answer these questions, we need to look for a flare that has been observed by a wide range of instruments that sample the flaring chromosphere at high cadence, in addition to RHESSI.

The first X-class flare of Solar Cycle 24 - the X2.2 on 15 February 2011 - is perhaps the most-studied flare in the modern era, certainly of the current cycle. Over 40 refereed publications exist in the literature to date, that either focus on it or its source active region (RHESSI's first gamma-ray event, SOL2002-02-23, might be a competitor). SOL2011-02-15 was also observed by RHESSI as well as many other instruments in space and on the ground. Figure 1 shows a CHIANTI model flare spectrum with the spectral ranges covered by instruments on SDO and Hinode during the event, at <20 s cadence. This extensive spectral coverage makes this flare an ideal candidate for which to compare the response to nonthermal electrons over a broad spectral range. 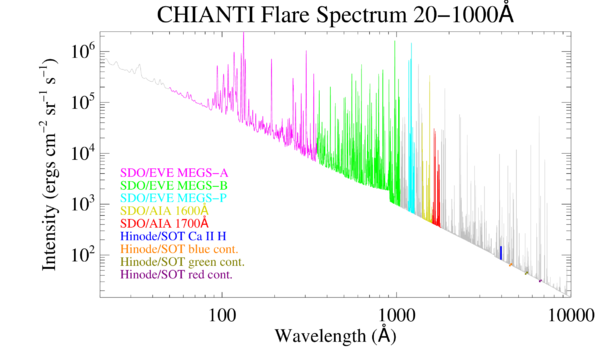 Figure 1: Synthetic flare spectrum from CHIANTI showing the spectral ranges covered by instruments on SDO and Hinode during the 15 February 2011 flare.

RHESSI spectra were compiled for ten 60 s integrations throughout the impulsive phase, for each detector individually. The fits to the nonthermal component could be used to determine the total power in nonthermal electrons (Figure 2b). Averaging over detectors 3-6, 8, and 9 accounts for any systematic uncertainties, but also only provides a lower limit on the total energy due to the uncertainty of the low-energy cutoff of the bremsstrahlung spectrum. Integrating over the 10 minute impulsive phase of the flare revealed that the total energy deposited in the chromosphere was >2x1031 erg.

The associated response was measured in the free-bound continua of H I (Lyman), He I and He II, plus the emission lines of He II at 304A and H I (Lyman alpha) at 1216A by SDO/EVE, the UV continua at 1600A and 1700A by SDO/AIA, and the white light continuum at 4504A, 5550A, and 6684A, along with the Ca II H line at 3968A using Hinode/SOT. The lightcurves of each of these emissions are shown in Figure 2c and the integrated energies are listed in Table 1. The summation of these radiative losses amounts to 3x1030 erg; about 15% of the total nonthermal energy. The Lya line was found to dominate the measured radiative losses. (The EUV energetics for this event were the subject of a previous nugget). 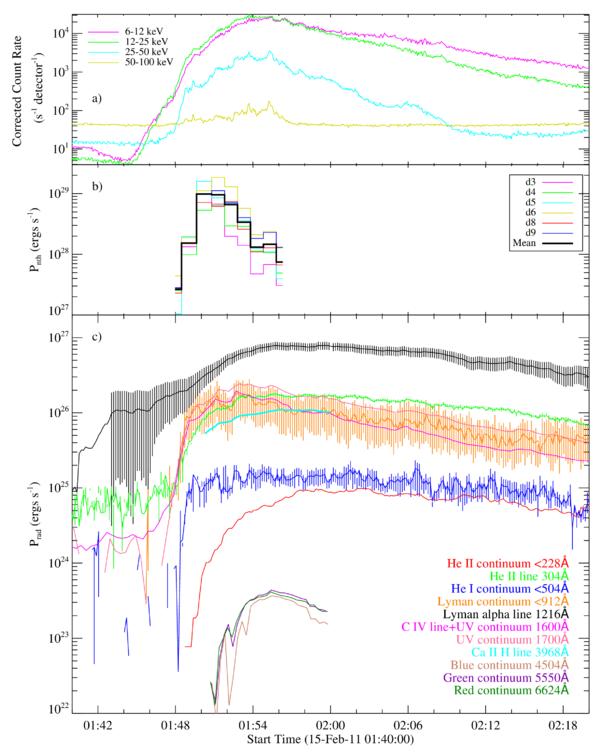 Figure 2: (a) HXR lightcurves from RHESSI. (b) The power contained in nonthermal electrons compiled from individual RHESSI detectors (colored lines). The mean nonthermal power is shown in black. (c) Time profiles of the radiated power of both line and continuum emission form the chromosphere in the optical, UV and EUV.

Plotting these values on a λfλ plot (see Nugget 223) we can see just how sparse our spectral coverage is for the chromosphere, despite this being one of the better observed events.

Figure 3: λfλ plot of chromospheric energetics over the course of the 15 February 2011 flare, with linear (left) and logarithmic (right) y-axes.

Despite the brilliant spectral coverage that was achieved for the famous 15 February 2011 flare, we still seem to be missing a huge portion of the nonthermal electron energy believed to be driving flare emission in the lower atmosphere. Radiative hydrodynamic models, TSI measurements, and stellar flare observations often point to the Balmer continuum as being the dominant radiator during flares, but we are still lacking observations in this part of the spectrum to confirm this in the solar case. The properties of the electron distribution for this event are published in Ref. [1] to encourage the modeling community to try to reproduce the longer wavelength observations, including those not covered, and ultimately, determine the energy transport mechanism. The recent 29 March 2014 flare was observed by even more instruments than the 15 February 2011 event, including IRIS and several ground-based observatories. Perhaps a similar analysis of that event will locate the "missing" nonthermal electron energy.