Where are the flares

In Nugget 99 three months ago, we remarked on the slow development of Solar Cycle 24. In the meantime there has been one pretty good active region (on about July 4!) and it produced one C-class flare, but at the time of writing the question still stands - where are the flares? In that previous Nugget we started with a superposed-epoch analysis keying on the solar maxima over the last five cycles, during which there is modern data. In this Nugget we assume that we have detected the Cycle 23/24 minimum and can key on its epoch, which we take to be December 2008. The evidence for this is in Figure 1 below. An earlier version of this figure appeared in the earlier Nugget, and even newer ones are posted here in (near) real time. 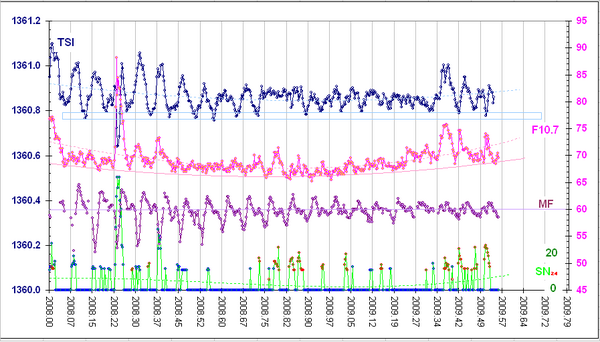 As Figure 1 shows, a burst of activity has just happened - see the blue-green sunspot numbers at the bottom of the plot. The spot group itself is in Figure 2 (left) as cut and pasted from the images on the convenient SolarMonitor Web site; it was the biggest spot group for more than a year, and it produced a C-class flare event as well. It goes without saying that Americans should proudly note its coincidence with the Fourth of July! On the other hand, the right panel of Figure 2 shows a "Stonyhurst" view, as of July 20, of almost the whole solar surface reprojected from the three views obtained by the two STEREO spacecraft and SOHO. The spots have gone, or at least they have not left much of a (magnetic) trail behind, and nothing new has appeared. The right-hand panel of Figure 2 shows a Sun that is essentially undistinguishable from that at solar minimum

We are pretty sure that something unusual is happening and that the Sun is behaving in a manner that is possibly even unique in the existing record. However the gradual upturn in the F10.7 index, our most reliable and quantitative measure of global solar activity, is clear - from a daily value of about 66 solar radio flux units (10-22 W/m2Hz) it has risen perceptibly to almost 70. So there seemingly is a new Cycle 24, but where are the flares?

Where are the flares?

To learn whether the new cycle is starting properly (from RHESSI's point of view, as a flare mission, "properly" means having some nice solar flares to study), we compare with the previous cycle onset. The previous solar minimum appeared at different epochs in the two hemispheres [1], so we have taken each of these epochs and plotted the GOES flare events in the current rise phase relative to those epochs. The results are in Figure 3. The epochs (March 1996 and October 1996 differed by seven months, and the time range overplotted is seven months and 21 days between Dec. 1 2008 and the time of writing. The flares of the current epoch are in red, and the flares of the two earlier epochs are in green. Clearly the burst of activity around July 4th is as it should be, but equally clearly there is a vast difference between the flare occurrences in either of these epochs. This is presumably consistent with the lack of spot activity and so it was expected, but in terms of flare occurrence (the "cracking of the whip" of solar activity?) the differences are striking. 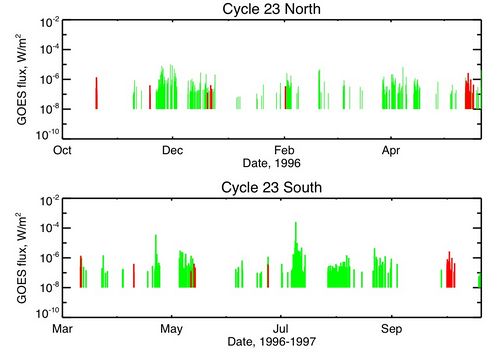 Figure 3: Flare occurrence keyed on the times of solar minimum. Upper, the Cycle 23 northern hemisphere, and lower, the southern.

The display in Figure 3 is the usual logarithmic display used for GOES soft X-ray plots. The lines start at the A1 level and extend up to the flare maximum flux. The "big" flare from Cycle 24 thus far is the C1.4 seen as the tallest red line. By either epoch for comparison, there were many flares of this magnitude in the rise phase of cycle 23. This would be even more striking on a linear plot, but we have used the log plot here because it is more traditional. Quantitatively speaking, there were 50 GOES events in the 231 days of cycle 24 rise phase, and there were either 294 or 375 in the previous cycle depending on which hemisphere one takes as a reference - say about 15% as many flares as would have been anticipated.

Yes, solar cycle 24 is unusual even when we key on cycle minima rather than on maxima. The cycle lengths (minimum-to-minimum) from these epochs are 12.1 years (north) and 12.8 years (south). That makes this cycle the longest in more than a century, and by far the longest in the modern record with relatively objective measures. In fact, since we are only 8 months into the new cycle based on our assumed time of minimum, it could slip further (into 2009) and thus make this cycle even longer. We Nugget-writers will return to this subject for sure!

Retrieved from "https://sprg.ssl.berkeley.edu/~tohban/wiki/index.php/Where_are_the_flares"
Category: Nugget
Facts about Where are the flaresRDF feed