Magnetic reconnection is believed to be the primary mechanism by which free energy stored in coronal magnetic fields is rapidly released during solar eruptive events. Unfortunately, owing to the small spatial scales on which reconnection is thought to occur, it is not directly observable by remote sensing of the solar corona. However, larger scale processes, such as associated inflows and outflows, plus signatures of accelerated particles, have been put forward as evidence of reconnection. Magnetic reconnection is often studied at X-points, the simplest view of the process in two dimensions.

In the case presented in this Nugget, we think instead that the reconnection occurs at a 3D coronal null point (Ref. [1]). This work employs data from many instruments: SDO/AIA, SDO/HMI, the Nançay Radioheliograph and GOES (as well as RHESSI), in a study of the partial collapse of a coronal structure associated with a Type I radio storm (.pdf). We interpret the observations as evidence for accelerated electrons in the reconnection region responding to a gradual fall and rapid rise in electric drift velocity, in response to the inflowing and outflowing field lines at a 3D null point.

Figure 1 shows SDO/AIA observations of the passage of an X-shaped feature from the limb towards disk centre. The X-shaped feature appears to undergo a partial collapse on 6 July 2013 at approximately 09:45. Before this collapse four loop structures are visible in 171 A channel while after the collapse the northern and western segments are no longer visible. 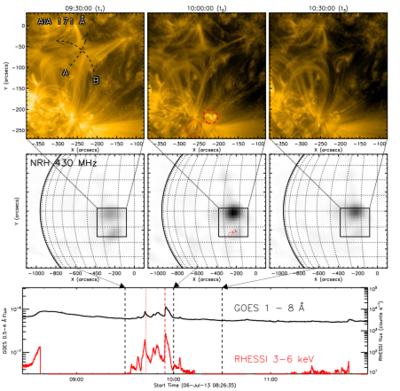 Figure 1: Overview of the collapse of the X-shaped coronal structure. Top: AIA 171 Â images covering the 90 minutes surrounding the collapse. Overlaid on the earliest image are the slices used to generate the timedistance plots shown in Figure 3. Slices A and B are 67 arcseconds and 96 arcseconds long, respectively; the arrow denotes the reference direction for the timedistance plots. Middle: Nançay Radioheliograph 430 MHz images showing the Type I storm source at the times of the above images. Overlaid is the field of view of the AIA images. Bottom: GOES 1-8 Â and RHESSI 3-6 keV light curves, showing the flares that occurred during the collapse. (from [Ref. 1]). 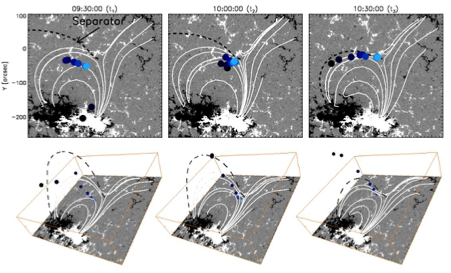 Figure 2: Results from multipole potential field extrapolations based on SDO/HMI photospheric Zeeman observations. Top: Samples of extrapolated potential magnetic field lines (white), viewed from above, overlaid on the HMI line-of-sight magnetogram produced before (left), during (middle), and after (right) the collapse of the 3D null point. Blue filled circles lie on the locations of radio centroids, and the colours match the correlation to frequency. Overplotted onto each frame as a black dashed line is the location of the magnetic separator that passes closest to the radio brightness centroids. The three times were chosen to match those shown in Figure 1. Bottom: The same magnetic field lines and radio sources shown in the top row are shown again, viewed at an angle to represent the 3D structure of the field. The dashed line again refers to the separator. Radio source heights are estimated directly from the "onefold Newkirk model" of coronal density structure.

The Nançay Radioheliograph observations show a Type 1 noise storm associated with this region, with the radio imaging matching the X-shape feature in AIA 171 Â as it rotated across the disk. The NRH observations were further analysed to obtain the brightness temperature and longitudinal extent of the radio source see Fig 3 (bottom). Just before the collapse there is a small decrease in brightness temperature at all frequencies. During the collapse the is a simultaneous sharp rise in all frequencies which is followed by a peak in emission from higher frequency channels which moves to lower frequency channels over the subsequent 10 minutes. The extent of the radio source increases just before the collapse, before decreasing and returning to a similar value as before the collapse. 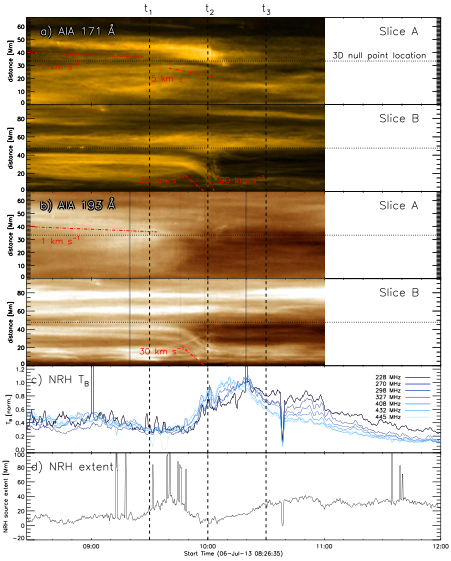 Figure 3: (a) Time-distance plots demonstrating the apparent plane-of-sky motion of brightening in the 171 Â channel along slice A (top panel) and slice B (bottom panel), which are shown in Figure 2. The horizontal dotted line denotes the location of the apparent coronal 3D null point, and vertical dashed lines correspond to the three time intervals used to produce the three panels in Figure 2. (b) Timedistance plots for the 193 Â channel. Overlaid on both time-distance plots are dash-dotted lines indicating approximate velocities of the flow features from which they are offset. (c) NRH brightness temperature, averaged over the area within a 50% contour of each NRH image, for its 7 highest recorded frequencies, smoothed over 6 points, and normalised to clarify local peaks. (d) NRH extent, measured as the linear distance between the centroid of the highest and lowest frequency stable sources, which were 432 and 298 MHz, respectively.

During the partial collapse soft X-ray emission was detected in both RHESSI and GOES. Figure 1 shows time profiles of the GOES 1-8 Â and RHESSI 3-6 keV channels. Additionally RHESSI imaging allowed the source to be localised to a region to the south of the X-shape feature where a footpoint of one of the loops is believed to terminate. Time-distance maps were extracted from the AIA data along to curved segments as shown in Figure 1. Gradual (1 km/s) and fast (5 km/s) inflow phases, as well as fast (30 km/s) and rapid (80-100 km/s) outflow phases were found during the collapse (Figure 3). The reconnection rate can be estimated as MA = VIn/VA ~ VIn/VOut. Using this approximation the reconnection rate was estimated as MA = 0.06.

A solar radio noise storm exhibited a close and consistent association with a quadrupolar transequatorial loop structure for its full passage across the disk. The interpretation of this noise storm as plasma emission produced indirectly by accelerated electrons at a 3D magnetic null point supports the idea that boundaries between interacting or transequatorial active regions are ideal locations for nonflaring reconnection due to their opposite magnetic polarity orientations (Ref. [2]).

Beyond this longterm relationship, we have investigated the behaviour of the radio sources during a rapid collapse of the 3D null point structure, as observed in AIA. We have interpreted the variation in radio brightness temperature as a fall and subsequent rise in accelerated electron population caused by the change in electric drift rate as magnetic fields are swept into and then out of the acceleration region. Our interpretation builds a complete picture of both nonflaring and impulsive reconnection by combining observations of coronal inflows and outflows at 3D null points with an associated signature of accelerated particles (Ref. [3]).

[2] "The reconnection of magnetic field lines in the solar corona"