RHESSI has been operating for over 5 years now and has seen quite a number of flares: the official flare list (thanks to Jim McTiernan) has nearly 11,000 flare from March 2002 to March 2007. Of these, 7,839 are microflares, that is low C- Class to sub A-Class flares, with the name originally denoting events with energies "micro" or a millionth, of a larger flare. RHESSI is especially good at observing these wee events due to its automated shutters. During large flares these shutters are placed in front of the detectors protecting them from the large fluxes of low energy thermal photons but during quieter times they can be moved out, allowing the full sensitivity of RHESSI's detectors to be revealed.

With so many events, there are many nuggets to mine but in order to present a concise nugget we will concentrate on when and where these RHESSI microflares occur.

The first question to answer is how often do these events occur. 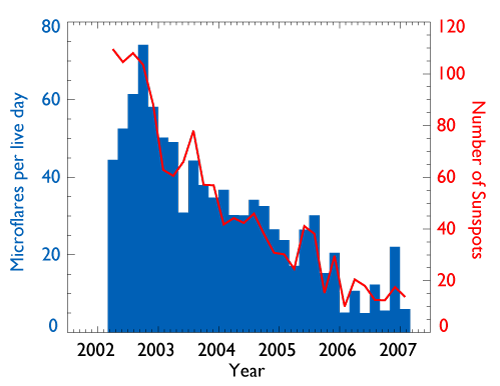 Figure 1: The microflaring rate over the past 5 years of observations. The histogram has been corrected for the times RHESSI was not observing or had the shutter in, hence the rate per live day. The red line and righthand axis indicate the number of sunspots (via NOAA). We can clearly see that the microflaring rate is closely tied to solar activity, with the number of microflares dropping as we approach solar minimum in early 2007.

In Figure 1, we see that the histogram of the microflaring rate steadily decreases from solar maximum to minimum: in 2002 we could expect over 70 microflares per day, but by solar minimum in 2007 be get under 10 a day on average. Also shown in Figure 1 is the time profile of sunspot number over the same time period. Clearly the microflaring rate is tied to solar activity, which is unsurprising. Although over the same period the same is not true for the largest flares (see a previous nugget). Note the discrepancy between the microflaring rate and the sunspot number during the first 6 months is, we believe, due to a combination of using a different strategy as to when the shutters came in and the large number of C, M and X-class flares hiding smaller events.

Where on the solar disk?

The next question is to ask where on the solar disk these events occur. 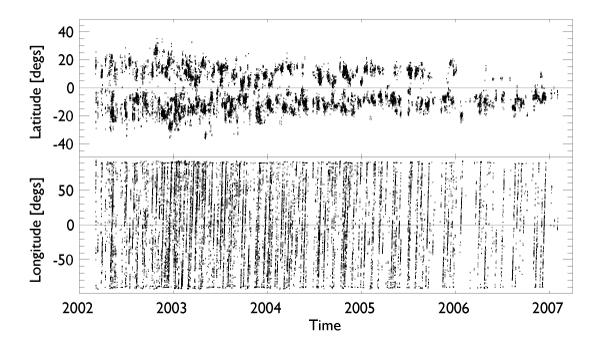 Figure 2: The longitude and latitude positions of all the microflares with trusted positions, over 24,000 events.

Of course with RHESSI we can do considerably more than just the times and positions of these events. We can for instance, investigate the image of the thermal emission, which we take to be 4-8 keV in these events. The resulting loop like structures are important as they give us an estimate of the emitting thermal volume and hence thermal energy. 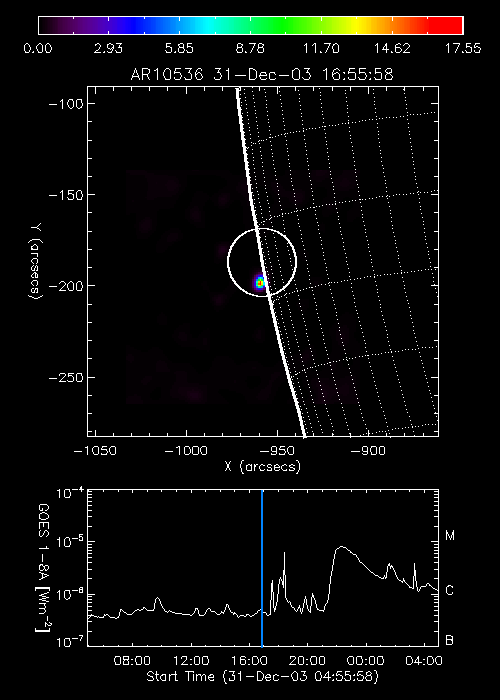 Figure 3: Images, using MEM_NJIT on the 4-8 keV visibilities, for the most prolific microflaring active region RHESSI observed, AR10536. The colour scale changes from image to image, so those with the brighter backgrounds are smaller events. The solid circle indicates the size of the sunspot group and the time profile below the image shows the GOES 1-8 Â light curve for time +/- 12 hours of the microflare. Note that not all the flares as they are either from other active regions or occurred during periods when RHESSI was not observing with shutters out.

In order to quickly investigate the spatial information about so many event we use visibilities (as detailed in a previous nugget). Visibilities allow the spatial structure to be quickly recovered as they make use of the data in the form of a compact set of calibrated data, instead of the full RHESSI un-calibrated time profile. Shown in Figure 3 are the resulting 4-8 keV images using the MEM_NJIT algorithm ( Ref. [1]), for 16 seconds about the peak time in 6-12 keV for each microflare we associated with NOAA active region 10536. We see that some microflares are repeat flaring events from the same loop structure. Others are occurring at different locations throughout the active region, either compact points or large loops reaching out from the active region, with one leg in the sunspot group.

A wealth of information

In this nugget we have shown that RHESSI microflares are closely related to solar activity and are associated with active regions. But this is just one brief aspect of these events.

We have a wealth of information about these events with forward fitting shapes to the visibilities allowing us to investigate the spatial scales of the emission and fitting the spectrum of these events allows us to obtain the temperature, emission measure as well as characteristics of the non-thermal component. Combining all this information allows us to investigate the distributions of both the thermal and non-thermal energies in these events and the implications this has for small flare and coronal heating. Something that will be the topic of a future Nugget......

Iain Hannah and Steven Christe are both members of the RHESSI team at Space Science Lab, UC Berkeley.

Retrieved from "https://sprg.ssl.berkeley.edu/~tohban/wiki/index.php/A_myriad_of_microflares"
Category: Nugget
Facts about A myriad of microflaresRDF feed