What is a "white-light prominence?

A white-light flare, as originally discovered in 1859 by Carrington and Hodgson, clearly shows us the powerful energy release at the onset of a solar flare. In many cases this "impulsive phase" produces most of the radiated energy of the flare, and it also coincides with mass elevation into the corona as the Neupert effect, and further into the heliosphere as a coronal mass ejection.

But the true white-light flare emissions come from the lower solar atmosphere as footpoint sources [1]. In rare cases, one also sees continuum emission from the low corona, and in such a case we call the phenomenon a "white-light prominence." Such a phenomenon can be observed visually as a protuberance above the limb, with a brightness sufficient to be noticeable. Until recently, there has been almost no literature on this topic, although there have been anecdotal reports (for example, a paper on solar gamma-ray observations [2] described an unpublished observations by J. W. Harvey and collaborators, at the McMath telescope, of SOL1980-06-21.

A recent description of the white-light prominence associated with SOL1998-11-22 called such a occurrence "incredibly rare." We pirate their graphics here as Figure~1, noting that it was observed by TRACE and discovered in that database by Harry Warren.

One clear description of such an event appeared in the literature in 1991 [3], and the general interpretation is a fairly straightforward one: intense ablation of the chromosphere during a flare can create dense loops. The electron densities of these regions can be as high as 1012 cm-3. These can drive H-alpha into emission when on the disk, and shine by Thomson scattering in the visible continuum, when projected against the dark sky.

The purpose of this Nugget is to document another example observed only visually, and not reported in the literature elsewhere so far as we know. This event was observed by author Penn, Eric Galayda, Aimee Norton, and Claude Plymate. None of them could find a camera lying around, amazingly enough, and so only visual impressions could be captured:

There are definitely some scientific results in these commentaries, for example the idea that there might be bright points ("maybe 30-50% brighter than the quiet Sun") that might not have been resolved in other observations. Don't forget the large (1.6 m) aperture of the McMath-Pierce telescope, with a diffraction limit near 0.1 arc sec. Also the color remarks ("pale purple" and "blue-ish white, like a fluorescent bulb") call to mind the comparison of Carrington's flare with α Lyrae (Vega). 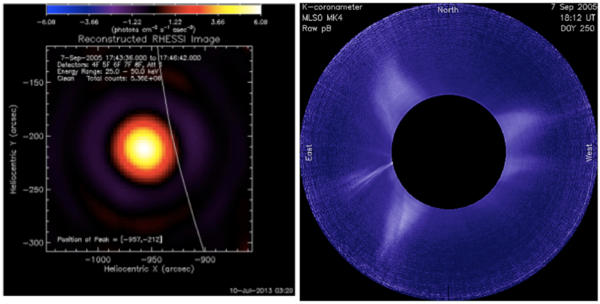 This event adds to our historical knowledge, albeit informal, of white-light prominences. As the Hiei event showed ([3]), though, and Ref. [4] confirmed, one can see these things if one looks for them (for example, in the data from HMI). They are not in fact "incredibly rare", though they do require exceptional circumstances.