Annealing RHESSI for the first time

The RHESSI detectors are high-purity germanium semiconductor diodes, operated in a unique segmented manner (please see our earlier Nugget for more detailed information). All such detectors are sensitive to radiation damage by high-energy particles in space. In RHESSI's low-Earth orbit, the particles are those of the Van Allen belts, and the dosage can be readily predicted. Thus when RHESSI was launched we were aware that the detectors would have a finite useful lifetime. Gradually, as damage builds up, the detector resolution and effective volume drop.

Annealing - accomplished by heating the detector to a relatively high temperature (say 100 C) and allowing it to soak at this elevated temperature (say for a week) can restore functionality. The RHESSI team had always planned this but became more confident as the other Ge detector array, that on the gamma-ray observatory Integral, benefited from routine annealing operations. 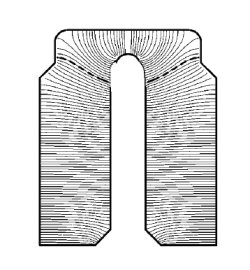 Figure 1: Cross-section of one of RHESSI's cylindrical Ge detectors, showing the general structure of the electric fields in the detector volume.

Figure 1 (above) shows the geometry of the RHESSI detectors, along with the pattern of the electric field within the Ge volume that sweeps out the charge left by a photon interaction. The Sun would be at the top, and the front segment is that part of the volume above the dashed line, the rear segment below. Separate anodes (contacts made in the hollow central region) separately collect the charge from photon interactions the two segments. Radiation damage to the crystal traps moving charges that are part of the signal from a gamma-ray detection, resulting in a partial loss of signal and poorer energy resolution. It also creates permanent charges throughout the detector volume, which can distort the imposed electric field and, when the damage is particularly severe, create dead volumes within the crystal.

After much preparation, the RHESSI team annealed the detectors in November for the first time, almost six years after launch. By this time the radiation damage had built up to such a degree that normal operation, especially for gamma-rays, was rapidly becoming difficult. The operation was worrisome, since the segmentation (see Figure 1) might have been destroyed by the anneal. The Integral detectors are not segmented and do not have this extra risk factor. That was the reason to wait so long for the first anneal, and to keep the temperature up only for a limited period of time (one week at 90 C). The result is shown in the figure below - a success roughly as expected, but not without surprises. The anneal did not restore the full resolution of the detectors, but that is of minimal importance. The main thing is that the sensitivity (volume and efficiency) have returned. 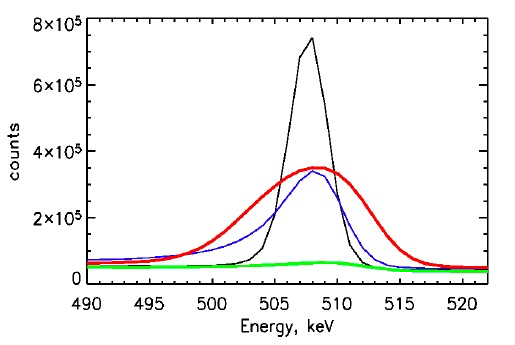 Figure 2: Response of the RHESSI rear segments at the 511-keV line of positron annihilation (a background feature). Green was the situation before the anneal, and red the situation afterwards. The black (initial) and blue (mid-2006) behavior shows that the anneal fully restored the detectors' effective volume if not the original energy resolution. The annealing also restored the front segments to good performance, as shown in Figure 3. Seven individual detectors are shown as separate curves for three solar flares observed in 2005 (left), then just before the anneal (middle), and at present after the anneal (right). Note the disorder and disagreement among the detectors just before (the middle panel) and the good agreement afterwards.

Figure 3: Spectra of three solar flares observed during normal operation (left), just before the anneal (center), and after the anneal (right). These spectra cover the soft X-ray range with a peak at about 7 keV. The radiation damage destroyed the agreement among the 9 detectors (central panel) making analysis very difficult, but the anneal has restored the agreement satisfactorily.

With this successful annealing operation, RHESSI is ready for the energetic flares expected in Cycle 24, which is just beginning (see our earlier Nugget, in particular its Figure 3). We can do it again if need be, and in fact expect to do so as radiation damage again gradually builds up.