During a solar flare, the solar chromosphere undergoes violent disruptions as the entire atmosphere accommodates to a new configuration. Imaging spectroscopy, especially in visible-UV-EUV wavelengths, lets us study the dynamics. Redshifts and red-wing enhancements (red asymmetries) appear in chromospheric lines (e.g., Ref [1]), with a natural interpretation in terms of a chromospheric condensation produced by a coronal pressure enhancement, which results in compression and physical downflow in the chromosphere. On the other hand, blue asymmetries in chromospheric lines have also been reported (e.g., Ref [2]). Some researchers have attempted to explain the origin of these blue asymmetries, but we have not obtained consensus.

In this Nugget, we report extensive multi-wavelength observations of a recent solar flare, which shed some light on this interesting problem.

The moving flare kernel observed by IRIS and DST at Hida

A C-class flare (SOL2014-11-11, in NOAA region 12205), was observed by the Interface Region Imaging Spectrograph (IRIS) and the Domeless Solar Telescope (DST) at Hida Observatory. We observed an interesting flare, specifically a moving emission kernel, using spectral data in the Si IV 1403, C II 1335, and Mg II h and k lines from IRIS and the Ca II K, Ca II 8542, and H lines from DST. See Figures 1 and 2. 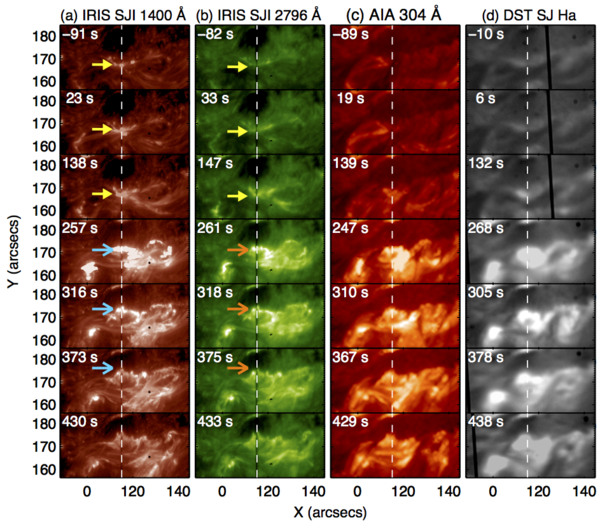 Figure 1: Time series of the flare region. Each panel has a label showing the elapsed time from the start time of the flare at 23:55 UT (2014 November 10). The dashed line indicates the IRIS slit location. In (a) and (b), the bright feature staying at the same slit position is indicated by the yellow arrows. The (a) cyan and (b) orange arrows indicate the position of the moving flare kernel. From (Ref [3]). 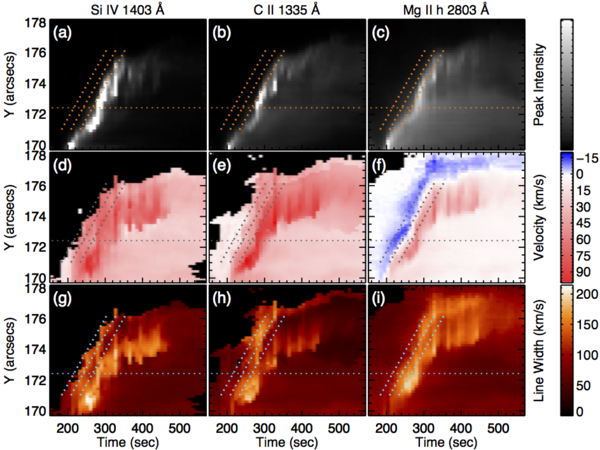 Figure 2: Spacetime plots of (a-c) line peak intensity, (d-f) Doppler velocity, and (g-i) line width of the IRIS lines. Three diagonal dotted lines are drawn at the same space and time on all the panels to compare among different panels and each slope corresponds to an apparent velocity of 31 km/s. The black areas in the panel (d-i) present the regions where the physical parameters cannot be derived due to weak intensity. We also show color bars for the three quantities on the right-hand side. Intensity plots are shown in a logarithmic scale with the lighter color showing the brighter value. From (Ref [3]).

Blue-wing enhancement in the Mg II h and k lines

A large redshift was a common property for all the six lines of Si IV 1403, C II 1335, Mg II h, Ca II K, Ca II 8542, and Hα, but a blueshift prior to it was found only in the Mg II h line. The blueshift lasted for 9-48 s with a typical speed of 10.1+-2.6 km/s, and it was followed by high intensity at a large redshift with a speed of up to 51 km/s. The blueshifted profiles of the Mg II h line showed an intensity enhancement in the blue wing, and a smaller intensity of the blue-side peak (h2v) than that of the red-side one (h2r). These characteristics are the same for the Mg II k line (see Figure 3). 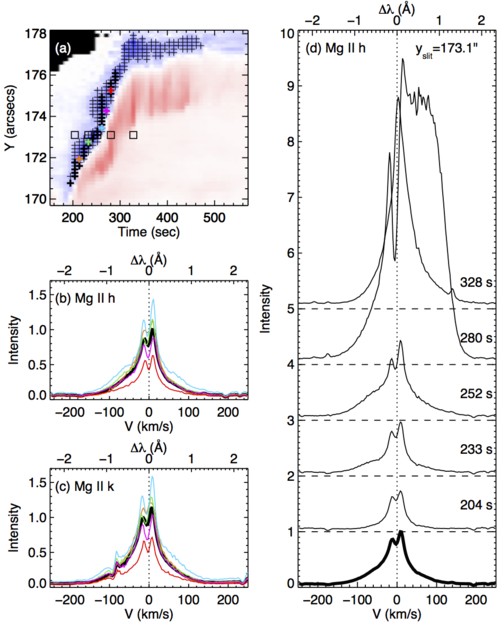 Figure 3: Details of the Mg II lines in relation to the blueshift prior to the redshift. (a) Distribution of the blueshift in the Mg II h line. The background is the same as in figure 2(f). Plus signs indicate the time and location at which the blueshift of the bisector was larger than 5 km/s. Each thick plus sign shows the time when the blueshift reached maximum at each location. Mg II h and k line profiles at the positions of colored thick plus signs are shown in panels (b) and (c), respectively. Each square sign indicates the time and location of each Mg II h line profile in panel (d). (b-c) Thick black line shows the average of the Mg II (b) h and (c) k line profiles at the positions indicated by thick plus signs in panel (a), respectively. (d) An example of the temporal evolution of the Mg II h line profiles at the positions indicated by the square signs in panel (a) (yslit =173.1). Time goes from bottom to top and the times are shown except the lowest profile, which is the same as the averaged one in panel (b). In panels (b-d), the vertical dotted lines show the rest wavelength and peak intensity of the averaged line profile of Mg II h is normalized to unity. From (Ref [3]).

A cloud modeling of the Mg II h line suggests that the blue wing enhancement with such a peak difference can be caused by a chromospheric-temperature (cool) upflow. Ref. [3] discusses a scenario in which an upflow of cool plasma is lifted up by expanding hot plasma owing to the deep penetration of non-thermal electrons into the chromosphere (see Figure 4). 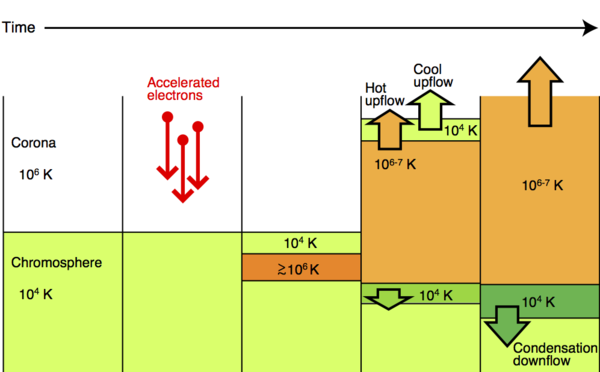 Figure 4: A schematic cartoon of the one-dimensional cool upflow scenario that we discuss in this study. The deep penetration of non-thermal electrons into the chromosphere causes an upflow of the chromospheric-temperature (cool) plasma lifted up by the expanding (hot) plasma, prior to the strong emission in the chromospheric lines from the downward-moving condensation region. From (Ref [3]).

Multi-wavelength observations of chromospheric dynamics, at high resolution, are now becoming available from ground-based (visible) and space-based (UV) imaging spectroscopy. The flare observations discussed here suggest that the vertical motions involved in the "evaporation" flow of chromospheric material into the corona require a complicated temperature structure, with cool material overlying the site of energy deposition.

Retrieved from "https://sprg.ssl.berkeley.edu/~tohban/wiki/index.php/Blue-wing_enhancement_of_the_Mg_II_h_and_k_lines_in_a_flare"
Category: Nugget
Facts about Blue-wing enhancement of the Mg II h and k lines in a flareRDF feed