Footpoint motions and what we can learn from them

A "footpoint" is the intersection of a coronal magnetic loop with the lower solar atmosphere, where the field is anchored. We believe that a solar flare consists basically of a reconfiguration of this coronal magnetic field, accompanied by powerful acceleration of high-energy (even relativistic) particles.

Solar flare electrons are believed to be accelerated in the corona, where the density is low enough that they are not immediately stopped by collisions with the ambient plasma. This property makes their detection difficult, since a lower collision rate will result in fewer hard X-ray photons being produced. However, fast electrons can escape from the corona traveling downward along magnetic field lines. When they reach the denser layer of the chromosphere, their collision rate goes up by orders of magnitudes and they can be seen as strong hard X-ray sources in RHESSI images. If the electrons are accelerated near the top of a magnetic loop, this process will result in the production of two hard X-ray sources at the location of the loop footpoints on opposite sides of the magnetic neutral line.

A simple model for solar flares

Large flares usually do not happen in a single loop system, but take place in a region where the magnetic geometry is more complicated. Often a "loop arcade" geometry can be seen in expanding, cooling post-flare loops by EIT and TRACE. Optical H-alpha observation typically show elongated ribbon structures drifting apart from each other.

This behaviour inspired a "standard model" for the solar flare, shown in this cartoon: 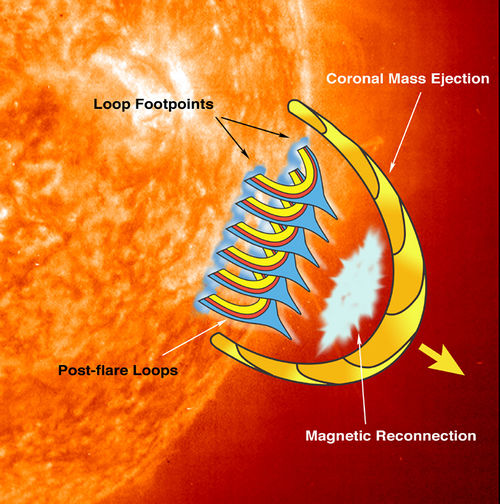 In this model, the rapid eruption of a filament enables the magnetic field to reconnect, driving particle acceleration in the underlying loops. As successive field lines are reconnected at higher altitudes, energy is released in larger loops, whose footpoints are located further apart from each other. In this scenario, one expects that the loop footpoint sources should drift apart from each other, moving away from the magnetic neutral line.

Observations of footpoint sources in an actual flare

On November 09, 2002 13:12, RHESSI observed a flare of GOES class M5 which shows a behaviour that is difficult to reconcile with the simple model given above, and suggests the need for a more advanced model. 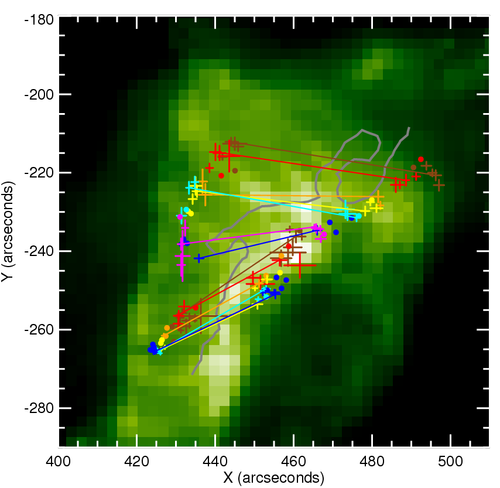 This image shows an EUV image from the EIT instrument on board the SOHO solar observatory with a post-flare loop arcade viewed from above. The positions of the 20-50 keV hard X-ray sources during the flare are shown. The magnetic neutral line under the arcade is shown in gray; this separates the opposite magnetic polarities in the photosphere. The time evolution of the hard X-ray flux and spectral index is shown below:

where different emission peaks are shown in different colors. The same colours are used to display the source positions. 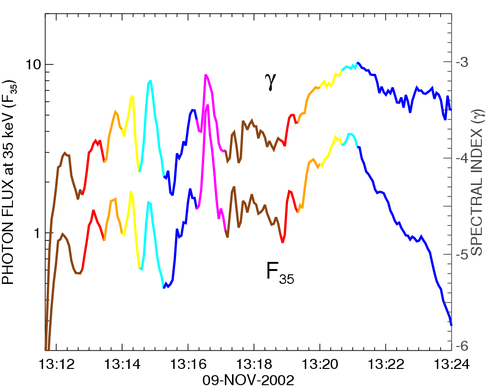 The images show two distinct sources at the opposite sides of the neutral line, corresponding to the footpoints of the loop aracade. At the beginning of the flare, the footpoint sources lie on the upper part of the image, and as the flare evolves, the sources move downward, parallel to the arcade (and presumably along the H-alpha ribbons, for which we have no observation).

One can notice several emission peaks in the time evolution, each showing the well known soft-hard-soft effect, corresponding to different energy release episodes in the flare. They are distinct in time and location. A detailed analysis of the positional data for all the emission peaks showed that in average there is no significant drifting apart of the footpoint sources during a peak.

The study of the motion of the footpoint sources during a flare can yield clues on the behaviour of the acceleration mechanism. Events like the one shown here are difficult to explain using translation invariant two-dimensional models like the one shown in the cartoon.

Biographical note: Paolo Grigis is working on his PhD thesis at ETH Zurich in the group of Arnold Benz.

Retrieved from "https://sprg.ssl.berkeley.edu/~tohban/wiki/index.php/Footpoint_motions_and_what_we_can_learn_from_them"
Category: Nugget
Facts about Footpoint motions and what we can learn from themRDF feed