Electron Beams in the Chromosphere 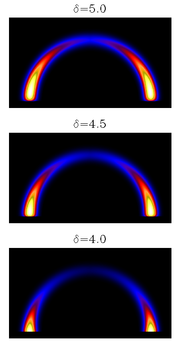 Figure 1: A model illustration of HXR emission, showing thick-target interactions in a semicircular magnetic loop. From top to bottom, the injected spectral index drops from 5 to 4, which results in an apparent descent of the locus of peak emission.

Solar flares almost universally involve hard X-ray bursts, which many Nuggets in this collection have discussed. These bursts are detected via bremsstrahlung, which contributes only negligibly to the slowing-down of the fast electrons that produce the radiation. Accordingly, a much larger amount of energy may remain undetected directly. This realization led to the most widely-used model used to interpret solar flare hard X-rays (HXRs), the collisional thick target model. In this model, a population of electrons is accelerated in the corona; an electron beam forms and propagates down to the chromosphere where the energy can be lost their collisions. The HXR bremsstrahlung appears during this interaction.

However, there remain a number of predictions based on this model which have yet to be observed. One example is that of HXR source motion in response to variation in the spectrum of injected electrons; as a beam 'hardens', the bulk of HXR emission should descend, especially at low photon energies (Figure 1). Such a spectral evolution is normal: it is the "soft-hard-soft" pattern in which the peak of the hard X-ray burst usually has the hardest spectrum. In this Nugget, we outline an attempt to make an observation of this previously unseen phenomenon: the height variation of the HXR centroid during the burst evolution.

As this effect should be most easily observed at low photon energies – where thermal X-rays usually dominate the spectrum – we need to look at a specific type of flare. The best candidates are known as "early impulsive" events. In these events, little plasma preheating may take place, and so, early on, the spectrum should be dominated at almost all energies by nonthermal bremsstrahlung. One such event (already described by its discoverers; see Ref. [1]) is the event SOL2002-11-28.

As shown by RHESSI observations in Figure 2, this event did exhibit unique source motions. A source initially appears at the apparently looptop, splits into two, and descends down both legs of the loop until the two parts reach the footpoints, around the time of the peak in HXRs. Spectral analysis of this event tells us that over this time interval, the index of the injection spectrum also drops from ~5 to ~4, consistent with the commonly-observed spectral hardening seen in the early phase of a flare. The spectral analysis also shows that a very strong nonthermal component, and so the images are expected to reflect the behaviour of thick target emission. This is the advantage of an "early impulsive" event, since the bright thermal X-ray sources have not yet appeared. 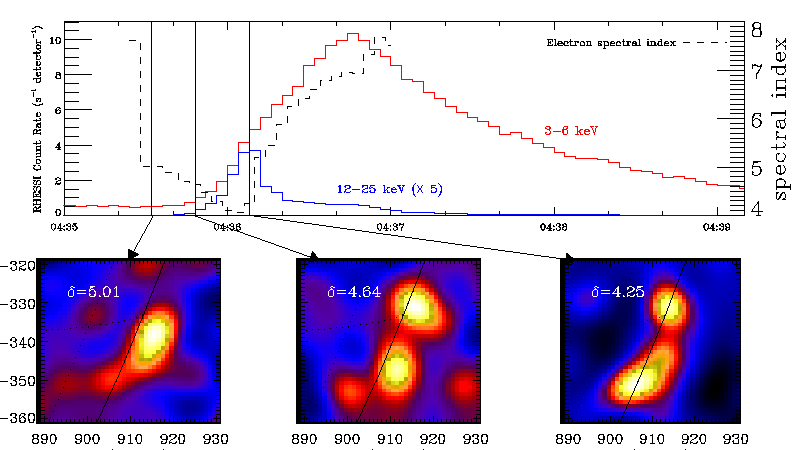 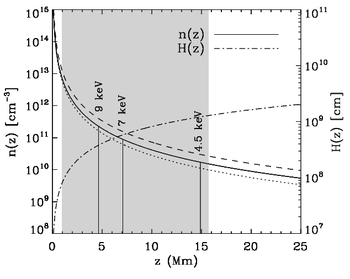 Figure 4: Density and scale height models required to match our model to the observed descending sources. The range of observed source heights is marked by the shaded region, with vertical lines denoting the approximate stopping depth of electrons in each of the modelled energy bands.

In order to understand this observed descent, we used a standard collisional model of electron beam propagation. This model allowed for a ready comparison between the expected location of HXR peak emission, and to the observations made by RHESSI (Figure 3). Because only collisions were taken into account, the only assumption required in this modelling process is the density distribution of the chromosphere. In order to explain the difference in descent rates between each photon energy, a variable scale height was required. This resulted in a density structure which was in agreement with previous studies (Figure 4). 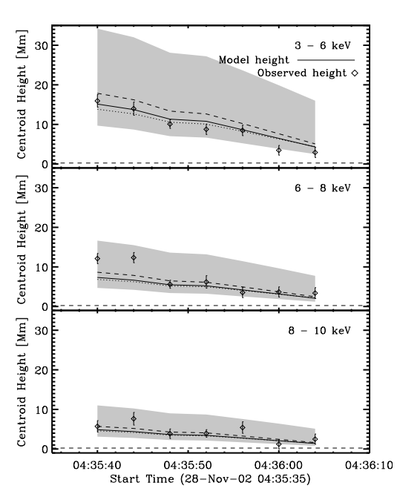 Figure 3: Observed and modeled source heights during the increasing phase of the early impulsive burst of SOL2002-11-28. Note the systematic apparent downward motion.

Closer to an Answer

Analysis of this event has allowed us to finally verify a prediction of the collisional thick-target model which had previously not been observed. This observation is consistent with flare models that require a beam of electrons propagating from the corona to the chromosphere. Alternative models exist, such as those which take into account transport of energy via Alfvén waves originating in the corona, and studies such as this one are vital in trying to understand which mechanisms are at work. The observations presented here can be used in future tests of these more recent theories. For a much more complete discussion, please see the full paper (Ref. [2]).