Exact measurements of the shape of the Sun have a history extending well back into the 19th century (for full details, see reference [1]), and RHESSI is playing a small role in this continuing history (see two earlier nuggets (a, b) thanks to the three small, simple optical telescopes it uses for solar aspect sensing. These observations are serendipitous, as are those of SOHO/MDI and soon those of SDO/HMI. Other dedicated space observatories are being actually designed for solar global observations, and we expect that these will make definitive measurements over the next few years. In related fields we note the tremendous success of the photometry/asteroseismology missions MOST, Corot, and Kepler.

The purpose of this Nugget is to show off some of the historical overview from [1], and to remind Nugget readers of the basic physics of the oblateness measurement. RHESSI has just completed its observations through the remarkable recent solar minimum and we see no particular reason why its data should not continue well into the operational lifetimes of SDO and Picard.

Why is the oblateness interesting?

Astrometry is one of the classical branches of astronomy, and precise determinations of the shape of the Sun make use of highly specialized techniques with similar fundamental problems of measurement. The oblateness of the Sun is normally defined as the (normalized) difference between equatorial and polar radii, and so it is a differential measurement as opposed to the absolute determination of the radius (or diameter), which is obviously much harder. The RHESSI, SOHO, and now SDO measurements cannot be regarded as absolute and are restricted to shape alone, but we look forward to optimized and more direct measurements that can precisely determine the radius as well as the shape. 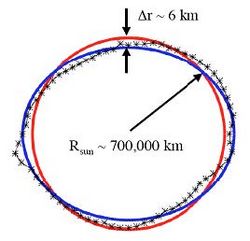 Figure 1: Cross-section of the Sun through its rotation axis, showing its basically circular shape (red) with a small distortion induced by the rotation (blue). The radial scale has been magnified enormously as indicated. The points show actual RHESSI data as described in the text.

The shape of the Sun, or any star, reflects what is going on inside it. Most trivially it is rotating, and so an equatorial bulge should appear. This would be the main source of non-circularity sketched in Figure 1. The Sun rotates slowly, and so this bulge is small (by one prediction, 7.98 mas, where the common unit mas is a milli-arc-sec, or closely 1 part per million of the full radius). More rapidly rotating stars can have substantial bulge, which leads to the interesting effect known as the von Zeipel theorem which implies that there is also a substantial dimming of the surface brightness at the equator of such a star. In the case of the Sun both rotational ellipticity and rotational dimming are tiny and therefore a wonderful challenge for observers.

Many other potential mechanisms could change the shape of the Sun. The surface is known to rotate differentially in the sense that the equator region has an angular velocity greater than the polar regions. There must be internal differential rotation as well, although it is increasingly well constrained by helioseismology, and what we see at the surface may conceal mass internal mass distributions that can affect the shape. Such effects are related to tests of relativity theory, from which Einstein famously explained the anomalous perihelion precession of Mercury. The observation of this precession was an amazing coup of 19th-century astrometry. Finally there are links to the solar cycle; for example a north-south meridional circulation is required to explain the 11-year cycle - a hot research topic nowadays because of the recent anomalous minimum. This could well have detectable effects at the surface of the Sun other than the subtle motions of magnetic elements that trace out the flow associated with the cycle.

A history of the measurements 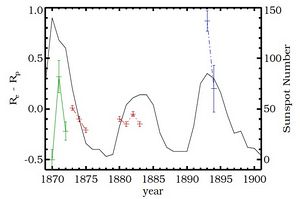 Figure 2: Early measurements of the solar oblateness, using both photographic plates and heliometers. These early researchers were interested in the relationship between the oblateness and the phase of the solar sunspot cycle, a question remaining open in spite of the great improvement in measurement accuracy since the 19th century.

Early measurements of solar oblateness used the classical techniques of astrometry such as the measurement carefully exposed photographic plates, or visual observations through transit measurements or via heliometers specifically designed for this purpose. The precision of such measurements (see Figure 2), although well below an arc second, is far from what is known now to be necessary, but that did not keep the observers from speculating about the apparent variations (all due to measurement uncertainty) that they detected - the solid line in Figure 2 compares the observations with the sunspot number. The astrolabe can also be adapted for measurements of the solar diameter, and can be instrumented with modern detectors as well. The modern era of solar oblateness measurements can be said to have begun with Dicke, who wished to make measurements sufficiently accurate to test rival theories of general relativity. Dicke's ground-based telescope contained several innovations designed to make the measurement differential in nature and as immune as possible to "seeing" conditions. The device largely succeeded in this, especially after it was moved from Princeton, New Jersey, to a better site in California. It also inspired other instrumental development.

Systematic observations of solar oblateness now continue from ground-based observatories, and the measurement errors have dropped to the order of one mas (milli arc sec, or about a part per million). The new era, as mentioned, began with the observations of Dicke & Goldenberg as reported in [2], but these data were quickly superseded by superior observations, also ground-based. Figure 2 shows how the error bars dropped during this intermediate period of observation, roughly speaking from 1960 to 1990 (see [1] for details of the individual data). 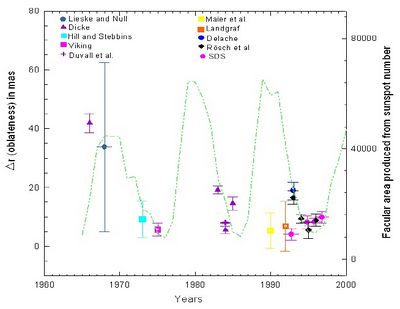 Figure 3: The intermediate period of specialized, modern ground-based observations of solar oblateness. The first point on this graph was the revolutionary observation of Dicke & Goldenberg, as reported in [2]. 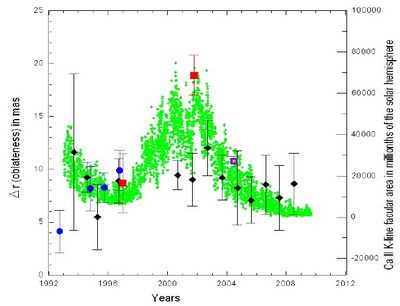 It has now become possible to do observations from balloon-borne platforms and from actual satellites in space. Because the measurements require such great precision, general-purpose solar telescopes are not very useful for oblateness measurements in general, although any full-disk image can be analyzed for its astrometric content. Thus the observations reported from SOHO/MDI and soon, we anticipate, from SDO/HMI, are lineal descendants of the astrometric plate reductions shown in Figure 1. Nowadays of course the plates have been replaced by CCDs.

The RHESSI observations [3] presently hold the record in terms of precision, with an oblateness uncerainty of only 0.14 mas. This has been possible because of a fortunate and accidental imitation of one of Dicke's great ideas: to have the telescope rotate rapidly. By this artifice many systematic errors become more tractable, since the rotation allows the observer to study deviations from a circular shape almost directly. The lowest-order deviation is the oblateness term, but as mentioned in the Introduction we fully expect that more precise measurements will reveal higher-order shape terms. Figure 4 shows the single RHESSI data point, but it is hard to spot at first because of its small error bars. Eventually we hope to have a full time series of comparable data, extending at least from 2002 to the time of writing (2010). Other notable data from the current epoch include a continuing series of high-precision measurements from Pic du Midi, shown as lozenges with error flags in Figure 4. The green points in Figure 4 show solar activity, but in terms of the facular index rather than sunspot number.

The RHESSI data, as plotted, show an apparent oblateness greater than 10 mas. As described in [3], this appears to be the result of solar magnetic activity in the form of faculae and enhanced network; the elimination of this contaminating signal brought the apparent oblateness down to the level predicted for uniform rotation. This result needs confirmation, which we hope to have soon both from RHESSI and from other space missions as well as the ground-based observations.

The measurement of solar oblateness has a rich history and a some profound implications touching on relativity theory, for example. RHESSI is making its contributions to this history [3]. The shape of the Sun is one of the ways we have now for peering into its interior and learning empirically about flows and motions there that would otherwise only be guessed from theoretical considerations. The paramount of these techniques is of course helioseismology, a technique now being extended to the stars.

[1] A brief history of the solar oblateness. A review