It is still unexplained why the solar corona (about 1 MK) is so much hotter than the photosphere (about 5700 K). While it is clear that this energy comes from the Sun's magnetic field somehow, rival conversion mechanism(s) are still much discussed in the community. The solar flare mechanism is one of the most promising candidates, since a flare converts large amounts of magnetic energy into other forms. Most energetic flares are, however, too rare to explain the steady supply of energy to the corona, which maintains its high temperature even during solar minima, when no extreme solar activity takes place. It has been debated that the flares on the smallest scale might supply enough energy not through their (relatively small) individual energy budgets, but through their large numbers. Numerous studies have shown that solar flares follow a power-law distribution as a function of energy, with the power-law index fluctuating around 2. It is this value that divides the two regimes (Ref. [1]): for index <2, the largest flares contribute more to coronal heating; for index >2, the smallest flares are the main contributors. Parker (Ref. [2]) had proposed the scenario where nanoflares (with energies of 1024 erg or less) make an ensemble of unresolved basic reconnection events that occupy the whole solar disk and thus make up the X-ray corona.

NuSTAR is a focusing-optics hard X-ray telescope operating in the energy range 3-79 keV and launched by NASA in 2012. Even though it was not designed for solar observations, it can be pointed to the Sun. This capability has led to 12 brief solar observing sessions in the last 3.5 years, which have resulted in observations of active-region "microflares," quiescent active regions, high altitude coronal emissions, etc.; a microflare is just a weaker version of a true solar flare.

In the July 2016 and March 2017 observing campaigns NuSTAR also observed three tiny flare-like brightenings in the quiet Sun (QS). These observations, to the authors' best knowledge, represent the first spectroscopically resolved X-ray measurements of QS flare events in hard X-rays (HXR). They were associated with the solar magnetic network and, even though feeble when compared to larger M- and X-class flares, they showed complex morphologies. 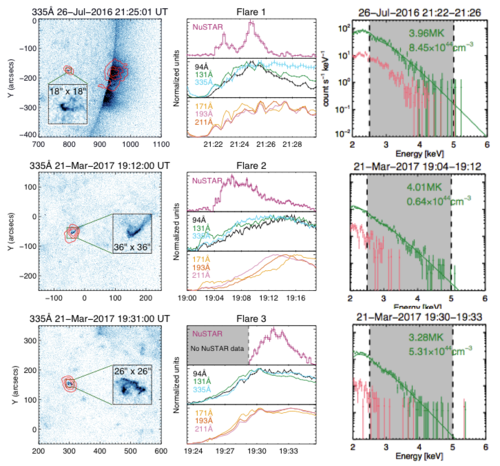 Flare-integrated spectra were made for each event, using a spectral model consisting of an isothermal component plus a fixed background. The fits provided temperatures in the range 3.1-4.2 MK and emission measures in the range (0.6-15) x 1044 cm-3. These values give thermal energy contents in the range (1.8-6.0) x 1026 erg and place the observed events (brown box) just between the usual microflares observed in active regions and smallest QS flares observed previously in soft X-raus and the EUV (see the left panel of Figure 2; the brown box shows the NuSTAR events). The same story is shown in the right panel of the same figure in the parameter space of temperature and emission measure, where the RHESSI observation range is shown in yellow, NuSTAR AR microflares in blue, NuSTAR QS flares in orange, while the faintest events in the soft X-rays and the EUV observed previously (e.g. Ref. [3]) are shown in green. The same classes of events in the two plots are highlighted with arrows. In the GOES classification, our events occupy the range between 1/1000 and 1/100 of a GOES A-class event, the weakest classification. The spectra did not show direct signs of a nonthermal component. However, since upper limits of energy in a hidden nonthermal component (still consistent with the observations, i.e. no emission above 5 keV) estimated at ~5 x 1026 erg are within the uncertainties of thermal energy estimates, and the non-detection of the nonthermal signal is not a constraining result.

A fuller account of this work is in Ref. [4]. With the decreasing solar activity towards solar minimum in 2019/2020, we expect progressively better conditions for NuSTAR QS observations. We expect higher livetimes and even lower backgrounds in the future runs, which should allow for observations of even smaller events; we estimate improvement of a factor of about 70 in sensitivity.

[2] "Nanoflares and the solar X-ray corona"