The RHESSI view of a solar flare, via hard X-rays and gamma-rays, is quite direct in one sense, but quite indirect in another: these radiations can only come from a dense target medium. This basic problem means that model understanding of the high-energy emissions must include an understanding of the particle transport. Specifically, one cannot "see" the acceleration site if it has low density, which might be an important requirement for a successful theory of particle acceleration in a solar plasma atmosphere.

By contrast, gyrosynchrotron radio emissions do not require the presence of a dense target medium. Instead, the emission process requires the existence of a magnetic field, of course, but the distribution of magnetic field and plasma have very different equilibrium processes. For plasma or gas, hydrostatic equilibrium can dominate; at a minimum the solar atmosphere typically has a dense chromosphere and a tenuous corona. Where the magnetic field dominates, on the other hand, the equilibrium condition would be essentially an isobaric one (a smoothly varying magnetic pressure, a state that could be termed "isomagnetobaric"), where only the Maxwell stress tensor should define the large-scale structure. Recall that we believe these flaring regions to have low plasma beta, i.e. that magnetic pressure dominates gas pressure. This means that the gyrosynchrotron emissivity, all else being equal, will have a smoother distribution in space than (say) the hard X-ray emissivity.

What does this imply for an observable, such as the polarization pattern, of a coronal magnetic structure containing fast electrons? We have thus carried out numerical experiments [1] using the GX Simulator software package [2], finding that interesting specific signatures may appear. New microwave polarimetric imaging facilities such as E-OVSA (see also our earlier Nugget) and Mingantu are now appearing, and our experiments suggest that the polarization patterns will be informative about not just the energy-loss domains (hard X-rays) but possibly also the acceleration regions of high-energy particles.

These simulations consist of analytic approximations to the behavior of a specified particle population in a fixed magnetic geometry This is far from realistic in the sense that it does not describe the dynamics of energy exchange between particles and field, which we know to be important in the flare process. One could also study the polarization distribution in more complete models, but the present ones serve to illustrate at least one interesting conclusion (described below). Our magnetic model follows that designed by Titov and Demoulin [3] in a commonly-used description of non-potential magnetic field structures in the solar corona. 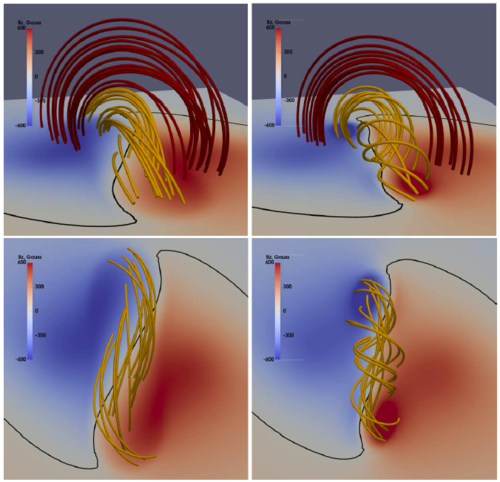 In these models the fields colored in magenta are the "strapping" fields introduced to confine the twisted structure via the magnetic tension, one component of the Maxwell stress tensor. The gold field domain connects opposite polarities across the photospheric neutral line (the line defined by the locus of zero vertical field component) and carries a current to generate the twist. We imbed the particle fluxess in these structures, specifying pitch-angle distributions (relative to the direction of the magnetic field), plasma properties such as density and temperature, and particle sources. Then we "turn the crank" on GX Simulator to see what happens. 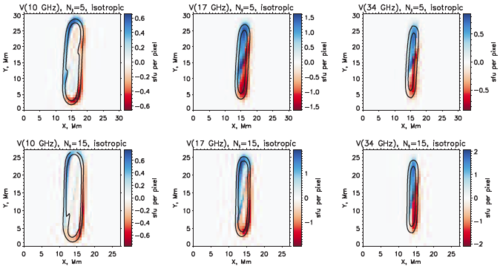 Figure 2: Results of GX Simulator runs on the fields described in Figure 1, with particle inputs as described in [1]. The alternation of polarization sense clearly appears, correlated with the twist of the flux-rope model.

The advantage of these numerical experiments is that one can vary the parameters, which one cannot do with observations - we observe only what Nature gives us, and sometimes not very well! Thus one can make possible discoveries in the simulations just as one can make discoveries in real observations. These need to confirmed by theoretical and observational work in any case, but the initial germ of discovery may be in one of these numerical experiments.

The main conclusions from our paper [1] reads as

This experiment predict slanting lines of polarity inversion that cut across the flux-rope structure, which may or may not be recognizable in direct images. Beyond this greater complexities can be imagined and explored with experiments of this type.