RHESSI has now been observing for nearly eight years. How have the detector sensitivities changed since it was launched? To characterize this important detector property we use a method and software devised by Brian Dennis and Kim Tolbert. This is based on fitting a simple thermal spectrum, for which there are two free parameters, to a given flare observation near the peak time. The parameters are temperature, T, and emission measure, EM. We do this first for detector 1. Next, thermal components are fit to the spectra for the other eight detectors, with T fixed at the value found for detector 1, T1. This gives us a measure of the relative sensitivity of the detectors.

We want to do this calculation for as many flares as possible. Here we chose every flare on the RHESSI Flare List which was observed with no attenuators, no particle events, no data gaps, with the spacecraft at low geomagnetic latitude, and at least 5 minutes from the SAA. These are all technical matters details that might bias the results of the cross-calibration and thus make it less precise. In addition to the flare interval being "clean" in this manner, we also require that the 12 second time intervals before the flare start time and after the flare end time be "clean", so that we can use those times to calculate the background level. This process resulted in a sample of 10,661 flares. Spectra were fit for each flare for the same time range that was used to find the flare position. This time interval is usually an interval of 2 minutes or less (depending on flare duration) at the flare peak in the 6 to 12 keV range. The spectra were assumed to be isothermal, and fit for the energy range from 6 to 20 keV, using an energy resolution of 1/3 keV.

Not all of the flares were fit successfully for all detectors; flares which did not have count rates that were more than 3 sigma above the background level in more than 2 channels were discarded; flares for which the calculated EM was less than 1043 cm-3 were discarded; flares with background-subtracted count rates totaled over the 6 to 20 keV range which were less than zero were discarded. These tests were applied for each of the detectors 3, 4, 5, 6, 8, and 9. Spectra from detectors 2 and 7 have been ignored, since those detectors have reduced energy resolution in the 6 to 20 keV range.

The full sample contains 7,740 flares, from the start of the mission until 1 November 2009. 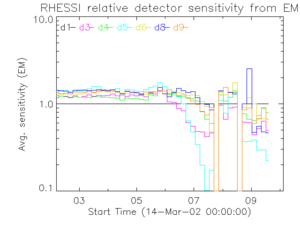 Note that the relative sensitivity of all detectors seems to be greater than unity for the early part of the mission. This may be a systematic effect resulting from holding the temperature fixed at the level found using detector 1 for each of the detectors, i.e. that something about detector 1 leads to a biased temperature value. This possibility is being investigated.

What about absolute sensitivity?

For each flare we also measured GOES flux averaged for the spectral interval. We expect that the GOES detectors are less susceptible to decay then the RHESSI detectors, which suffer from radiation damage. For most of the flares GOES 10 data were used, but there are gaps in the GOES 10 coverage, so there are flares with GOES 11 and 12 data included. (It turns out that even if non-GOES 10 flares are discarded, we come to the same overall conclusion.) Figure 2 shows 60 day averages of the ratio of RHESSI detector 1 emission measure to GOES fluxes for the full sample, which should show the variation of the relative sensitivity of detector 1 to GOES. Since we see that the other detectors lose sensitivity, we expect that detector 1 should lose some sensitivity, but it seems to gain sensitivity relative to the GOES detectors. How is this possible?

It turns out that there are some effects that are not being accounted for. Figure 3 shows the GOES high-energy, short-wavelength channel flux versus RHESSI detector 1 EM for the full sample. We expect correlation between these two quantities, considering that both instruments are observing X-rays, but with different energy ranges; the GOES energy response is weighted towards energies less than 6 keV, while the RHESSI energy response is small at these low energies and increased at higher energy, where GOES is insensitive. Also the correlation depends on the shape of the observed photon spectrum, which here is assumed to be due to an isothermal source. We are fairly sure that flares are not isothermal (Ref. 1), and this non-isothermality may be responsible for some of the scatter on the plot.

There is correlation for relatively large flares, but there is quite a bit of scatter, and for small events, there is no correlation at all. There is a lower limit for GOES, and there are line-like structures in the GOES fluxes which show the effects of digitization in the GOES data. We expect that some of the scatter is due to lack of background subtraction for the GOES data. (Background subtraction for GOES will be included in the next iteration of this project.) This will be a smaller effect for larger flares. Also we may hope to reduce scatter by comparing GOES flux to RHESSI count rate, rather than EM since there is one less level of data processing involved. So for the comparison shown in Figure 4 we restrict the number of flares by only taking relatively large flares, with EM > 1045 cm-3, which is the value below which the correlation between flux and EM disappears. This leaves 2,580 flares. Also we will compare GOES flux with RHESSI count rate, instead of EM.

Once we have made these changes, we get a good correlation, as shown in Figure 4. The red dashed line shows a linear least-squares fit to the data with a slope of 0.55. There is still scatter; we expect that this will decrease when the GOES background subtraction is included. If we plot the 60-day averages of the ratio of RHESSI detector 1 counts to GOES flux for this flare sample, we obtain the results shown in Figure 5. Note that the error bars in both Figures 2 and 5 are calculated using the standard deviation of the mean of the ratios in each time bin, which is the standard deviation divided by the square root of the number of flares per time bin. There are more flares per bin during the early part of the mission (typically 100 flares/bin) than later (often less than 10 flares/bin); thus the error bars are smaller earlier in the mission. Also there are now three data gaps, one for annealing, and two due to lack of activity.

In Figure 5 the variation of RHESSI counts with respect to GOES flux is much less than the variation shown in Figure 1. The level now looks relatively constant. There is no evidence from this plot that RHESSI detector 1 has lost or gained sensitivity with respect to GOES. It is also probable here that subtracting the GOES background for each flare will affect these results. This will be addressed soon.

How does the sample change affect the original plot? 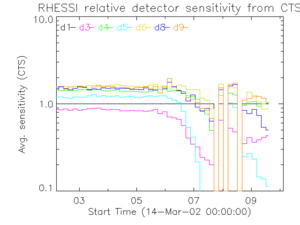 Using only relatively large flares in the sample, and using count rate rather than EM for the comparison has a small effect on the relative sensitivity plot, as shown in Figure 6. Except for the fact the the detector 3 curve is less than one at the start of the mission, and the odd large value for detector 8 near the end of 2008, not much has changed.

Detectors 3, 5, 6, 8, and 9 lose sensitivity relative to detector 1, especially in 2007. Some of that sensitivity is regained by annealing, but it is currently decreasing again. We will be able to anneal the RHESSI detectors again, and expect as before to restore at least part of their original performance, but we want to do this at the optimum time. This calibration exercise will help us to understand when that time will come.

There is no obvious loss of sensitivity in detector 1, relative to GOES. It seems odd that the other detectors can lose sensitivity, so why not detector 1 as well? The next step for this work is to try to subtract pre-flare background for the GOES flare results. Watch this space for updates.

Here are what the results look like when you do subtract GOES background. As a first step, we subtracted pre-flare background values from the GOES fluxes before comparing to RHESSI count rates. For each flare the pre-flare background time interval used is the same as the pre-flare interval found for the RHESSI spectra. (Note that this is slightly different than the background subtraction process for RHESSI, which included both pre- and post-flare background levels and interpolated. Since GOES flares tend to last longer than RHESSI flares, we are concerned that using both the pre- and post flare intervals calculated from RHESSI data may give inaccurate results.) It turns out that only 2055 flares had excess background-subtracted GOES flux. The results for this sample are shown in Figures 7 and 8. In Figure 7, the scatter in the plot of GOES flux versus RHESSI counts is much less than that in Figure 4, as expected. The red dashed line is a least-squares fit to the data, with a slope of 0.86.

In Figure 8, which shows the variation of the ratio of RHESSI counts to background-subtracted GOES flux, the relative sensitivity finally shows a decrease. Relative to GOES Hi, RHESSI detector 1 loses about half of its sensitivity by the annealing in November 2007. This is shown a little more clearly in Figure 9, which normalizes the ratio to be 1 at the start of the mission. As in the other figures, sensitivity increases after annealing (first datagap), has been decreasing since, and is now at a level of approximately half of the original sensitivity. 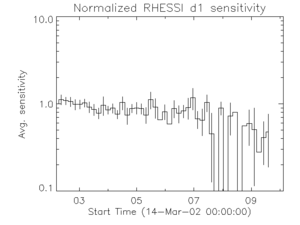 Figure 9:This is the relative detector 1 efficiency normalized to be 1.0 for the first 60 days of the mission, using background-subtracted GOES fluxes for the comparison.

There is now an obvious loss of sensitivity in detector 1, relative to GOES, which we find by including pre-flare background subtraction for the GOES flare results.