The Van Allen Belts were discovered in 1958 with data from Explorer 1, a forebear of RHESSI which is also an Explorer class satellite. The existence of this intense radiation was a surprise; people knew that there were "forbidden zones" into which galactic cosmic rays could not penetrate, and yet parts of these zones were loaded with similar particles. This discovery launched the field of space plasma physics and many subsequent satellites. The original mathematics explaining this phenemonon are quite complicated and were originally worked out by Karl Størmer

The key theoretical problem is that the magnetic force on a charged particle is proportional to B and is perpendicular to both the particle's velocity vand to the local magnetic field B. Thus to a first approximation no cross-field motion is possible - the particle just gyrates around field lines in a uniform field. A uniform field is probably impossible to achieve, however, and if the gyration orbit of the particle becomes comparable to the scale length of the non-uniformity, then the particle trajectory can include complicated non-adiabatic motions across the field. This is the very complicated mathematical problem that Størmer tackled.

An analogy between the Van Allen belts and the Sun comes from the H. Elliot, whose 1973 cartoon (figure 1) shows the possibility of cosmic-ray-like particles trapped in the magnetic field of the solar corona. This field is not quite analogous to the case of the Earth, since the field is local to an active region. The Sun does not have a dominant Sun-centered <a href="http://en.wikipedia.org/wiki/Dipole"> magnetic dipole</a>. 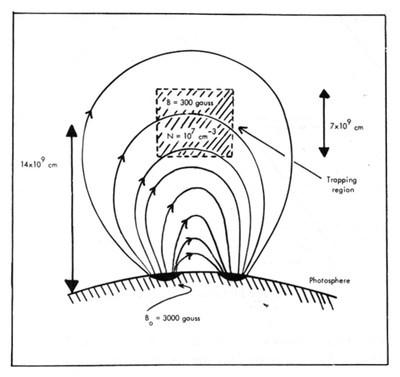 Figure 1: The coronal storage of excess energy by trapped particles (from the cartoon archive.

We are interested in this subject because an earlier Nugget introduced a new source of high-energy particles, CRAND, "Cosmic Ray Albedo Neutron Decay". These particles could seed the theoretical solar radiation belts and the longer these particles remain trapped, the more numerous they become, presumably until their accumulated non-thermal pressure began to rival that of the magnetic field (as suggested by Elliot).

Can the particles be trapped?

The short answer is "yes," since the coronal magnetic field naturally forms a magnetic mirror geometry. During solar minimum (see Figure 2 below) this geometry can achieve near-axisymmetry and thus closely resemble the Earth's field. This implies the possibility of trapping and accumulation of particles for the many months of solar minimum. This effect would thus be on a global scale, not just around a given active region.

Figure 2: Two views of the solar corona. Left, an eclipse image near solar maximum, showing lots of structure. Right, images and magnetic model for a time near solar minimum. Here the dipole term dominates and one could imagine particles drifting right around the Sun via the " second adiabatic invariant.

The model data described in Figure 3 (below) show that the time scales for particle motion are quite long for low-energy particles (10 MeV); at higher energies the drift times will be shorter than the time needed for the collisions with the rest of the coronal gas to kick out particles out of the trap. 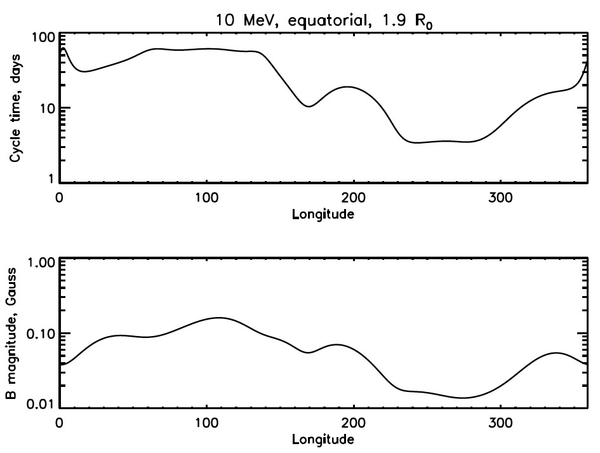 Figure 3: Model time scale (upper) for a particular particle energy (a 10 MeV proton) drifting azimuthally around the solar corona at 1.9 RSun for illustration; the time is for a full circumnavigation. The plot at the bottom shows the total field intensity at this height for reference.

Since trapping definitely seems possible, with such long time scales that the third invariant (azimuthal drift) motion seems to be kind of irrelevant. But where would the particles come from? In the case of the Earth's radiation belts, there are several mechanisms (other than CRAND) that might or might not have a solar analog. Short of flying a spacecraft directly into the solar corona to direct these particles directly, indirect detection seems difficult though not impossible. Low-level radiation from the hypothetical belts might lead to a quiet-Sun signature, perhaps in the X-ray band that RHESSI can detect. Or it may be that there are time-dependent effects of the sort that Elliot originally envisioned. In any case, this new idea is extremely interesting, if only because the particles represent an entirely different way of storing energy in the coronal field, independent of current systems or non-potential field components.

Of course, the solar global magnetic field is more dynamic and complex than the Earth's field which leads to several interesting questions: how do coronal-hole boundaries reflect the particle accumulation? What happens when a CME disrupts one sector of the coronal field? Does the helmet-streamer geometry produce similar "convection" effects to those seen in the geotail?

[1] "Energetic particles as a source of flare energy"

Hugh Hudson is a RHESSI team member based at UC Berkeley, and Alec MacKinnon is a theoretical physicist at the University of Glasgow.