Which are more powerful, flares or CMEs?

Solar flares are the brightenings ("eruptions" in older terms) we see near the surface of the Sun; CMEs (Coronal Mass Ejections) are the huge clouds of gas ejected by the Sun through the corona and into interplanetary space. Soon after the earliest detections of CMEs in the 1970s, the conventional wisdom was that a CME carried far more energy than was released during its associated flare. The biggest flare was thought to release no more than ~1032 ergs, whereas a CME could carry 1033 ergs or more in the kinetic energy of the material ejected from the Sun. Although Lin and Hudson made the claim in 1976 that a flare released enough energy to drive the associated CME, this was never generally accepted, especially after 1993 when Gosling exposed what he called the "Solar Flare Myth." He argued that scientists had been wrong in believing that solar flares were the source of the main effects of solar activity on the Earth and its environs - the magnetic disturbances, the high-energy particles, etc. He showed that these were, in fact, caused more directly by the CME's effects, rather than the flare. The pendulum thus swung in the other direction. NASA's Living With a Star program is predicated on the fact that CMEs are the most important aspect of solar activity affecting the Earth and interplanetary space. Most of the resources are being spent on understanding CMEs, how they are produced, how they propagate to and interact with the Earth, how they accelerate the solar energetic particles. The solar flare has apparently been reduced to a secondary role as a scientifically interesting phenomenon but one of little consequence energetically.

Recent new observations and analysis have suggested that this belief that the CME carries most of the energy may itself be wrong. These observations show that the energy released in a flare is not inconsequential and, in fact, may be comparable to the kinetic energy of the material of the associated CME. The best indication that this may well be the case is the first-ever detection of an increase in the total solar irradiance (a.k.a. "solar constant") made with instrumentation on the SORCE mission (see Figure 1). On October 28, 2003 11:05 the Total Irradiance Monitor (TIM) on SORCE detected an increase in the total solar irradiance at the time of a huge X17 flare recorded by the X-ray monitors on GOES. The estimated total radiated energy during the flare was 4.6 x 1032 ergs with an uncertainty of no more than 50%. The estimate of the CME kinetic energy determined from LASCO observations was 1.2 x 1033 ergs, i.e. much less than an order of magnitude larger than the flare's radiated energy. 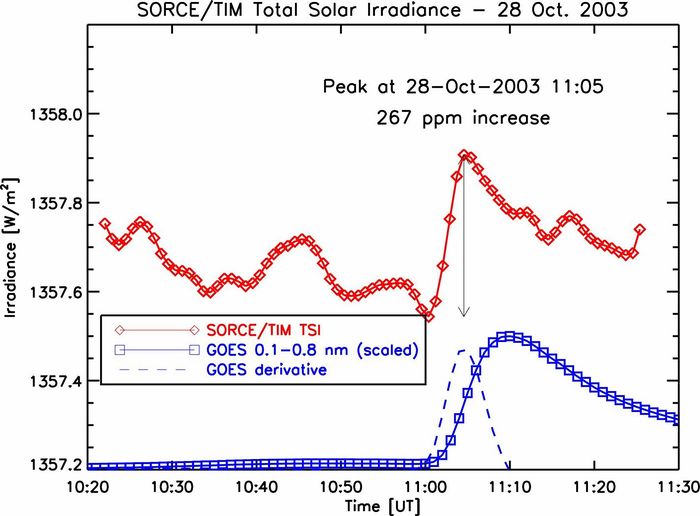 Figure 1: Total solar irradiance measured with SORCE for the X17 event on 28 October, 2003. Also shown are the GOES light curve and its time derivative.

The increase in the radiated energy seen by SORCE provides the most reliable lower limit on the energy released in a flare ever determined. There can be little doubt that the measured increase in the radiated energy all came from the flare and was part of a generally isotropic emission pattern. With those simple assumptions, it is inescapable that the flare released a minimum of that much energy. Of course, additional flare energy may not have been detected with SORCE. For example, accelerated particles may have escaped from the Sun. Also, all of the flare energy may not have thermalized and radiated away during the SORCE observations but these would only increase the estimate of the total energy released by the flare. Thus, the conclusion that the flare and CME energies are comparable seems unavoidable for this event at least.

How could solar scientists have been so wrong again? Even the early analysis of RHESSI observations had seemed to support the "flare myth", i.e. that flares are weaker than the associated CMEs. Emslie et al. (2004) had reached the "cautious conclusion" based on the analysis of RHESSI and LASCO observations of two large eruptive events in 2002 that the CMEs are more energetic than the associated flares. A re-examination of the observations in light of the SORCE result carried out by Emslie et al. in 2005 revealed that perhaps that conclusion was not cautious enough. Perhaps it was just plain wrong. They showed that if the estimated thermal energy in the hot plasma (T>5 x 106 K) that produced the soft X-rays seen with GOES and RHESSI were scaled by the same factor of ~100 found for the SORCE event, then indeed the flare and CME energies were comparable for the two events studied. Moreover, the energy in flare-accelerated electrons and ions determined from RHESSI's hard X-ray and gamma-ray measurements, respectively, was greater than the energy in the thermal plasma. This suggests that these particles must generate cooler plasma (T<5 x 106 K) when they thermalize and that the radiation from this plasma is detectable by SORCE but not by GOES or RHESSI. In this connection, it may be significant that the SORCE-measured increase in total solar irradiance actually peaked prior to the GOES peak in soft X-rays, just when the accelerated particles were at their maximum intensity (the "impulsive phase" of the flare). Observations of 50 eruptive events

More recent analysis of some 50 eruptive events, each with both a flare seen with RHESSI and GOES and a CME seen with LASCO have been analyzed to determine the total energies of the flares and the CMEs. Dennis et al. (2005) chose a homogeneous set from the three active regions that produced all of the intense activity during the 3-week period from 19 October through 5 November 2003, including 12 X-class flares and perhaps the largest flare ever recorded, the X28 flare on 5 November. For each event, the kinetic energy of the CME was determined from the LASCO images and the flare energies were determined from GOES and RHESSI observations. Initially, for each event, the total radiated energy from hot plasma (T>5 x 106 K) was calculated from the temperature and emission measures derived from the GOES soft X-ray observations by using the most modern information about the state of the solar plasma. These values are plotted as a function of the kinetic energy of the corresponding CME in Figure 2. We see that there is a general correlation with a scatter of less than an order of magnitude, significantly less scatter than has been obtained in previous correlation plots of this type. However, the flare radiated energies calculated in this way are generally one to two orders of magnitude below the CME energies. Before the SORCE observation, we would probably have stopped there and concluded that the flare energy was insignificant compared to the CME energy. However, if we use the same factor of ~100 between the radiated energy measured with SORCE and the radiated energy from the hot plasma measured from GOES data, then we see that the flare and CME energies are comparable with a scatter of about an order of magnitude. 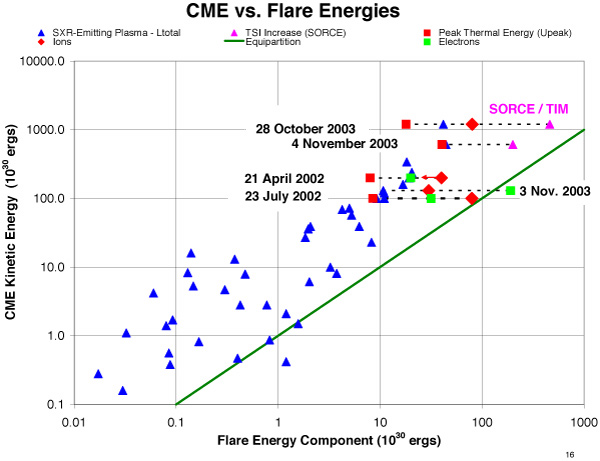 Figure 2: CME kinetic energy derived from LASCO images plotted against the energy of various components of the associated flares as indicated. The diagonal line is the line of equality between the CME and flare energies.

Support for this scaling factor of 100 comes from the RHESSI observations that show particle energies in excess of these thermal energies by an order of magnitude or more. This has been suspected since SMM days in the 1980s but new RHESSI results have lent more credence to this conclusion. Some of these particle energies are plotted in Figure 2 for the larger events seen with RHESSI to show this effect. We see that for the 23 July flare, in particular, the energy in ions estimated from the RHESSI gamma-ray measurements is itself almost identical to the CME kinetic energy for that event. Thus, it seems clear that at least for the larger events with fast CMEs and associated flares, the total energies of the two components are comparable in magnitude.

In retrospect, it may not be surprising that flare and CME energies are comparable. In the simplest model of these eruptive events, the energy is released in the corona by magnetic reconnection, with the material going up becoming the CME and the material going down making the flare. Equipartition of energy going up and going down might be expected in such a scenario. Of course, the situation is obviously much more complicated than such a simple-minded model would suggest. However, it is clear that the origins and energy sources of flares and CMEs are so intimately entwined that it is impossible to explain one without understanding the other. This is especially true now we know that flares are likely to be just as big energetically as CMEs.

Biographical note: Brian Dennis is a solar physicist at NASA's Goddard Space Flight Center, and is the RHESSI Mission Scientist and a CoI.

Retrieved from "https://sprg.ssl.berkeley.edu/~tohban/wiki/index.php/Which_are_more_powerful,_flares_or_CMEs%3F"
Category: Nugget
Facts about Which are more powerful, flares or CMEs?RDF feed