Flares (in the lower solar atmosphere) and coronal mass ejections (in the corona) have a complicated interrelationship that we have not quite fathomed yet. A flare is essentially a radiative process, but the physics closely involves mass motions and dynamical effects. Contrariwise a CME is mainly dynamical, but of course if it did not radiate detectably we would not be able to observe it very well. The standard flare model ("CSHKP", the subject of several Nuggets) expressly assumes that a CME be present, but most flares do not have CME associations and so this idea needs generalization. Ref. [1] describes how the more powerful the flare, the more likely a CME occurrence becomes.

The hot news this week is that AR 2192, which features the huge naked-eye sunspot group pictured in Figure 1, has hosted many powerful flares and no CMEs. This region produced the event SOL2014-10-24T21:41 (X3.1), which so far as we know has set a record in flare energy for a CMEless event. At S16W20, the flare was ideally situated to produce a halo CME event, Earthward-directed and possibly geoeffective, and to spew solar cosmic rays in all directions. None of this happened, so this Nugget will explore the situation a bit. 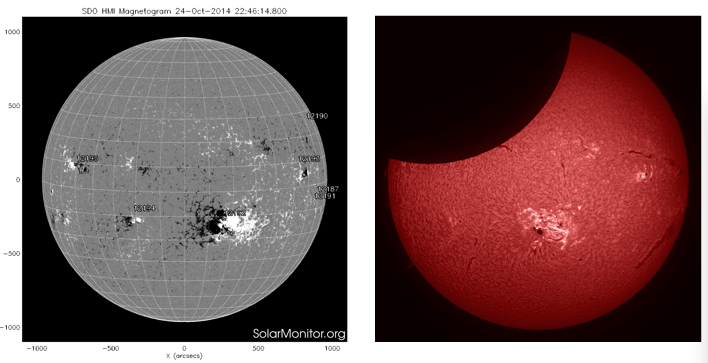 Fig. 1: Left, the [HMI] magnetogram for the day of the flare; right, an [H-alpha] image taken by Igor Ruderman in Berkeley, capturing the huge region as well as a partial solar eclipse.

As Figure 1 illustrates, several things came together with this late major sunspot region. By a small amount, its area exceeded the previous maximum since the launch of RHESSI. Figure 2 shows the development of the sunspot region's area, in comparison with the major group responsible for some of the "Halloween flares" of 2003.

Fig. 2: Left: Development of spot area in the current region, AR 2192, compared with that of the second-biggest during the RHESSI era. The fact that it's exactly 11 years later is a coincidence; the fact that its growth pattern agrees within a few percent in the first few days is also a coincidence - it seems. Right: the initial big event in the sequence, which from its timing must have come from far around on the invisible hemisphere of the Sun, and thus had a true magnitude larger than what the GOES plot shows. This event was definitely eruptive; see the SDO composite movie.

The flares have been remarkable, especially in their total ignorance of CME formation (except for SOL2014-10-14). To what extent do the CMEless flares like this resemble the standard model, most recently discussed in Nugget No. 226? Figure 3 shows an overlay of the flare ribbons from SOL2014-10-24 on an HMI magnetogram. The ribbons and other elements of the flare morphology look normal, with the only obvious distinction being the absence of the eruption and the CME. 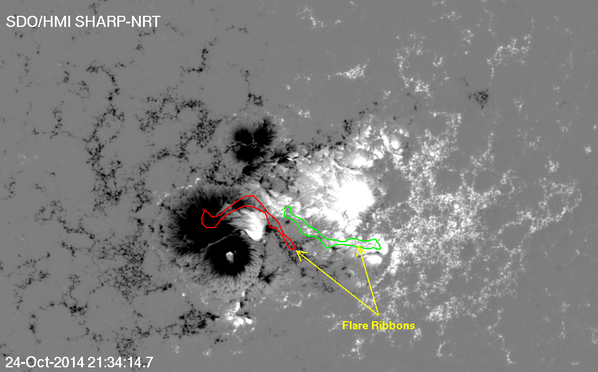 Fig. 3: Overlay of the flare ribbons on a magnetogram. The EUV images of this flare showed the usual arcade of hot coronal plasma loops connecting the ribbons, i.e. the flare morphology matches that of other major flares that did have CME associations.

Most of the features of such a model - current sheet, cusp, plasmoid eruption, opening magnetic fields, fast and slow shock waves, above-the-loop-top sources, downflows, magnetic reconnection in a detectable large-scale current sheet - simply don't appear here even though the flare has GOES magnitude X3.1. This hints strongly that most of these features can arise from a different global model. We note also that this region, at the time of writing, had produced not only the one, but at least five other X-class flares, none of which involved CMEs or SEPs.

This Nugget reports a hot topic, and at the time of publication the events are still developing. Active region 2192 has already set new standards, though: the biggest spot group since RHESSI was launched (and a nice coincidence of a naked-eye group and a partial eclipse observable from the Bay Area), and a record-setting major CMEless flare. We think that this occurrence seriously challenges standard flare models and expect that the phenomena introduced here will elicit lots of research activity.