Solar flares are characterized by impulsively enhanced emissions most pronounced in hard X-ray and microwave light curves. These light curves in even a simple, single, short-lived flare usually exhibit quite complicated structures consisting of numerous fast-varying bursts, unlike the rather smooth and gradual soft X-ray emissions. Ground-based and space missions in pre-RHESSI era have revealed the shortest time scales, from a few seconds to several tens of milli-seconds, of these bursts. A few studies correlating high cadence (yet spatially unresolved) hard X-ray observations with high cadence and high resolution optical observations have further shown that hard X-ray bursts are correlated with optical emission on time scales of about one second, suggesting that these fast-varying bursts are thick-target emissions, and that their size is within one arc-second. This is, in general, consistent with recent EUV observations showing that the perpendicular scale of a flare loop might be about one arc-second. It may be noted that these quoted values are likely upper bounds of the tempo-spatial scales as limited by the resolving capability of instruments.

Today we commonly recognize that a flare is a collection of multiple episodes of energy release on some fundamental scales, such as characteristic size of the elementary flux tubes, or the turbulent dynamics of reconnecting current sheets. As these fast-varying bursts are typically reported in hard X-ray and microwave light curves, the observed time scales are also a product of convolution with timescales of acceleration and transport of non-thermal particles in the flare environment. Whereas it is yet difficult to disentangle these different physical mechanisms involved in a single burst, there are basic observational questions to be addressed: what are the temporal, spatial, and spectral properties of these bursts, when compared with the gross properties of a flare?

RHESSI has provided unprecedented advantages for answering these questions. This Nugget studies a sample of hard X-ray flares observed by RHESS using a demodulation algorithm that allows analysis of hard X-ray light curves with sub-second time resolution. For RHESSI this is a tricky issue, since its imaging capability depends upon rapid modulations of the time-series signal (see the Nugget "How Does RHESSI Make Images?") and this image modulation needs to be deciphered properly. It should be noted that this study focuses on the few most prominent fast-varying bursts standing out from the general level of emission. That is, these particular events do not appear to be an unresolved flood of events that could make up the entire flare emission, as suggested by the nanoflare hypothesis. We call these events "hard X-ray spikes" (Figure 1). 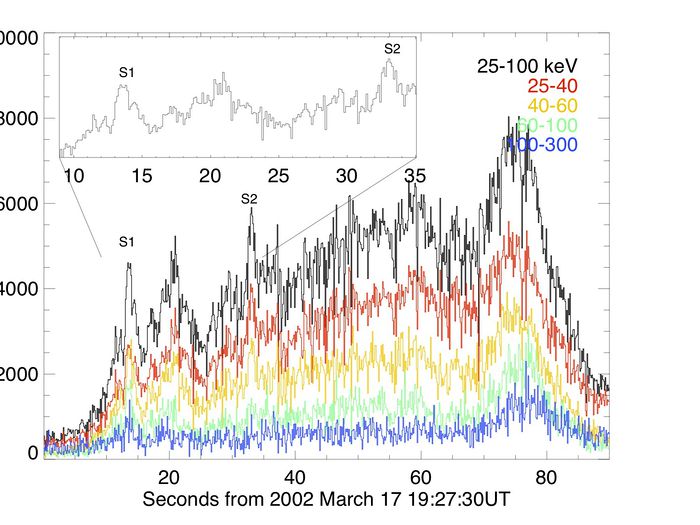 Figure 1: Examples of two hard X-ray spikes found in a flare event in a range of photon energies from 15 to 300 keV. The hard X-ray light curves are derived after applying the demodulation algorithm with 125ms time grid.

Having searched the entire flare catalog in 2002, it turns out that hard X-ray spikes can be detected at up to 100 keV in only a small fraction of flares. The spikes usually have symmetric rise and decay, and have durations below one second, which is independent of the photon energy (Figure 2). These results are consistent with the findings by SMM three decades ago. 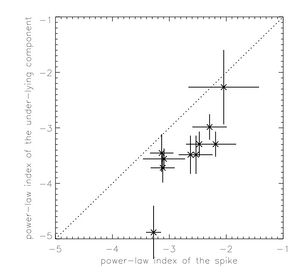 Figure 3: counts spectral indices of the spikes versus those of the underlying components.

Where are the Spikes? 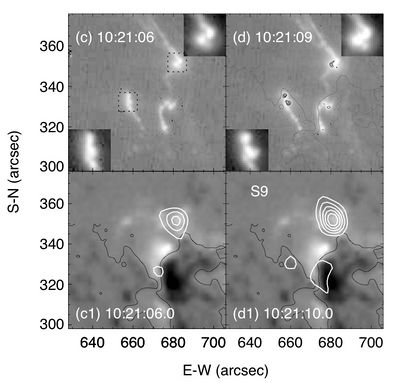 Figure 4: UV images from TRACE (top) and hard X-ray maps of 2s integration from RHESSI (bottom contours) before and during the time of a spike. RHESSI maps are superimposed on a longitudinal magnetogram from MDI. Grey curves in all panels indicate the polarity inversion line of magnetic fields. The inset frames on the top panel illustrate the details of the two flare kernels where the spike emission is located.

Very short timescales are usually associated with small spatial scales; it has been challenging to map fast-varying structures during the flare. A few different ways have been attempted to locate ten spikes out of the studied sample. Direct mapping of the spikes, as confirmed by coordinated UV and optical images whenever available, shows that the spikes at above 25 keVs are most likely thick-target emissions at conjugate foot-points of flare loops (Figure 4), and observed loop length is consistent with estimate from time-of-flight analysis.

Comparing hard X-ray and UV observations during and immediately before the spikes, we find that the spikes are basically inside or very closely attached to the sources of underlying components. The RHESSI image of 2s integration during the spike shows enhanced emission over the pre-spike source, yet the >4" map resolution does not reveal variations, if any, in the shape or location of the emission source. The better resolved UV images by TRACE (1" resolution) illustrate more clearly that, during the spike, UV emission is enhanced at a few flare kernels of a few arc-seconds, which have been brightened before the spike. These details would indicate that reconnection and acceleration events that produce hard X-ray spikes take place in the same magnetic environment of the underlying sources.

RHESSI capabilities have allowed us to continue the decades-long effort to study rapidly evolving hard X-ray bursts. These observations may hold the key to uncover fundamental scales of energy release in solar flares. The most prominent hard X-ray spikes from a sample of RHESSI flares exhibit similar temporal properties as those discovered in SMM flares in the 70s and BATSE flares in the 90s.

Given their generally harder spectrum, hard X-ray spikes are the most energetic population of elementary bursts. The ten samples that have been mapped are almost certainly thick-target emissions, mostly from conjugate foot-points of flare loops. They are produced in nearly the same location and magnetic environment as the less impulsive and less energetic bursts in the neighborhood. Should this mean that spikes are produced by a perturbation in the same macroscopic current sheet which is the master board of clusters of energy release events? Are we ready to directly associate the observed scales with a "fundamental" scale of flare? And, what indeed does this "fundamental" scale mean?