For image reconstruction on the ground (no impact on real-time spacecraft operations), knowledge of relative roll is required at all times to 3 arcmin (3 sigma). Since all sources of torque on the spacecraft are weak, the required information can be obtained with a star scanner that samples the roll orientation at least once per rotation. Interpolation between measurements allows the roll orientation to be determined at intermediate times with the required accuracy. Data from the RAS are acquired and processed for transfer to the image data processing unit (IDPU) and inclusion in the telemetry stream in a dedicated aspect data processor (ADP).

The RAS consists of a 2048-element linear photodiode array and electronics (nearly identical to those of the SAS) behind an f/1.0, 50-mm lens. A sunshade limits the FOV so that a 30° band is swept out across the sky orthogonal to the spin axis. As the spacecraft rotates, each detected star generates a brief spike in the output of one or two pixels, whose timing defines the roll orientation. For +2 magnitude stars, the detection signal-to-noise is 15:1. Allowing for Earth occultation and the recovery time from anticipated Earthshine saturation, at least one (and typically seven) such star(s) will be detected each rotation throughout the mission. Measurements of only one star, averaged over a minute, allow the roll angle to be determined to 2.7 arcmin (3 sigma). The RAS was built by the Paul Scherrer Institute in Switzerland. 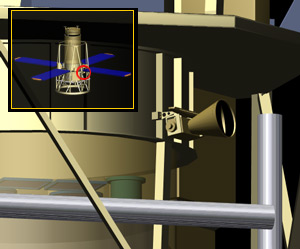 Image of the RAS system.
Retrieved from "http://sprg.ssl.berkeley.edu/~tohban/wiki/index.php/Roll_Angle_System"
Category: RHESSI