It is well established that solar flares and coronal mass ejections (CMEs) are powered by the free magnetic energy stored in volumetric electric currents in the solar corona, predominantly in magnetic active regions. The nature of these currents has remained controversial, though. Specifically, they would have distinctly different physical properties if they were "neutralized," the natural expectation within MHD theory. Full neutralization requires that the "direct" coronal currents that connect their photospheric sources and sinks be surrounded by "return" currents of equal total strength and opposite direction. In this way the total coronal current would be zero, not only for the whole active region, but also for each current-density node individually, as illustrated in Figure 1. 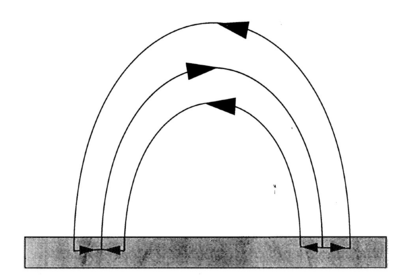 Figure 1: An idealized model that simulates the current pattern in the corona for a neutralized twisted flux loop. The central line represents a body current inside the flux loop, sheltered by an equal amperage of return current on the surface (after Melrose).

It has been debated for decades whether or not current is fully neutralized, especially in a literature debate between Melrose (Ref. [1]) and Parker (Ref. [2]). Observation alone cannot settle this debate, given technical limitations such as inadequate spatial resolution. But the existing evidence does suggest that currents are neutralized in simple, stable active regions, while more complex systems may contain non-neutral currents current (Ref. [3,4]). The buildup of non-neutralized current in active regions is accompanied by the formation of highly sheared polarity inversion lines (PIL). Such non-neutralized currents, as well as the highly sheared PIL, can be generated by flux emergence and/or surface flows that shear the magnetic field. Very often, well-organized direct current is clearly visible in active regions with these signatures, and full eruptions (CMEs) eventually take place (See Figure 2). 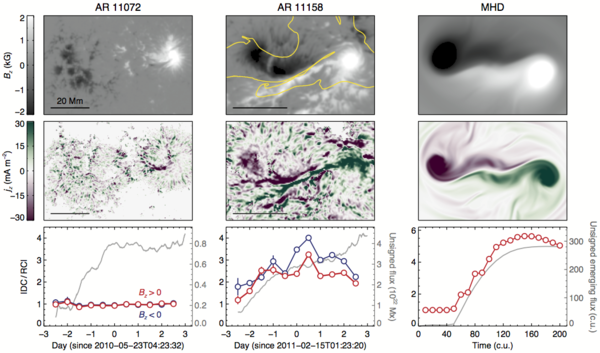 Figure 2: Left, middle: Bz and Jz in quiet AR 11072 on 23 May 2010 and in the flare-productive center of AR 11158 on 15 February 2011. No core-region mask was used for the well-isolated, bipolar AR 11072. The bottom panels show the evolution of the unsigned magnetic flux (gray line) and the direct/return current ratio, abs(DC/RC). The red curves show abs(DC/RC)^{+} from positive-field pixels, and the blue abs(DC/RC)^{-} from negative-field pixels. Error bars are estimated from the inversion-uncertainty of the vector magnetic field data (errors smaller than circles are omitted). Right: Corresponding quantities for an MHD simulation. Here abs(DC/RC) is equal for both polarities and only abs(DC/RC)^{+} is plotted. Times and flux are in code units.

We suggest that organized, non-neutralized electric currents in active regions represent the key to the occurrence of full eruptions. NOAA AR 11429 gives a another example that exhibits a net (non-neutralized) current as well as a highly sheared PIL (see the left panels of Figure 2). The region produced eruptive events. In contrast, AR 12192 was a flare-productive active region, producing more than 16 major flares (M3 class and above, including one with a record-setting magnitude. None of these were fully eruptive in the sense that none was associated with a true CME. This active region exhibited neither organized currents nor net current (right panels of Figure 2).

It is sometimes argued that mechanisms that invoke the hoop force, such as the torus instability, cannot play a role in the development of CMEs in the current-neutralized ARs because the hoop force must vanish. However, this requires the presence of a coherent and compact manner of return current, which the observations do not show (see Figure 3). The observations (Figures 2-3) do show the non-neutralized currents in organized patterns in the ARs that produce fully eruptive events (CMEs). This volumetric electric currents in the corona is believed to be the source of free energy that powers the flares and CMEs. 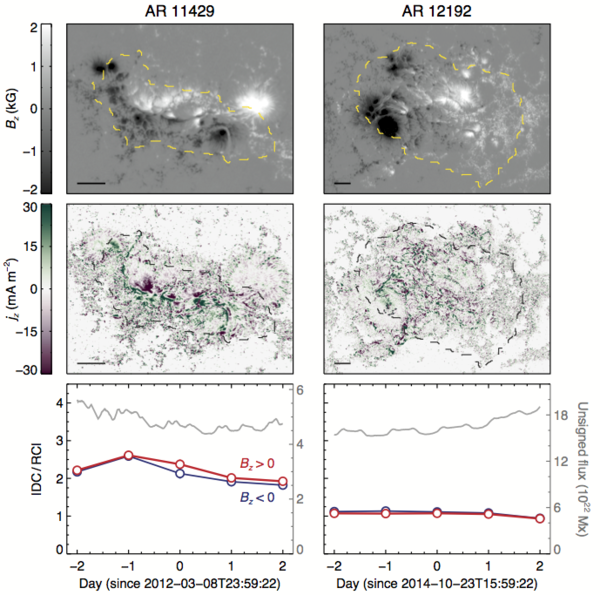 The evidence that non-neutralized currents do flow through the corona has become more compelling. In our recent contribution (Ref. [5]) we show that such currents occur preferentially in active regions that form CME ejections.

[4] "Distribution of Electric Currents in Sunspots from Photosphere to Corona"