Historically solar radio bursts were given the nomenclature of type I, type II, type II and so on as a way of distinguishing their different characteristics. Type II bursts were defined as slowly drifting features in radio spectrogram data. At interplanetary distances it is generally accepted that type II bursts are the result of electron acceleration in the foreshock of a propagating coronal mass ejection (CME) (1999 1). However at coronal heights we’re still not sure what mechanism generates the shock that accelerates the electrons: a flare-related blast wave (2) or a CME (or small-scale ejecta) propagating faster than the local fast magnetosonic speed (3). In the latter scenario the shock can form as piston-driven shock or a bow shock (4). For a bow shock, the ambient plasma is able to flow around the driver. The shock is situated at the forehead of the driver such that both shock and driver propagate at the same speed. In the case of a piston-driven shock the ambient plasma is unable to flow behind the driver. In this case the shock moves faster than the driver and the standoff distance between the two increases over time. Without radio imaging and an accurate model for the coronal electron density, it is difficult to determine how the type II and propagating shock are related. 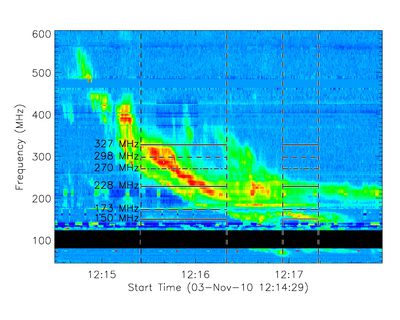 Type II’s occurring in the frequency range (150-445 MHz) of the Nancay Radioheliograph (NRH), which is capable of imaging, are infrequent. However on the 3rd of November 2010, an erupting plasmoid with an associated metric type II radio burst (Figure 1), was observed by AIA (at EUV wavelengths) and NRH. Figure 2 shows a composite difference image of AIA 131 A (blue) and 335 A (red). Multiwavelength analysis shows a hot core consisting of ~11 MK plasma, surrounded by a cooler envelope of plasma around a few MK. Plotted asterisks show the location of the type II radio burst at NRH 270, 298 and 327 MHz for the time of the AIA image. Figure 2 also shows two RHESSI X-ray sources. Since the flare is occulted by around 6 degrees, the compact source (blue) close to the limb is situated at the tip of the flaring loops, while an extended source (red) is observed high in the corona, (see this earlier nugget). 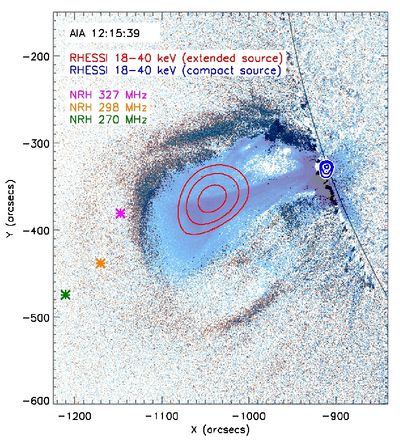 The propagation speed of the shock and the drop off in the coronal electron density dictate the frequency drift rate of the type II. Using a combination of NRH and LASCO C2 polarized brightness images (5), we are able to fine-tune and normalize an appropriate density model and then fit the type II burst to determine the speed of the progenitor shock. For a constant acceleration model the shock was found to be traveling with a velocity of ~1960 km/s (with a deceleration of -4 km/s/s). Tracking the leading edge of the plasmoid in AIA images at 131, 335, 211 and 193 A, we found propagation speeds of 670 km/s, 740 km/s, 1150 km/s and 1440 km/s respectively, showing that the envelope of cooler plasma is moving faster than the hot core.

Unfortunately, since the flare is occulted and images from STEREO B are saturated and have insufficient cadence, we were unable to investigate the flare-related energy release. Therefore conclusively ruling out a blast wave is not possible. However, the observations have shown that the shock, outlined by the type II radio burst, is moving faster than the erupting plasmoid. This, and the location of the type II burst ahead of the plasmoid (and also the presence of a whopping great plasmoid in general) are indicative of a piston-driven shock. For more details of this event see 6.