Hard X-ray emission of solar flares can enable insights into the non-thermal energetic particle properties created during these eruptive events. Depending on the coronal densities and plasma properties, a part of the non-thermal electron population can be trapped in coronal magnetic fields. Theory suggests that the coronal region at the top of magnetic loops may be the main acceleration site for electrons. At high energies, however, the bright footpoint emission from these flare loops can obscure weaker loop-top sources due to the limited dynamic range of instruments like RHESSI. Thus, flares close to the solar limb, where the footpoints are occulted, are interesting events to study because they can reveal the emission in this region in isolation. This method has revealed many things. Here, we report on recent findings of a statistical study of occulted events, comprising of about 120 flares during solar cycles 23 and 24 (Ref. [1]).

It is interesting to also study the so-called Neupert effect (Ref. [2]) in this context of coronal sources. The Neupert effect is an empirical correlation in solar flares, which relates the changes (i.e. the time derivative) in the soft X-ray (SXR) flux to the temporal hard X-ray (HXR) variations. These HXRs tend strongly to originate in the footpoint regions, leading to the "thick target" interpretation of coronally accelerated electron beams hitting the transition region and chromosphere. This in turn can lead to heating processes, increasing the overall SXR and extreme ultraviolet (EUV) emission, as observed by the GOES photometers. 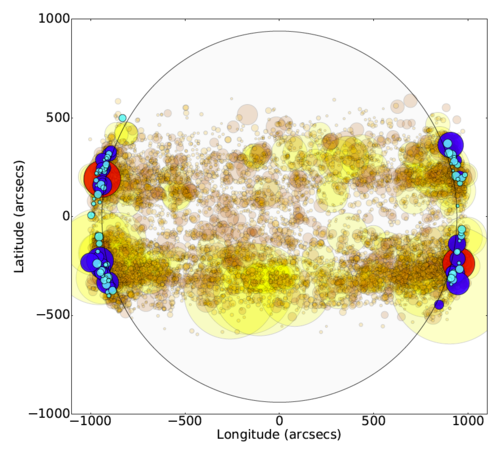 Figure 1: The solar disk positions of the partially occulted flares selected (C-Class: dark green; M-Class: dark blue; X-Class: light green) in context of all C-Class and above flares from the RHESSI flare catalog till end of 2015 (yellow and red colors). The size of the circles is scaled with the observed GOES level and the solar limb is drawn at 940" to guide the eye. We omitted outliers with latitudes more or less than +-600", respectively.

An earlier analysis studied 55 partially occulted flares from solar cycle 23 (Ref. [3]). We have now extended this list to Cycle 24 with selection criteria based on flares from the RHESSI flare catalog, requiring significant counts at energies of 25 keV and occulted footpoints as indicated by having the centroid position above the solar limb. We studied 61 flares from solar cycle 24 in addition to the 55 from cycle 23. Figure 1 shows their distribution on the solar disk.

Using GOES, SDO/AIA, and RHESSI we performed a spectral analysis, a light curve correlation between different wavelength ranges, and X-ray imaging to study the spatial relation between soft and hard X-rays.

Figure 2 shows the resulting spectral index κ versus the photon index γ. The mean values are <γ> 5.7, similar to the previously reported value of 5.4, and <κ> = 5.4. These are softer than what is found for the high-energy index of disk flares, which contain the footpoint emission with harder spectrum. 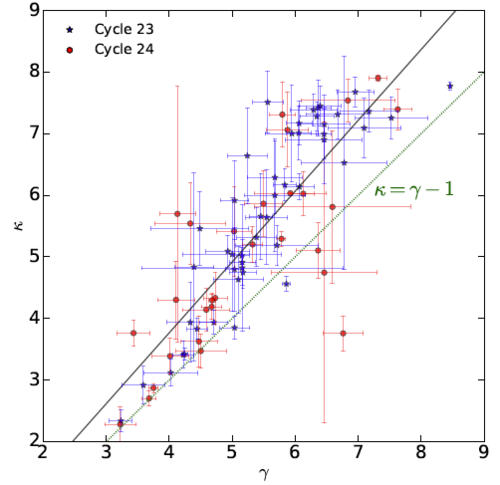 Figure 2: Correlation between the broken power-law photon spectral index γ and the electron κ index values of the thermal plus thin-target kappa fit for the data of both solar cycles (cycle 23: blue stars, cycle 24: red circles). The black dashed line shows the result of a linear fit to the complete data set (κ = 1.15γ - 0.83). The green dotted line indicates the theoretical thin-target relation.

The relation between the electron flux spectral index δ and the electron kappa distribution index is δ = κ. In the thin-target case, we expect δ = 1.15κ - 0.83 (the green dotted line in Figure 2). A linear-least-square fit to the fitting parameters gives δ = 0.83κ -1.15 (black dashed line).

Images in a low 6-14 keV and high-energy (>20 keV) range allow us to estimate the radial separation between the thermal and non-thermal emission, by measuring the distance dmax between the maximum of both sources (see Figure 3).

Figure 3: SDO/AIA 131 Å emission and RHESSI X-ray at 6-14 keV (red) and 22-30 keV (blue) contours for the M1.4 class flare SOL2014-10-22, and the C8.2-class flare SOL2014-10-31. October 22 and an C8.2 class flare from 2014 October 31. The rightmost panel shows the frequency distribution of the radial separation between the low and high energy X-ray sources (positive values mean that the non-thermal source is located farther away from the limb than the thermal component.

Although we did not find a clear tendency toward positive or negative separations between both sources,<dmax> = 0.3 Mm, which may imply that higher-energy emission is radially farther out in the corona.

Light-curves and the Neupert effect

Figure 4: Left: Light curves of RHESSI count rates of the flare SOL2014-09-11 (M2.1) at four energy ranges (red, blue, purple and green). The GOES high energy (0.5-4 Å) and low energy (1-8 Å) fluxes are plotted as solid and dashed grey lines, while their derivatives are given by the respective black lines. The counts in the two high energy RHESSI channels are multiplied by 20 and 15, respectively, to make them comparable in magnitude. Right: Correlation coefficients for the complete ensemble of partially occulted flares as calculated from the light curve cross-correlation analysis of the GOES soft X-ray time derivative (low channel: red; high channel: blue) and the

In Figure 4 we find that the 25-50 keV RHESSI energy channel correlates well with the GOES time derivative during the rise phase, with a small temporal lag. The statistical results for the correlation coefficient are significant for a large fraction of flares in the sample.

• Spectra of occulted flares tend to be softer than general disk flares with the relation between the photon and electron indexes in rough agreement with that expected in a thin-target model;

• There is no clear trend for large positive or negative radial separations between low and high energy hard X-ray components. There are, however, notable exceptions with larger separations and a richer coronal source structure;

• There is a significant correlation between the time derivative of the soft X-ray and the observed hard X-rays light curves for a large fraction of our sample, consistent with earlier studies for on-disk flares (Ref. [5]).

This latter conclusions indicates the presence of the simple Neupert effect for purely coronal sources and supports the scenario that the main source of non-thermal particles is produced near the looptop. The lags found in some flares indicate that additional processes like thermal conduction can play important roles.

[5] "Investigation of the Neupert effect in solar flares"