The original observation of a solar gamma-ray burst by Peterson & Winckler [1], in 1958, has had a remarkable resonance in the ultra-modern data from Fermi. We show this in Figure 1, which compares the fairly primitive information available in 1958 (flare event SOL1958-03-20) with the much more complete information obtained by the Fermi satellite [2] for SOL2010-06-12, some half-a-century later. The new data for SOL2010-06-12 show gamma rays above 100 MeV from a simple GOES-class M2 flare (i.e., not a very energetic flare), inferred to have originated in (p,p) nuclear interactions resulting in the production of Π0 meson production; these particles then decay spontaneously into high-energy gamma-rays. The acceleration to such high energies required no more than a few seconds, judging from the timing between high- and low-energy photon arrival times. 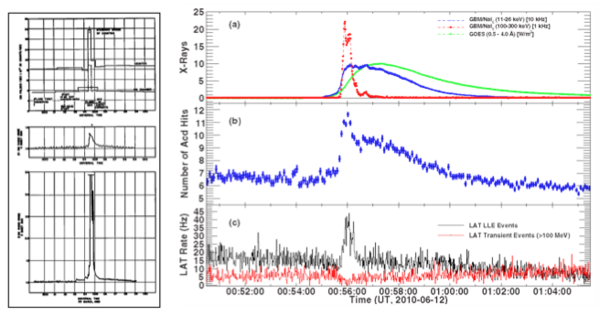 Figure 1: The first (left) and a very recent (right) gamma-ray burst associated with a solar flare. One can discern the epoch from the quality of the graphics! In the Fermi data on the right, the key timeseries it the black line at the bottom; this probably reveals the prompt acceleration of 100-MeV protons that produce gamma-rays via neutral pion decay. The original discovery event on the left, from balloon-borne detectors, probably shows photons at only a few hundred keV. These two high-energy events are remarkable in that each had a duration of only about 20 s.

The production of hard X-rays and gamma-rays in solar flares marks the impulsive phase of the event, during which the main energy release takes place. We now know this to be very common, almost a defining feature of a solar flare, although usually we do not have evidence for acceleration to such high energies. For most flares the hard X-ray time profiles, at 10-100 keV photon energies, have a more extended time profile that often exhibits erratic and spiky behavior.

A new flare paradigm derived from the mm-waves radio observations?

The brevity of the two gamma-ray bursts shown in Figure 1 is striking, and it calls to mind a series of mm-wave radio observations recorded at 86 GHz at the Hat Creek Observatory [3]. We show examples of this in Figure 2. At such wavelengths we probably detect gyrosynchrotron radiation, in sunspot-strength magnetic fields, from primary electrons at MeV energies. These electrons could be coronal electrons accelerated directly in the primary flare energy release, or they could be from Π+ or Π- mesons created similarly to the Π0s; these charged pions decay into charged muons and then into electrons and positrons, respectively; finally these can produce our favorite bremsstrahlung radiation detectable as hard X-rays. Both electrons and positrons can also radiate the gyrosynchrotron radiation observed at Hat Creek. 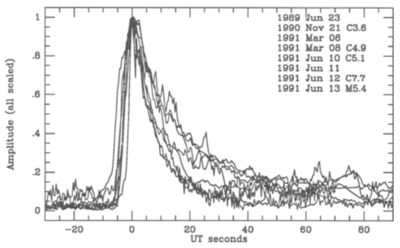 Figure 2: A set of flare mm-wave bursts exhibiting what appears to be a new paradigm: a fast rise, followed by an exponential decay with a fairly narrow range of characteristic times.

The radio and gamma-ray observations, though almost at opposite extremes of the radiation spectrum, may both be revealing the most energetic particles known to be accelerated in the flare itself. Note that the Fermi flare (Fig. 1, right panel) also produced white-light continuum in a two-footpoint structure implying closed magnetic fields. Such high-energy particles also can be accelerated in the corona, far from the flare site, by a CME-driven shock. In both scenarios the ultimate source of energy must be in stressed magnetic fields slowly built up in the lower solar atmosphere, and suddenly relaxing by the flare process.

We've speculated in this Nugget that we can identify two distinct radiation signatures with the same process: the prompt acceleration of primary protons to energies above 100 MeV in regions of intense magnetic fields. The impulse-response time profile of this process may reveal a somewhat different paradigm for flare energetics, one that has a characteristic temporal signature on a time scale of about 20 s. If this is so, we may expect to see more such events with Fermi and at even shorter radio wavelengths with the new ALMA facility. RHESSI may also have signatures of this process that have not yet been disentangled from other features it detects at its highest energies.

[1] Gamma-Ray Burst from a Solar Flare]