This Nugget picks up the discussion of the somewhat tardy Solar Cycle with the (arbitrary) identification number 24. The increase of sunspots into the next cycle maximum should be starting shortly - but hasn't yet. Here we discuss how perplexing this is, considering some of the options, and then briefly review our workshop devoted to planning for the new cycle. We also discuss an innovation - the reporting of the workshop activities in this Wiki.

Figure 1: This figure summarizes the 400 years of regular sunspot number observations. This figure was prepared by Robert A. Rohde and is part of the Global Warming Art project.

As is well known, sunspot numbers go up and down with an 11-year period, which turns out to be half of the 22-year "Hale cycle" (George Ellery Hale discovered solar magnetism, and it turns out that alternate 11-year cycles have mirror-image latitude distributions of magnetic polarity. Richard Carrington, a 19th-century solar astronomer who made many discoveries, started the counts of 11-year "Carrington cycles"). We find ourselves just finished with the 23rd Carrington cycle, and hoping for a 24th to happen. New sunspots have always before emerged roughly on schedule, except for the interesting period of the Maunder Minimum, a period in the late 17th century when sunspots almost disappeared (see Figure 1). This had many interesting implications, effects on radiocarbon dating via, for example, tree rings.

There is currently a slow buzz of excitement regarding the lack of new Cycle-24 sunspots. Could this solar minimum turn into another extended solar minimum, with possible consequences for our terrestrial climate? Or is it too early to be sure? Our workshop dealt with this question in some detail. The consensus opinion (opinions count here, since there is no workable theory of the solar cycle) holds that it is too soon to panic. We illustrate this with Figure 2, which uses the microwave radio index F10.7 to monitor the state of solar activity. More sunspots and more solar flares generally accompany higher values of 10-cm radio flux index (see Figure 1). 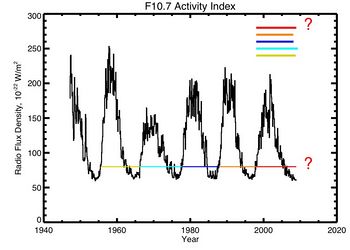 Figure 2: Variation of the 10-cm radio flux index F10.7. The red line is the current cycle, as yet not terminated - hence the red?

The comparison of cycle lengths by simply setting a threshold on this index (note that there are many ways to estimate cycle parameters, all of them quite uncertain because we have so few recorded cycles - a humble solar example of cosmic variance perhaps).

The Solar24 workshop focused on trying to get new observations right. There are many new observing facilities now available or soon to appear. In decreasing order of age we could list SDO, Hinode, STEREO, our own RHESSI, TRACE, SOHO, and of course many ground-based observatories. The advance of technology makes the ground-based observatories competitive in spite of the obvious advantages of having your observatory in space where there is no atmosphere - that is, of course, at near-UV, optical, IR and radio wavelengths. The workshop actually consisted of nine workshops, coordinated as follows in Figure 2. As shown in the Figure, the idea was to have these specialized groups cross-fertilize with each other as much as possible. This worked in some of the case, but getting this to happen 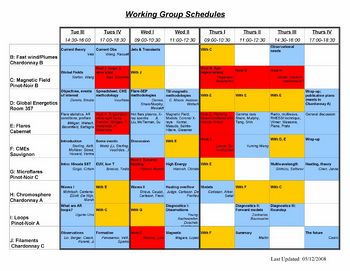 Figure 3: Schedule of workshops at the Solar24 meeting in Napa, California, Dec. 2008
is a perpetual problem in solar physics, which deals with an object that is at the same time complicated, broadly observed, and not so well understood at the level of its variations and dynamical structures.

One of the key realizations at this workshop (at least as far as author HSH was concerned) was the growing realization that we can begin to return safely to the chromosphere - safely because observing and modeling tools are becoming mature enough to help with sorting it out in a meaningful way physically. This is the most complicated and important layer of the solar atmosphere, we believe.

In times past, scientific conferences often had recorded questions and answers, scribbled in real time during the presentations. These often captured some of the more interesting insights due to the spontaneity of the recording process. This type of recording is not done much any more; part of the problem might be in uncertainty about how to handle the archival aspect of the information. Is it appropriate to cite a hasty extemporaneous remark as a piece of real scientific literature?

In the Solar24 conference we (mainly author SC) hit upon a possible alternative that we feel merits extension. For each of the sessions we tried to appoint or recruit "scribes," persons (often younger ones) who would not mind the trouble of acting as real-time reporters into this Wiki. The Wiki formatting is easy, and it is self-correcting in the sense that anybody can go over the material and judiciously improve it. The scribes' notes ideally capture the flow not only of the presentation, which of course typically would be linked as a .pdf file, but also the questions and answers. In this sense it is a modern return to the old conference style of recording the verbal interactions between the speaker and the members of the audience. Personal interaction is a vital part of how science is conducted, as a practical matter. Scientists are just now beginning to use a tool that they invented years ago (the Internets!) to rekindle scientific conversation (see for example arXiv which brings the scientific literature out of stuffy libraries and puts it freely at everyone's fingertips). Many so-called web 2.0 websites are also now trying to harness the power of crowds (crowd-sourcing) to gather knowledge and organize information (see this wiki's grandfather Wikipedia). This "crowd-sourcing" does not need to be unrefereed (see e.g., Scholarpedia).

We do not know what is happening to the new solar cycle, but we conclude that we should take a hint from the Hitchhiker's guide to the Galaxy, hold on tight to our blanket, and not panic. In the meanwhile we have learned a lot about solar activity and are a bit better prepared for its resumption. We think our Wiki is a possible new direction for science publishing and discussion, made possible by the Web technology that enables our Science Nuggets, the Living Reviews, and the indispensable NASA ADS archive access.